Communist flags appeared at an 'unwelcoming party' and a large-scale police presence blocked cars from the downtown core's 'exclusion zone'. 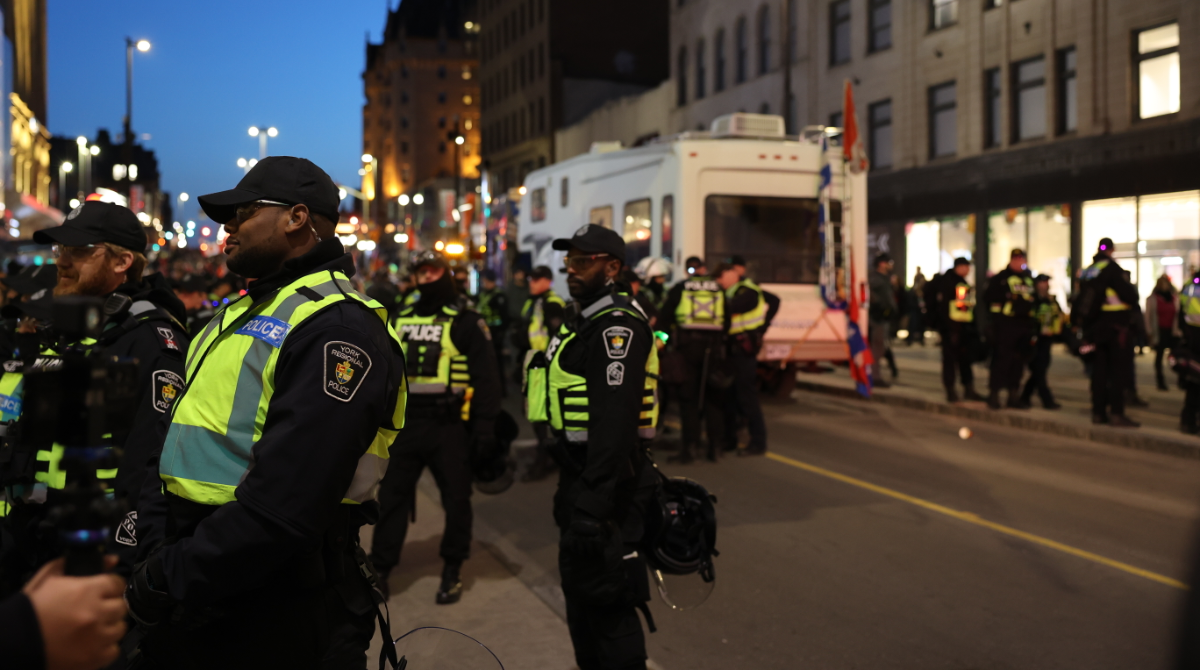 The Rolling Thunder bikers' demonstration in the nation's capital Friday afternoon was met by thousands of police and a few hundred anti-biker protesters calling themselves an “unwelcoming party.”

Rolling Thunder claims to be largely a protest of veterans who formed a convoy of their own in response to the treatment of the previous Convoy to Ottawa in February at the hands of police and government after the Liberals invoked the never-before-used Emergencies Act to seize bank accounts, trucks, fuel and Bitcoin wallets from anti-COVID mandate demonstrators who had been in the nation's capital for nearly four weeks.

Amidst the “unwelcoming party” in Ottawa's Strathcona Park, flags of the Communist Party of Canada could be seen:

Police began blocking the streets with barricades Thursday night and by Friday afternoon, police vehicles were used to obstruct lanes of traffic:

Most of the streets that give access to parliament hill are blocked off by the @OttawaPolice .

One vehicle with Canadian flags was pulled over in front of the Rebel News team:

Truck with Canadian flags pulled over by @OttawaPolice. Reason unknown. If you look closely in the background you can see a bunch of police cars with their lights on. pic.twitter.com/kRycKZa1LZ

At one point, hundreds of police could be seen surrounding a big rig hauling a holiday trailer as hundreds of supporters of Rolling Thunder looked on.

Things are getting bad in Ottawa! @OttawaPolice action with OPP-PPS. pic.twitter.com/TyeHv7QpkJ

A large-scale police presence blocked the streets, preventing cars from entering the downtown core near the Parliament buildings, which interim Ottawa police chief Steve Bell has labelled the “exclusion zone.”

Ottawa downtown, police action! The city is in fire! https://t.co/ptg2Tetq5B

Alexa's livestream of the police crackdown on the peaceful street demonstration through an organized towing operation can be seen here:

Ottawa is going even more crazy. Cars are being towed away!@OttawaPolice https://t.co/ERCOn8GJfU

Alexa is part of a three unit Rebel News team in Ottawa committed to reporting the news as it happens and telling the other side of the story the mainstream refuses to.

To see all of Alexa's reports and to support her on-the-ground journalism from the Rolling Thunder bikers' convoy, please visit www.ConvoyReports.com.