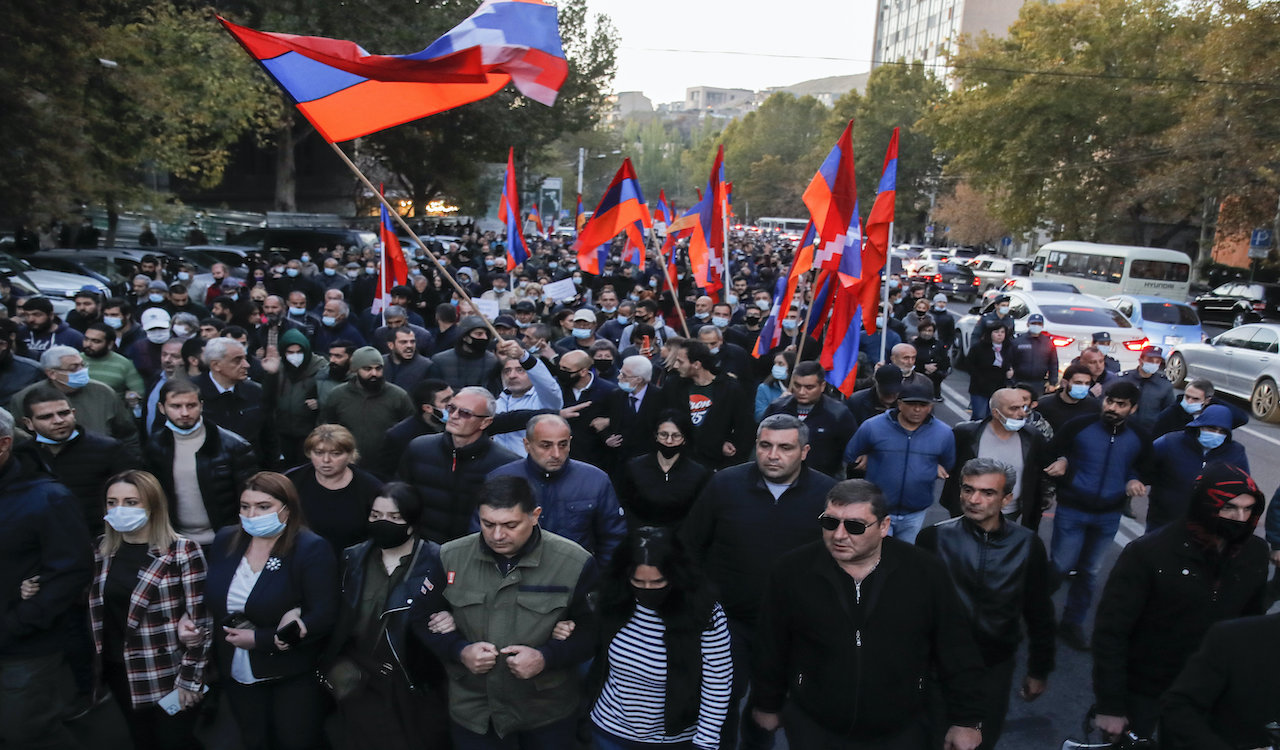 In a statement posted on Facebook today Armenian Prime Minister Nikol Pashinyan announced on late Monday that the agreement will come into effect at 1pm tomorrow, local time.

“I have signed a statement on the termination of the Karabakh war along with the Russian and Azerbaijani presidents,” wrote Pashinyan.

“I made that decision as a result of a deep analysis of the military situation and appreciation of the people who have the best possession of the situation. Also based on the belief that this is the best solution in the situation created. I'll write a message about it in the coming days,” he wrote. “It's not a victory, but there's no defeat until you know yourself. We will never know ourselves and this should be the start of our national unity, rebirth era.”

“We need to analyze our years of independence to plan our future and not repeat the mistakes of the past,” continued the prime minister. “I kneel down to all our victims. I bow down to all our soldiers, killers, generals, volunteers who protected and protected their homeland with their lives. They have saved Artsakh by their personalities.”

“We fought till the end. And we will win. Artsakh is standing.”

Pashinyan has come under fire after mounting military losses, with 17 Armenian opposition parties calling for his resignation.

The apparent peace agreement follows Azerbaijan’s capture of the key city of Shusha, the second largest in the Nagorno-Karabakh region, after weeks of military victories for Baku and bloody warfare that has seen the death of thousands of soldiers and militia. Dozens of civilians have died in the clashes.

The conflict has also seen the destruction of cities and villages shelled by both sides of the war with artillery and drone strikes on residential areas that the United Nations has described as potential “war crimes.”

The peace agreement comes after a bloody day of clashes in the region after Azerbaijan accidentally shot down a Russian military helicopter, killing two Russian personnel and injuring a third, reports the Moscow Times.

Pashinyan did not disclose exact details of the apparent peace agreement. Russian state media reports that previous efforts to establish peace failed minutes after they were signed

Since the agreement was proposed, thousands of Armenian and Azerbaijani nationals have taken to the streets in protest in their respective nations, responding to the deployment of nearly 2,000 Russian peacekeeping troops in the Nagorno-Karabakh region. As of November 11, protesters in Armenia are demanding the prime minister resign.