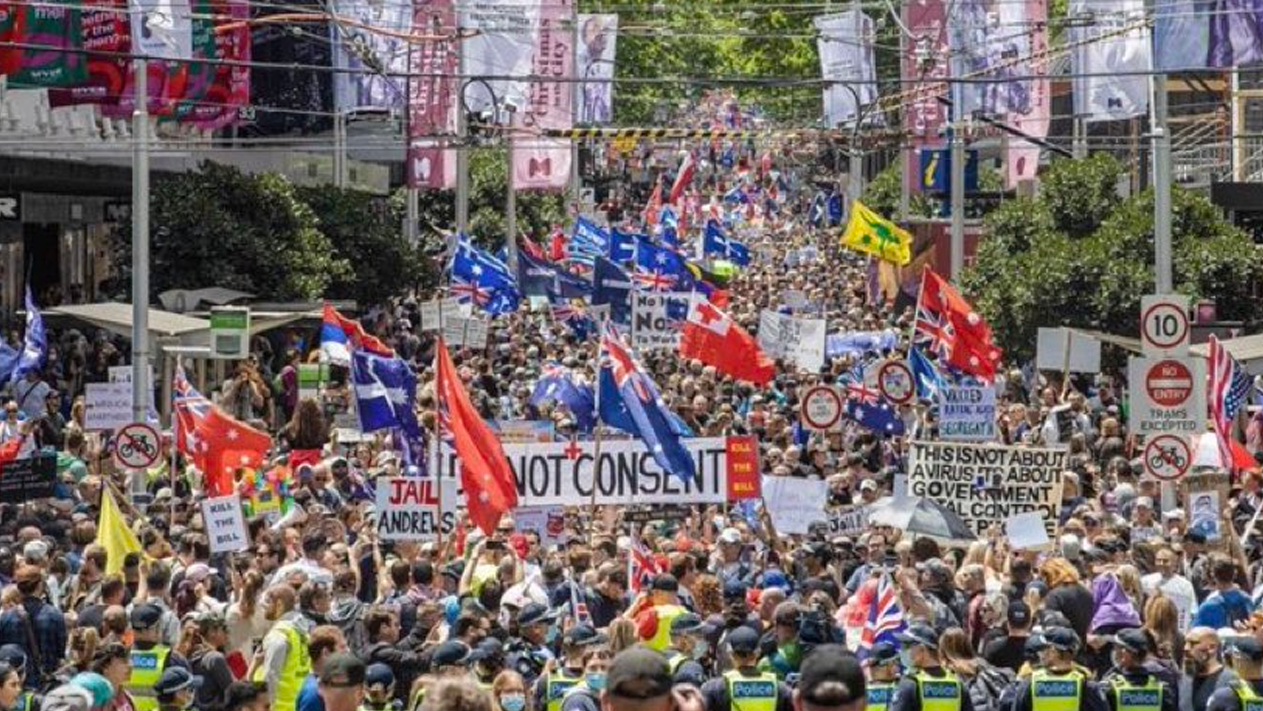 Hundreds of thousands of Australian protesters marched in capital cities across the nation in ongoing and building freedom protests against government overreach.

Melbourne, referred by many now as the most locked down city in the world, has been ground zero for swelling public concern over the Daniel Andrews' government's sensational pandemic legislation power play which has been widely condemned by the public and 60 Melbourne QCs.

Hundreds of thousands of protesters have now marched to steps of Parliament shouting 'Sack Dan Andrews' and 'Kill The Bill' in one of the biggest rallies ever seen in the nation. #Melbourneprotest pic.twitter.com/W6FA6dmoHw

It was again the scene of the nation's biggest protest, one of the largest seen in the nation since the Vietnam War protests of 1970.

There were reports of well over 300,000 people protesting in the city, spreading from the steps of Parliament House to Flagstaff Gardens where a party atmosphere filled with music and messages of unity and peace were cheered on by the diverse crowds.

“I want people to know… The people here today are not white supremacists. These are the moral, free loving people that Australia’s future depends on.”@JerryAnyuon speaks to the crowd. pic.twitter.com/YfOUW2fvt3

In contrast, Rebel News Australia chief correspondent Avi Yemini was on the scene covering the day’s events when he was viciously assaulted by a group of left-wing extremists representing Antifa.

Meanwhile, HUNDREDS OF THOUSANDS peacefully rallied on the other side of the city from ALL walks of life.

My next video exposes the REAL FASCISTS today in Melbourne.

Meanwhile, in Sydney, freedom protesters gathered in the centre of the city to oppose the state’s Covid health orders.

The crowd assembled in Hyde Park before spilling down Pitt Street Mall where various speakers fronted the rally.

Estimates place the crowd at 50,000 plus. Police were out in large numbers to monitor the event, but did not intervene.

The crowd mainly rallied against mandatory vaccination, vaccine passports, and QR-check-ins. They demanded an end to medical segregation and coercion – especially in the workplace.

Leader of the United Australia Party Craig Kelly addressed the crowd, having recently returned from Victorian rallies against Daniel Andrews and his pandemic legislation.

“Last Saturday, I was down in Melbourne and I thought I’d seen a big crowd – but I tell you what Sydney, we are giving Melbourne a real run for its money today.”

There are no reports of violence or arrests, with protesters in high spirits singing and cheering throughout the day.

At one point, the crowd demanded New South Wales politicians and the Chief Health Officer Kerry Chant resign for their role in creating punitive Covid health orders which have seen thousands of workers fired from their jobs across the state.

New South Wales Liberal Premier Dominic Perrottet attracted outrage when he pushed the December 1 opening date for the unvaccinated back to December 15, causing many people who had been holding out to lose their jobs.

Just a couple of hundred “far right extremists” out to hear @JohnRuddick2 and @CraigKellyMP et al speak today - by the sound of that chant you really are toast @Dom_Perrottet 😊 pic.twitter.com/Ox7fsLQtzj

Lead Senate candidate for the New South Wales Liberal Democrats John Ruddick spoke to Rebel News, saying that the Freedom rally was the ‘happiest event he has ever attended’.

“Everyone was in an extremely joyous mood. It was a motley crew. There were lots of different issues, but in aggregate, it was Sydney’s finest people,” said Mr. Ruddick.

The Liberal Democrats say that they stand 100% against mandatory vaccination.

Protests are set to continue across Australia in every major city each weekend until mandatory vaccination and vaccine passports are brought to an end.

There were reports of more than 50,000 protesters in Brisbane, with many battling the stifling heat to make sure their their voices were heard.

Crowds continue to build in several protests across major Australian cities, in Brisbane an estimated 50,000 have already turned out. pic.twitter.com/UpuhAh37MZ

In Perth, Western Australia, crowds of more than 30,000 filled the city's streets as protests continued to build throughout the day.

Freedom protests continue across major Australian cities. In Perth, an estimated crowd of 30,000 plus marched in the city. Video: @JohnSwanYT pic.twitter.com/5Y8jW4Zws2