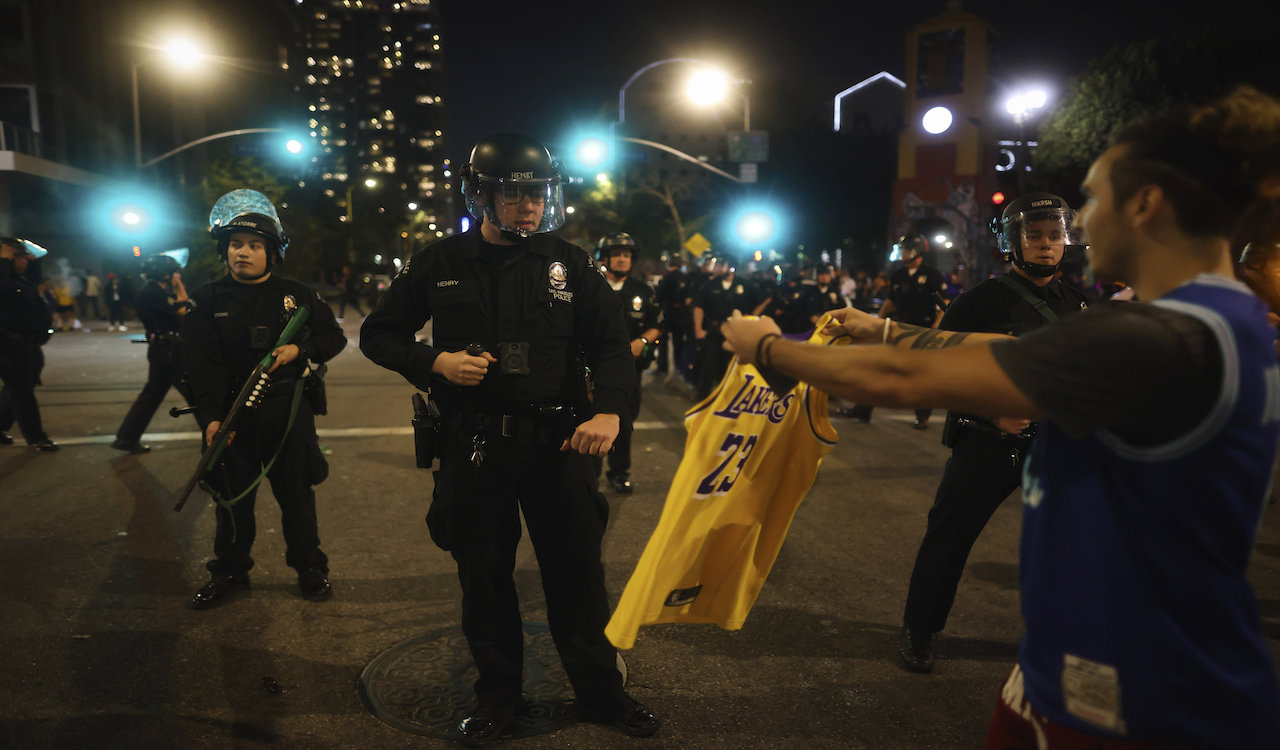 Fans of the Los Angeles Lakers clashed with police after the team’s NBA win on Sunday night.

The Lakers claimed the NBA title after a long drought that saw the team’s worst losing streak in franchise history.

Celebrations took a violent turn as Lakers fans filled the streets outside of the Staples centre, looting stores and vandalising cars. Some riotous fans set upon police responding to the scene. LAPD officers deployed ordinances to disperse rioters.

Los Angeles: More Less than Lethals were deployed & the crowd can be seen running away. #DTLA #LakersNation pic.twitter.com/Xk4sxbYVQx

LAPD are attacked with bottles, fireworks and other projectiles as they disperse a crowd with less than lethal munitions. #DTLA #Lakers pic.twitter.com/lZCygYonuW

Footage on local media captured scenes of violence as the mob set upon a police squad car, kicking it as it backed off. ABC7 reports that during the chaos, a man’s hand was brutally injured by fireworks.

“Authorities tell us a man’s hands are badly injured from fireworks. Unclear if he was lighting them off or just got hit,” reported the station.

Large rowdy crowd start hitting LAPD police cars near the Staples center during the Lakers celebration. It was soon after this that an unlawful assembly was declared. Filmed at approximately 8:20pm. #DTLA pic.twitter.com/7ZcAzcXSoq

Footage shared by Rise Images showed rioters jumping on top of a vandalized Metro bus covered in graffiti. Some rioters started a fire inside while others smashed out its windows.

Full video of the Metro bus being vandalized and set on fire. Allegedly the driver was assaulted. LAPD and LAFD responded to the scene and cleared the protesters. Certain sources state that just after this occurrence, a man was shot at this intersection. #DTLA #Lakers #downtownla pic.twitter.com/RGGuKqboJe

Other footage captured by independent journalists showed several sports cars doing tire burnouts while others did “donuts” in the street.

Donuts in front of the Ralph's and one of the biggest crowds. Lakers celebration turned into unlawful assembly. pic.twitter.com/If6hVn5Prf

It was lawless tonight for a couple hours. Tire burnouts, speeding, drinking in public, & fireworks.

Before the game, public officials asked fans to stay indoors and remain socially distanced due to the coronavirus pandemic.

"As we cheer our @Lakers' 17th championship, please remember it's still not safe to gather in groups," tweeted Mayor Eric Garcetti. “Let’s honor our city’s triumph by protecting others and making sure we don’t spread the virus. Please celebrate safely at home. Do not gather at Staples Center. Thank you!”