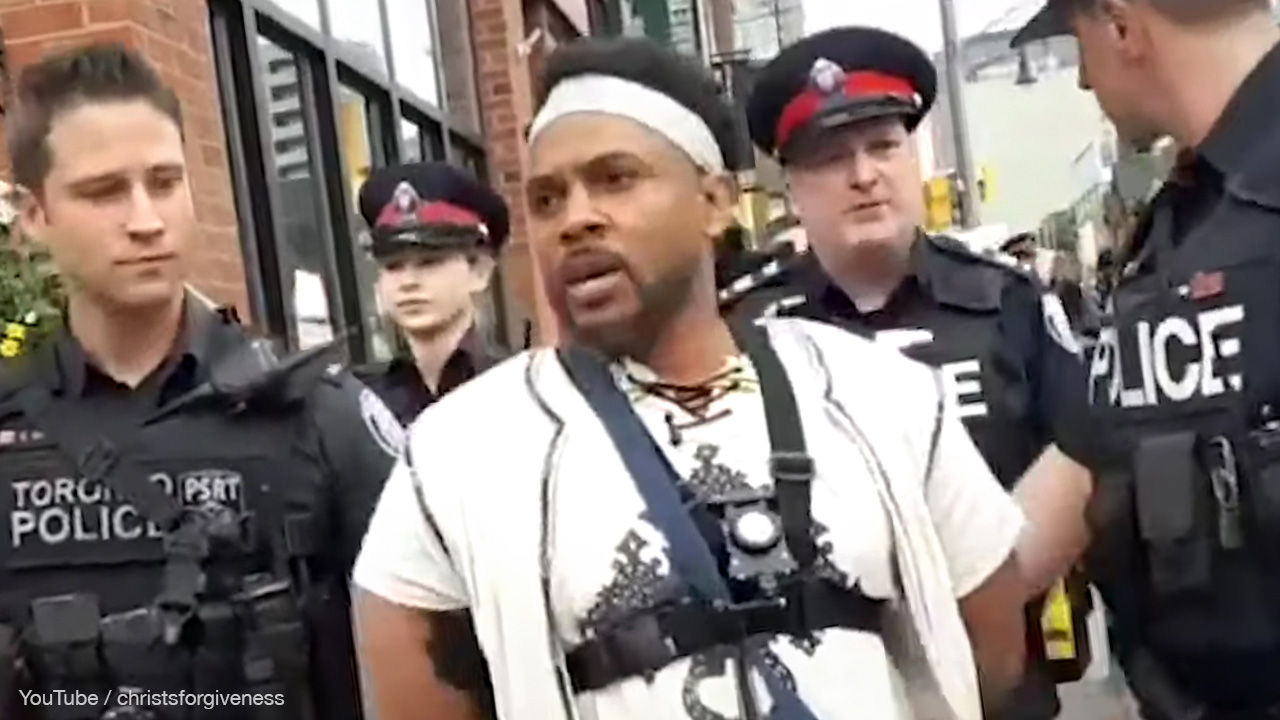 Toronto Pastor David Lynn says the charges against him have been dropped.

In a video posted on the Youtube channel for Christ’s Forgiveness Ministry, Lynn said that the Crown prosecutor has dropped all the charges against him.

Lynn announced that he appeared in court at 9am on Tuesday, May 19 to have the charges withdrawn:

“I am a free man and I want to let you know that Jesus Christ reigns victorious over all matters. The Righteous may go through many afflictions but the Lord delivers us from them all.”

Rebel Mission Specialist David Menzies has been following the mistreatment of Pastor Lynn at the hands of Toronto Police and city bureaucrats for the last year.

Lynn was first arrested June 4 2019, after an LGBT crowd mobbed him as he preached in the heart of Toronto’s Gay Village. Lynn was charged with disturbing the peace and mischief, although police initially told the media they were looking into a “hate speech” charge. Lynn was released after spending a night in the slammer like a common criminal and had to comply with bail conditions barring him from Toronto Pride events and the village.

“I didn’t say anything derogatory,” he told LifeSiteNews at the time,“I basically said, ‘God loves you, God’s calling you, there’s hope for you’. I got arrested on allegations of hate speech, but there was clearly no hate speech. And so they came up with this bogus charge of disturbing the
peace.”

Torontonians rallied outside Lynn’s court appearances and 30,000 people signed a Citizen Go petition calling for charges to be dropped.

However, a five-day trial was set for July and August 2020.

The city of Toronto deplatformed the preacher in December by prohibiting Lynn from renting any of the city’s facilities based on its “hate activity policy.”

Lynn was left scrambling to find a home in downtown Toronto for his congregation after the city abruptly kicked his missionary church out of a municipal recreation center for alleged “hate activity.”

The founder of Christ’s Forgiveness Ministries received an email October 10 from Aydin Sarrafzadeh, manager of aquatics, “immediately” revoking his permit at the Pam McConnell Aquatic Centre.

“It has ... come to our attention that most recently you have been involved in activities that are in violation of the City’s Hate Activity policy,” Sarrafzadeh wrote.