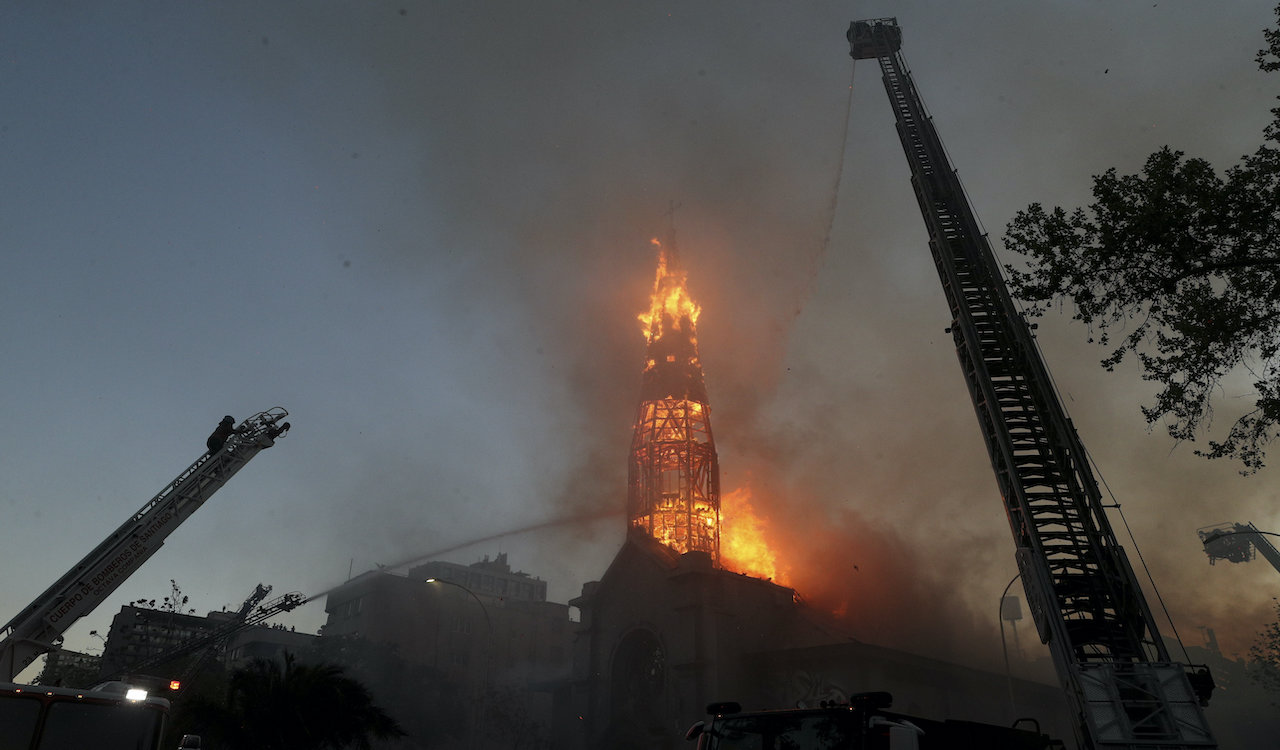 Multiple churches in Chile have been targeted by protestors in response to massive clergy sex abuse scandals, and demands to reform the dictatorship-era constitution.

Within the last year, Chile has seen 36 sex abuse scandals within the Catholic church, making more than 200 total since the year 2000.

The Archbishop of Santiago de Chile has come out and condemned arson attacks that destroyed two churches on Sunday and called on Catholics to carry out acts of reparation for the attacks.

📹VIDEO | On Sunday, Oct. 18, groups of hooded protesters entered two of the oldest churches in #Chile’s capital city, setting fire to the St. Francis Borgia Church and to the Church of the Assumption.
Read more: https://t.co/OMQIpeZHlT#Catholic pic.twitter.com/l4reQ5rS99

Groups of hooded protestors entered two Churches in Chile’s capital city on Oct. 8, setting fire to the Francis Borgia Church and the Church of the Assumption of the Blessed Virgin Mary. Both churches were among some of the oldest in Santiago.

As the Church of Assumption’s spire collapsed as the church burned down, protestors outside the building cheered.

The protests came as demonstrations across the country called for the reformation of the dictatorship-era constitution and accountability for far-reaching Church sex abuse scandals, marking the one year anniversary of large anti-government protests that took place across Chile.

In a statement published on Sunday, Archbishop Celestino Aós condemned the attacks, writing:

“Violence is evil, and whoever sows violence reaps destruction, pain and death. Let us never justify any violence,” for political or social purposes, the archbishop stated. "The poor are the most affected by these acts of vandalism,” the archbishop said, expressing solidarity with parishioners from both churches destroyed by the fires.

Aós called on Catholics not to lose hope or faith, because "love is stronger."

“Let us not justify the unjustifiable. God does not want violence. We will come together to do acts of penance and reparation as a believing community,” he concluded.

In 2018, all of Chile's Bishops resigned from their posts in a historic move unprecedented in the Catholic Church.

The mass resignation followed a three-day emergency summit at the Vatican after Pope Francis received a 2,300 page document detailing extensive child sex abuse in the Chilean Catholic Church. One of the head Bishops, Juan Barros, had been appointed in 2015 amid outrage that he had covered up the pedophile abuses in Chile's churches.

In 2019, Chile removed the statue of limitations on child sex abuse by clergy, just as Chile's Public Ministry announced it was investigating more than 150 claims of Catholic church sex abuse.