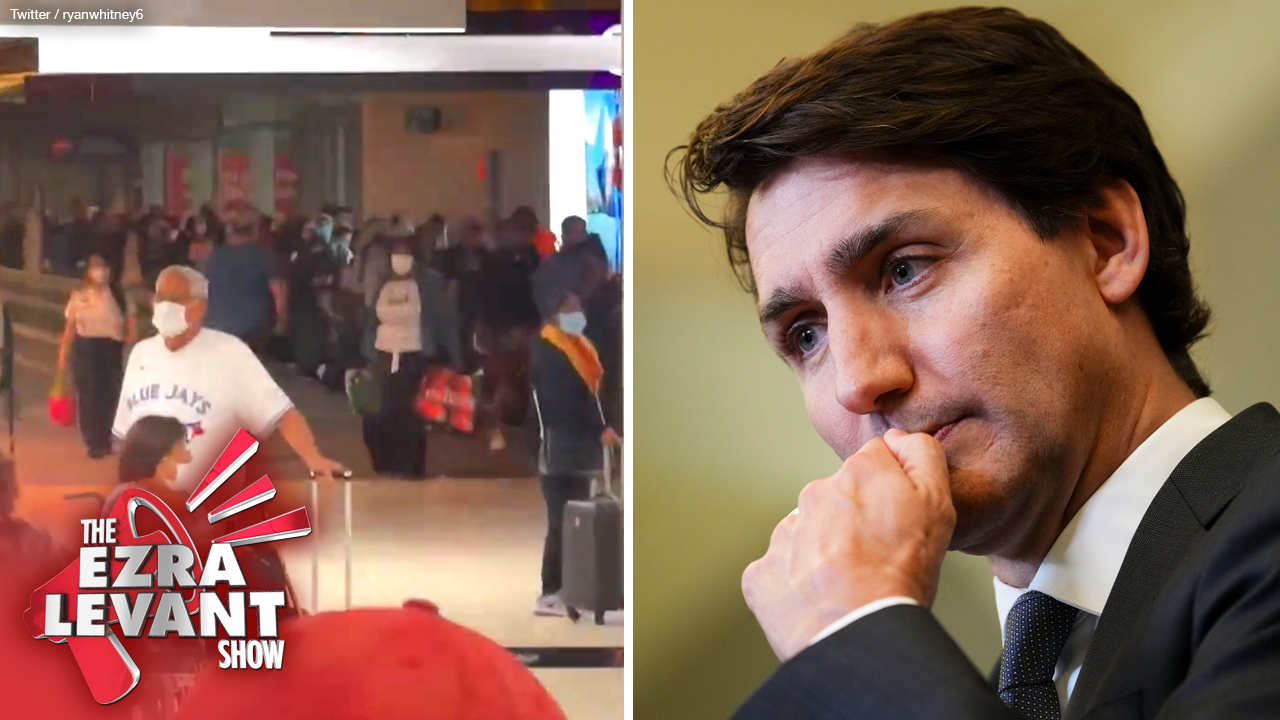 I haven’t flown in a very long time. When we sent a team of journalists to Davos, Switzerland to cover the WEF and the WHO Assembly, you might have noticed that none of them were Canadians — our reporters were from Australia, the UK and America.

So it’s with a small degree of schadenfreude — that’s the German word for taking joy in someone else’s misery — that I see stories like this from airports. I have no malice towards those who are flying while I am not allowed to do so; I don’t wish to deny them their right to choose to take the jab, just as I don’t want my own right not to take the jab to be denied. But if I’m in the caste of untouchables, if I’m segregated, a second-class citizen, I can at least comfort myself by knowing that those who have complied with Trudeau’s demands, whether for their own reason or his reasons, they’re not really doing a lot of flying themselves. Because our airports are in a melt-down.

Look at this video, from yesterday, this is an American citizen, a sports journalist, who was simply trying to get home from Edmonton to Boston.

Listen to this story — this video, as I say this, has had just under two million views:

I live at Toronto Pearson International airport. The worst place on earth. I smell so bad. pic.twitter.com/PfdnHcO7Ad

He had a few more tweets that were painful and unbelievable. Here’s how it ended, finally:

It’s over. I want to thank everyone for their Ts and Ps and the amazing chiclets listeners who reached out to help. Best fans on earth. The exact opposite of Pearson International Airport. God bless anyone who ever has to step foot in that hellhole pic.twitter.com/zH5tksOFFr

I was reading about schadenfreude — or gloating — and psychologists say it comes from aggression, rivalry or justice. As in, you hate someone and want to see him fail; or you have a rivalry, so it’s personal; or you think he had it coming. None of those apply here. He’s a good guy, a foreign reporter who had the worst travel experience of his life. So I take it back, I don’t take schadenfreude from it. I’m not taking joy from his suffering. What’s he got to do with it at all? He’s an American who wanted to visit us, seems like a good guy, and he had the worst experience, and now millions of people know about it.

And I don’t even really feel schadenfreude for Canadians who are flying. Why should they be punished for wanting to get back to normal? The fact that Trudeau treats them like first class citizens and me and millions of others as second class citizens, isn’t their fault. It might be nice to see a bit of solidarity, but really, if the people whose job it is to stand up for our freedoms don’t, why should normal people? The media; the courts; public health doctors; the airlines themselves. If they’re silent, why should a normal person speak out? To do the right thing, of course. But what about those who are literally duty-bound to fight this? Where is the CEO of Air Canada himself?

We saw that brave tweet from WestJet the other day — remember, he’s new to the job, new to Canada, just started, so he doesn’t know that the Canadian way is to be compliant and submissive. Air Canada knows better. So much for corporate citizenship. In Canada, again, that means being obedient.

Seriously, who on earth would come up here unless they absolutely had to?

Duncan Dee was the COO of Air Canada a decade ago — his job was to literally make the planes run on time. He knows logistics and schedules and all of the behind the scenes planning. I’d like to read a series of tweets from him to you, each one a fascinating lesson:

Airlines are not configured to deal w/ 3-4 hr security & customs delays. That crew that was scheduled to operate your flt? They’re out of duty time because the flt they operated this morning was held off gate for 2 hrs.

But look at this.

There’s no greater coward, no greater follower, no more conventional thinker in this country than the mayor of Toronto, John Tory. And he was a mask fetishist of the first order. So if he’s calling for change, you know it’s safe. Naturally, he cares more about an ex-NHLer, than an ordinary person. He’s a snob, naturally.

So yeah. I look at the pain and disaster and dislocation. And I laugh, because I can’t be a part of it. And I hope that those who are being unfairly punished by it — and Liberals who are too stupid to anticipate the consequences of their own votes — hopefully their discomfort and inconvenience is enough to change the rules in a way that our courts and media and public health officers would not do.

GUEST: Alex Stein (@AlexStein99) was suspended from Twitter after his coverage of the Drag The Kids To Pride event in Dallas, Texas this weekend.