Who is the populist mob: lockdown skeptics, or the forced vaccine people? 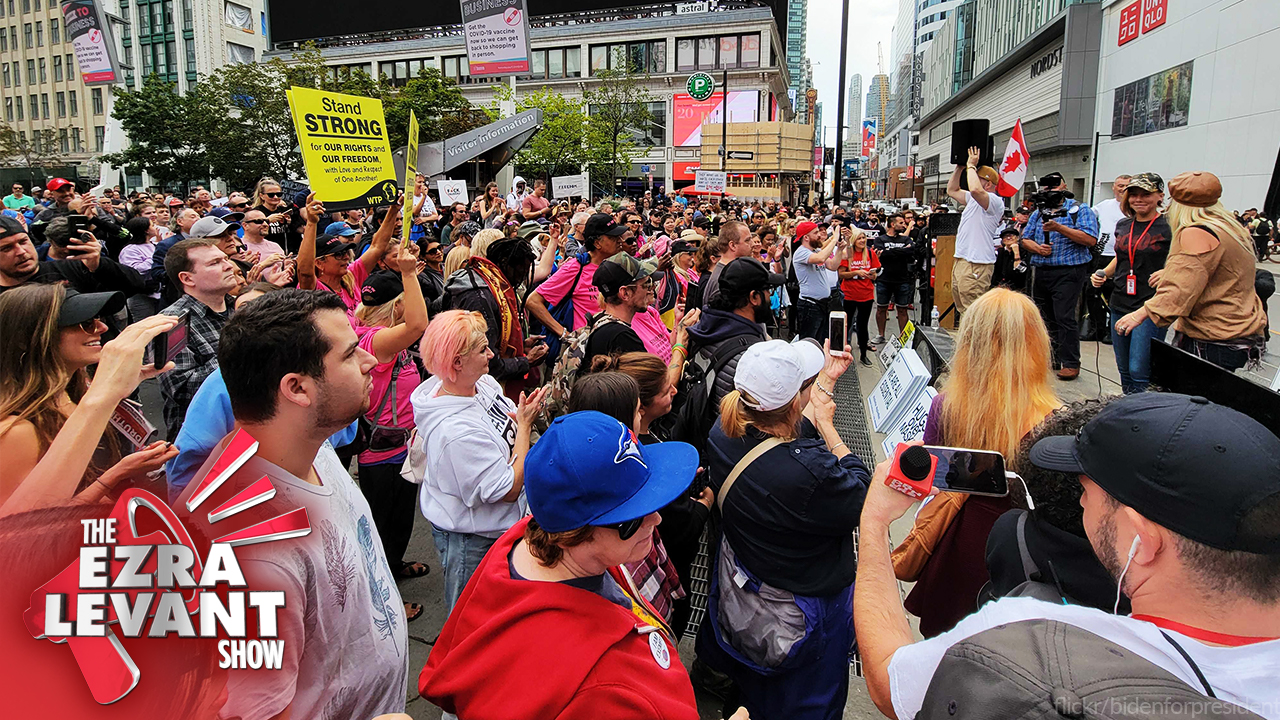 For most of my life I’ve been called a populist, and I’ve accepted that as part of my identity. I think I’m conservative, too. And I have other ideas. But to me, populism was what Preston Manning talked about in the Reform Party, that I joined as a teenager — as he called it, the common sense of the common man. He sometimes used other phrases too — bottom up decision-making, as opposed to top-down decision making. Skepticism about elitists. And let me explain that word: not necessarily hostility to someone who is elite, as in “the best”. Like an elite athlete. You can be elite, you can be the best, the smartest — and still not be elitist. Elitism is a kind of snobbery, an assumption that you’re better than someone, morally, and so their point of view doesn’t count. That’s different from being an elite surgeon, let’s say.

Elitism over-values credentials; they over-value symbols of pedigree. I see it all the time in journalism — you know, I think we only have one journalism school grad at our whole shop here, whereas I’m guessing you can’t get hired at the CBC without one. But I know who the best reporters are on any given day, and it ain’t the government journalists at Trudeau’s state broadcaster.

Being populist to me means listening to people who actually work for a living, not just those who have the luxury lifestyle of being paid to give opinions, which really isn’t work. One of the things that bothers me about elitists is their refusal to use plain language. And I don’t believe it’s because they’re smarter; smart people believe in communicating effectively and clearly. The over-use of jargon, the invention of fake words and using complicated words where simple ones will do, isn’t about improving communication, it’s about making it harder, to keep out outsiders. Use jargon; use acronyms; denounce other people’s language as obsolete or even racist. That’s a form of elitism.

William F. Buckley, who was quite an intellectual, once said he’d rather have the country run by the first 100 people in the Boston phone book than by the faculty of Harvard. I’m sure he meant it — would any of them have any real life experience making ends meet; having to deal with losing a job; having to live in parts of town where crime was a factor.

I think one of the reasons why Jordan Peterson is so popular, and one of the reasons he is so hated amongst other professors, is because he uses plain language; and he speaks in practical terms; and he believes in simplicity — his first instruction being stand up straight; his second being make your bed. That’s so different from the deliberately foggy words and meaning of most professors. The fact that he’s a hero of the people makes him even more despised by the fancy folks. Remember, they tried to drive him out of the University of Toronto when he dared to dissent.

So I have always liked being populist; and I found that it coexisted fairly well with my beliefs in conservatism — by that, I usually meant smaller government. A belief in elitism is a belief in the experts and that they not only know best but that they have higher morals than the lowly do. Populists by nature wouldn’t want to yield too much to the state.

You can see how all this would apply to the pandemic, too. I think, in the early days, everyone listened very carefully to the experts, as we trusted in their excellence, their deep knowledge. But we’ve since learned that they had no clue either. Scott Gottlieb, who was the FDA commissioner, admitted that the whole social distancing, six feet thing, was just made up — no-one actually knows where that comes from.

So do these experts really know what they’re talking about? And put aside expertise — are they actually corrupted? Now we learned that Fauci himself was deeply involved in Chinese research into weaponizing viruses, and that he lied about it to Congress.

He’s not the only liar; more and more we see the public health bureaucrats are just unelected politicians who happen to have a medical degree. Here’s Saskatchewan’s health bureaucrats telling an untruth about the virus — it doesn’t affect everyone equally; it affects the old and the fat and the sick, not the young, fit and healthy. Here’s Alberta’s health bureaucrat saying she’s going to count anyone staying home sick for any reason as a COVID case, without evidence.

So experts have put their expertise to the service of the state. I won’t go over this again, we talked about it the other day especially in regards to doctors.

But my point today is how the populists have been the skeptics. And the only party in Canada that has been opposed to the lockdowns is the explicitly populist people’s party of Canada, and its leader Maxime Bernier. So yeah — I’ve accepted that the populists are against the lockdowns. The elitists are for it — because of course they haven’t lost a day’s pay; if anything they’ve had more pay, and more power.

But populism, according to its critics, is akin to a mob. It’s violent. It’s irrational. It’s a kind of superstition. It’s mean; it’s the worst of us; it’s wild.

To the elitists, who are challenged by it, it’s a mob — which they simply define as anyone they can’t control.

But are populists, at least on the lockdowns and the pandemic, are the populists the wild ones?

We have probably covered 100 different anti-lockdown protests across Canada in the past 18 months. I have never seen violence, against people or property, even once, by a protester. Have you? I have not, and our dozen reporters covering them have not.

Except: by the police. In fact, I have seen the worst police violence of my life in these anti-lockdown protests. In Canada; in the UK; in Australia — they’re the worst. Violence en masse. And violence, arresting individual people, often women and old people, simply for not wearing a mask, or something like that.

Do you see where I’m going with this? The populists, the people, the skeptics, they’re not violent. They’re not a mob — the paramilitary enforcers of the elitists are.

But let’s move away from police and protests. What about the state itself?

What do you call it when the state — even if it has a majority of the population on board, and I concede that they likely do, having scared the wits out of everyone — what do you call it when the government, embolden by the majority, abuses the civil liberties of the minority? And not just in some trivial way — social distancing was bad enough; masks were bad enough. But I’m talking about forcing people to undergo a medical procedure that is still being tested; for which we know there are side effects including death.

I saw this story the other day in the Toronto Star, raging against an Ontario mayor who asked a woman about her menstruation — he was trying to see if she had a side-effect from the vaccine.

And the star was raging against this gross invasion, violation of her most personal, private, details.

And when they were done that, they went right back to demanding that you, and me, and everyone, show everyone and anyone our most personal, private details, on demand, every day, if we want to go to work, school, a restaurant, a train or plane, whatever.

And who stops mobs? Police, usual. But they are the mob. Ask this lady: Imagine that — police smashing a woman for sitting on a park bench drinking tea — asking for our Avi Yemini to help her. Who else do you call when the police are the criminals?

But if police won’t stop mobs, maybe the courts will. Have they? The courts didn’t even stop Trudeau’s covid detention facilities at airports. The federal court of Canada, and I know because we were in court for that, they said the three-day imprisonment, on pain of a huge fine, whether you were sick or healthy, the court said not only was that not unconstitutional, but it wasn’t even a detention. It wasn’t even a violation.

Populists are denounced as violent; as harmful; as an unruly mob; as the threat to others; as man in the state of nature — ungoverned, they commit a war of all against all, which is why we need the Leviathan, to rule the mob.

But I put it to you that in fact the populists, the dissenters, the protesters, the objectors — they’re the peaceful ones. They’re the ones respecting your autonomy, your privacy, your bodily integrity. They’re not the ones steamrolling over you — and steamrolling over our civil liberties and our charter of rights to get to you.

Keep that in mind, as Trudeau introduces his next mob rule tactic — his censorship plans. Silencing opponents — that’s a mob tactic. But the elitists are going to use it. To protect against “harms”, they’ll say.

Sure I’m a populist. But I’m not a violent mob. That’s the government in Canada these days. It’s an ugly thing.

GUEST: Bree A. Dail (@BreeADail on Twitter), the correspondent for the Epoch Times in Rome, Italy.