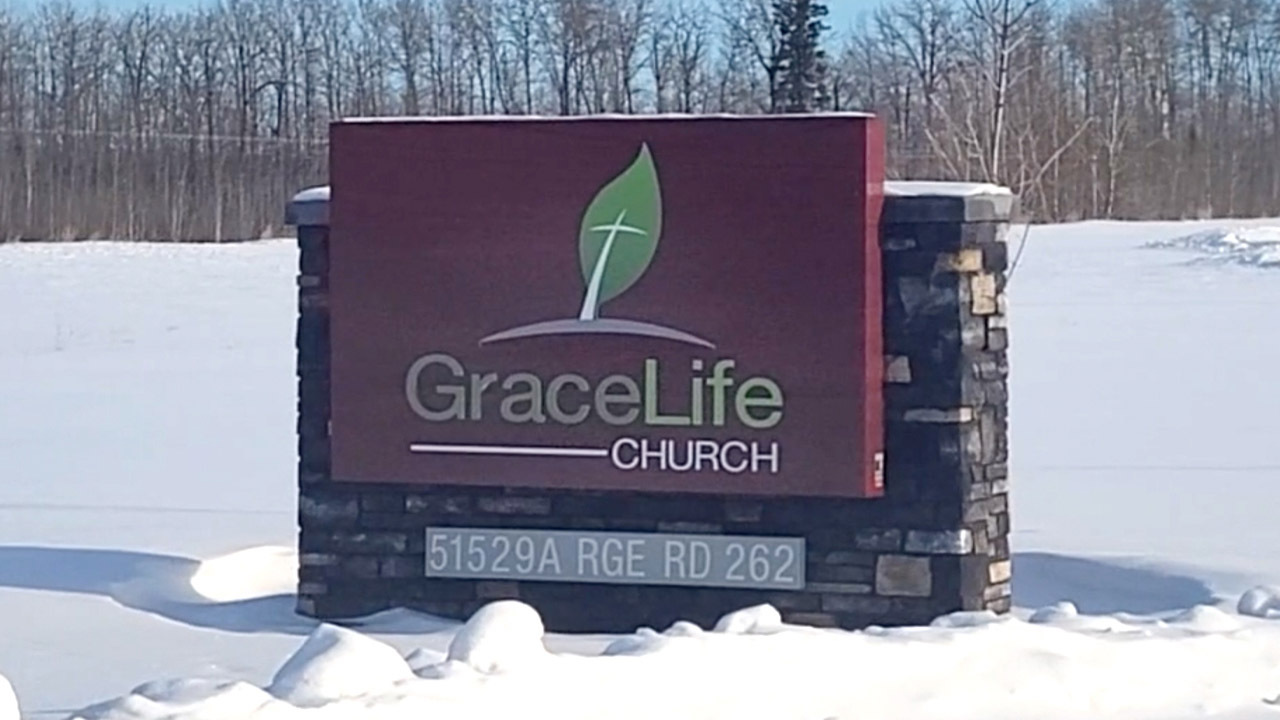 Pastor James Coates was held for nearly five weeks on charges related to his refusal to turn congregants away from GraceLife Church. Pastor Coates still has one final hurdle to clear when his charge for violating health restrictions heads to court in May. Please sign our petition if you agree that all the charges should be dropped.

Pastor James Coates was held for nearly five weeks on charges related to his refusal to turn congregants away from GraceLife Church. Pastor Coates still has one final hurdle to clear when his charge for violating health restrictions heads to court in May. Please sign our petition if you agree that all the charges should be dropped.

GraceLife Church was seized Wednesday by Alberta Health Services, in a dawn raid on the property.

In this exclusive interview, GraceLife Pastor James Coates reacts to the confiscation of his church.

The Parkland County church has rejected the lockdown restrictions on places of worship that cap attendance at 15 per cent of fire code capacity, along with mandating masks and social distancing, saying that the public health orders restrict their ability to practice their faith.

The non-compliance with COVID rules led to Pastor Coates being arrested, released and then taken into custody for 35 days, held at Edmonton's maximum security Remand Centre for breaching the public health orders.

The church was issued a closure notice in January, however, it continued to operate at nearly maximum capacity every single week, including during Pastor Coates' incarceration.

On Wednesday morning, at approximately 6:00 a.m. local time, RCMP, private security contractors from Paladin and a temporary fencing crew from Fast Fence moved in to erect chain link fencing surrounding the church, and a police checkpoint to prevent congregants and supporters from setting foot on the property.

Coates tells Rebel News that neither he nor his congregation will be deterred from gathering, even though the church property is now subject to round-the-clock occupation by police and security.

Rebel News will be on hand at GraceLife on Sunday to report on if and how services will be held.

EXCLUSIVE: Pastor James Coates sits down with Rebel for first interview after his release from jail

Pastor James Coates and his GraceLife Church west of Edmonton have become the focal point of the fight for religious freedom and to protect worship from unreasonable intrusion by the government.

Coates spent 35 days inside Edmonton's maximum security Remand facility for breaching an undertaking that would have required him to abide by public health order restrictions on worship services. The restrictions, had he complied, would force him to limit his congregation to just 15 per cent of fire code capacity, impose mask wearing on congregants, and force those who attended his church to social distance.

Coates was taken into provincial custody February 16 where he was held until March 22 when his lawyers from the Justice Centre for Constitutional Freedoms were able to come to an agreement with crown prosecutors to see the breach of undertaking charge resolved with a $1,500 fine and one day served in jail.

Coates still has trial May 3–5 for failure to comply with the public health order.

Rebel News had the last interview with Coates following his February 14 sermon in which he explained his reasoning for violating the public health orders. He saw his position as obedience to God and the only position that he could in good conscience take.

Sunday after Coates returned to his congregation, he again sat down with Rebel News for his first interview post incarceration.

We discuss what his days were like on the inside, if he was able to continue his Christian ministry inside the jail, his message for his jailers, and if he would do it all over again.

The pastor was held for nearly five weeks on charges related to his refusal to turn congregants away from GraceLife Church. Sheila Gunn Reid was on the scene in Edmonton yesterday when the pastor was finally released from detention, and captured this footage.

Pastor Coates will have one final hurdle to clear when his charge for violating health restrictions heads to court in May.

Please sign our petition if you agree that the charges should be dropped.

According to the Justice Centre for Constitutional Freedoms, Pastor James Coates of Edmonton's GraceLife Church is set to be released in the next few days after Crown Prosecutors have agreed to withdraw all but one of his charges related to keeping his church open during the province's COVID lockdown.

Pastor James Coates' bail review has just been denied in an Alberta courtroom.

The pastor will now remain behind bars awaiting his May trial.

According to a release from the Justice Centre for Constitutional Freedoms,

...Justice Peter Michalyshyn of the Alberta Court of Queen’s Bench in Edmonton has ruled that Pastor James Coates of Grace Life Church must remain in jail for the next eight weeks pending his trial, unless he agrees to abide by health orders that violates his Charter freedoms of conscience, religion, expression, association and peaceful assembly.

This is a dark day for religious freedom, Charter rights and Albertan Premier Jason Kenney (who once fought for religious rights).

Today was the second portion of the bail review hearing, and this was the result: Pastor James Coates is stuck behind bars, likely until he has his trial until in May. For a crime that is not going to result in jail time, even if he is convicted.

GraceLife, near Edmonton, Alberta, has been the site of Christian resistance to the medical tyranny of public health orders restricting public gatherings including religious services.

In Alberta, religious services are limited to 15 per cent of a building's fire code capacity. The restrictions on attendance are meant to mitigate COVID case counts, even though the numbers have plummeted and hospitalizations are down to less than half of what they were a month ago.

When GraceLife refused to turn away congregants to meet the arbitrary 15 per cent rule, and when the church did not force congregants to wear masks, it was put under weekly surveillance by local police and Alberta Health Services inspectors.

Pastor James received a $1,200 fine for violating a public health order, and eventually, when he continued to defy the 15 per cent capacity restriction, an executive order from the chief medical officer of health to close the church was issued.

That piece of paper meant nothing to a congregation and a pastor that are compelled by their faith to gather together to worship every week, and so they've continued.

On February 7, Pastor James was arrested in his office for holding services. He was released and the following Sunday, February 14, he again held services while local RCMP waited outside.

However, the police did not arrest Pastor James again last Sunday. Instead they asked him to come and turn himself in on the following business day.

He turned himself in on Tuesday morning.

Pastor James remains in custody. His lawyer, James Kitchen of the Justice Centre for Constitutional Freedoms, explained to Rebel News in an exclusive interview that the pastor cannot in good conscience comply with a condition of his release on bail: to not hold religious service on Sundays.

The pastor is now at the Edmonton Remand Centre in 14-day COVID quarantine, which all new inmates experience as part of their intake. He's isolated and will be kept in solitary confinement for the next two weeks, before he is allowed into general population as his case winds its way through the system.

The Remand Centre is a maximum security prison where the worst of the worst are held because they don't qualify for bail, being too dangerous to be released while they await trial.

The Alberta correctional system has released hundreds of prisoners because it has been considered too dangerous for low-risk offenders to remain behind bars during the pandemic. Yet, the same legal system is imprisoning a Christian pastor as a non-violent political prisoner of conscience, because he cannot obey government and obey God simultaneously.

Last Sunday I paid a visit to a GraceLife Church west of Edmonton, because the church led by Pastor James Coates has been the site of peaceful Christian civil disobedience to the lockdown restrictions on places of worship.

The church itself has been subject to an executive order from the medical officer of health to close, issued because GraceLife does not turn away congregants to meet the government mandated 15 per cent of fire code capacity for places of worship. The church also does not require congregants to wear masks.

Pastor Coates has been fined $1,200 for breaching health regulations. Two Sundays ago, he was arrested by the local RCMP for violating public health orders. On February 14, Pastor Coates, in defiance of the government but in obedience to his God, took to the pulpit again while the RCMP waited outside. Coates gave a sermon on the appropriateness of Christian civil disobedience and the restraints of the relationship between government and church.

However, he was not arrested that day. Pastor Coates was to turn himself in to police on Tuesday.

He did, and he has remained in custody ever since, a political prisoner for practicing his faith in a country that claims to have freedom of religion. It's the kind of thing you would expect to see in Hong Kong, not Edmonton.

Pastor Coates is in the capable hands of his lawyer James Kitchen from the Justice Centre for Constitutional Freedoms. Kitchen will be updating me on Coates' case as it proceeds. According to Kitchen, Pastor Coates cannot in good conscience comply with conditions of release that require him to stop holding services.

For the time that I was at the church, as the only journalist they opened their doors to, it was like the "before times," when people were joyful and their faces were uncovered, when people hugged and shook hands when meeting. It was normal.

GraceLife is an oasis in an abnormal world, and they're fighting against the government to keep it that way.

Spread the Word!
Pastor James Coates
We use cookies to personalise content and ads, to provide social media features and to analyse our traffic. We also share information about your use of our site with our social media, advertising and analytics partners who may combine it with other information that you’ve provided to them or that they’ve collected from your use of their services. You consent to our cookies if you continue to use our website.
×