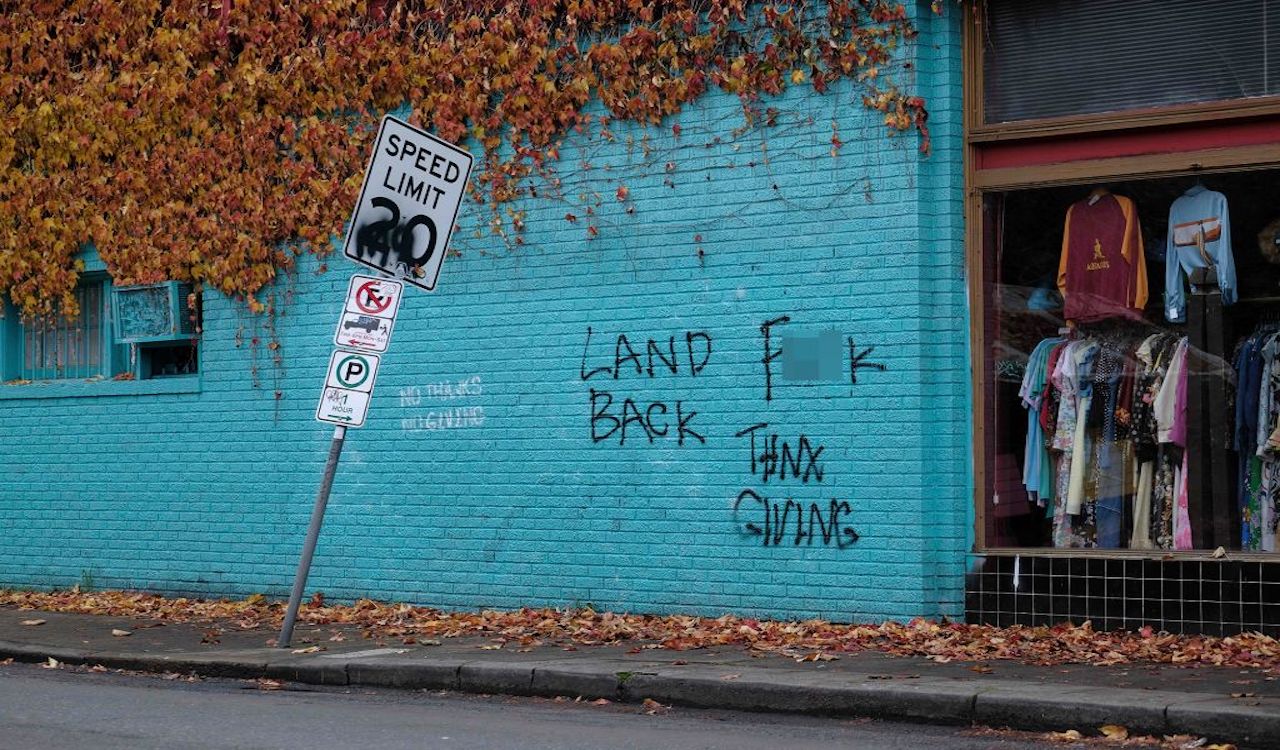 Protests over America’s colonial past erupted on Thanksgiving Day across four cities, which saw several historical monuments and statues vandalized by rioters with the words “land back.”

On Wednesday and Thursday, several statues and buildings were vandalized as part of a targeted effort to vilify America’s past by the so-called “LANDBACK” campaign, an Indigenous movement that claims to fight against capitalism, white supremacy, and colonialism, USA Today reports.

In Chicago, vandals attempted to topple a statue of President William McKinley early Wednesday by using a rope tethered to a car. McKinley was targeted for pushing the westward expansion, which organizers criticized as “racist,” according to WBBM-TV.

Protests also spread to Portland, Oregon— the site of nightly protests following the death of George Floyd in May. Protesters shattered windows and spray graffiti with the words “land back” on several markets early Thursday. The Portland Police Bureau responded to reports and arrested three individuals for criminal mischief.

Also in Portland, a monument at the Lone Fir Cemetery, dedicated to war veterans, was vandalized and its statue toppled and covered with red paint. Photos of the vandalism was shared on social media by an Antifa activist.

Good morning to everyone but colonizers. Especially this one who seems to be having a particularly rough morning down at the war monument in Lone Fir pic.twitter.com/gKIDuZJYtB

In Spokane, Washington, a statue of Abraham Lincoln was vandalized with red paint, according to the Spokane Police Department.

In Minneapolis, two statues—one of George Washington—was toppled and covered in red paint. Another statue read the words “decolonize,” “land back,” and “no more genocide,” according to CBSN Minnesota.

Since Memorial Day this year, cities have opted to remove numerous monuments dedicated to America’s past following widespread protests and vandalism. Although many of the removals were Confederate monuments, several U.S. presidents were also removed, including the Theodore Roosevelt statue at the American Museum of Natural History in New York City.

“The American Museum of Natural History has asked to remove the Theodore Roosevelt statue because it explicitly depicts Black and Indigenous people as subjugated and racially inferior,” said Mayor Bill De Blasio prior to its removal.

The removal of monuments and statues has been fueled by protests that hit many major U.S. cities over racism and police brutality, fueled by far-left activism against capitalism and President Trump.