Police leadership in Louisville is preparing its men and women in uniform to deal with those who riot and looti America’s urban areas ahead of a major announcement in the Breonna Taylor case.

Breonna Taylor has become a focal point for the Black Lives Matter protests that have raged throughout the United States following the death of George Floyd in late May. And now the city of Louisville is bracing for riots in case activists don’t like what they hear.

While Floyd’s name may have faded from memory following the release of bodycam footage and the medical examiner’s report indicating that he died of a drug overdose—and not police brutality, as many claimed—Taylor’s shooting death during a SWAT raid has become a much louder rallying cry for racial justice activists. Sen. Rand Paul even named a police reform bill after her.

In anticipation of upcoming riots, Louisville Police Chief Robert J. Schroeder released a memorandum to all police personnel, declaring a state of emergency for the Louisville Metro Police Department.

“To ensure we have the appropriate level of staffing to provide for public safety services and our policing functions, effective immediately the LMPD will operate under the emergency staffing and reporting guidelines as outlined in the Standard Operating Procedures, Emergency Response Plan, and collective bargaining agreements until further notice,” he wrote. 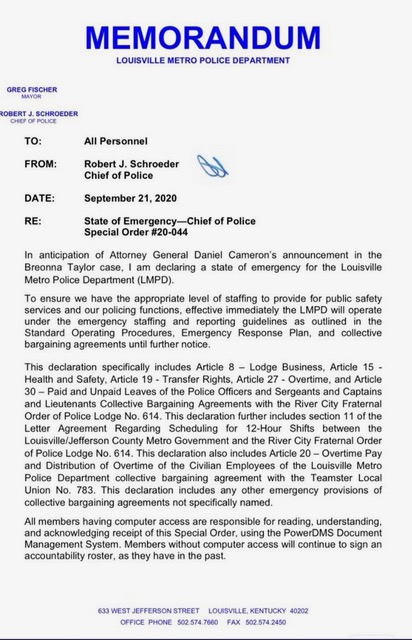