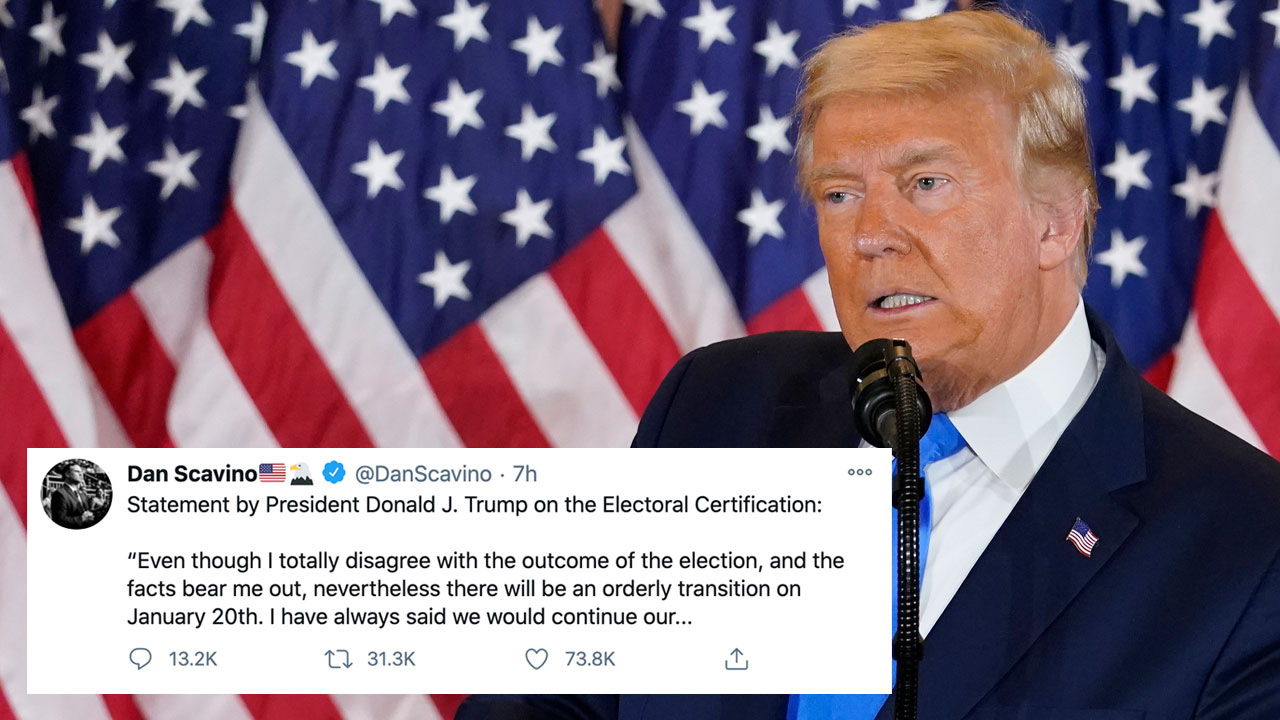 During the early hours of Thursday, following a chaotic day that saw a mob breach the United States Capitol building, President Donald Trump released a statement committing to the peaceful transition of power. This comes after Congress officially certified the results of Democrat Joe Biden's Electoral College victory, confirming him as the formal President-elect of the United States.

The president's statement came after Wednesday's massive protest in Washington spiralled out of control, when the crowd of attendees converged on the Capitol. A number of rally-goers scuffled with police, eventually overwhelming them and forcing their way inside the building.

The National Guard was eventually called in, and security forces regained control of the situation after legislators were evacuated from the building.

“Even though I totally disagree with the outcome of the election, and the facts bear me out, nevertheless there will be an orderly transition on January 20th,” Trump's statement said. “I have always said we would continue our fight to ensure that only legal votes were counted. While this represents the end of the greatest first term in presidential history, it’s only the beginning of our fight to Make America Great Again!”

Statement by President Donald J. Trump on the Electoral Certification:

“Even though I totally disagree with the outcome of the election, and the facts bear me out, nevertheless there will be an orderly transition on January 20th. I have always said we would continue our...

President Trump released the statement through a spokesman after his own Twitter account was suspended for 12 hours for an apparent violation of the social media firm's “Civic Integrity” policy. Facebook and Instagram have since shuttered Trump's accounts “for at least two weeks until the transition of power is complete.”

The certification process was presided over by Vice President Mike Pence late in the evening after it was deemed safe to continue. Pence started the process by condemning the violence before offering praise to the law enforcement who regained control of the situation.

“Today was a dark day in the history of the United States Capitol, but thanks to the swift efforts of U.S. Capitol police, federal, state, and local law enforcement, the violence was quelled,” Pence said.

“The Capitol is secured, and the people’s work continues. We condemn the violence that took place here in the strongest possible terms. We grieve the loss of life in these hallowed halls, as well as the injuries suffered by those who defended our Capitol today. And we will always be grateful for the men and women who stayed at their post to defend this historic place.”