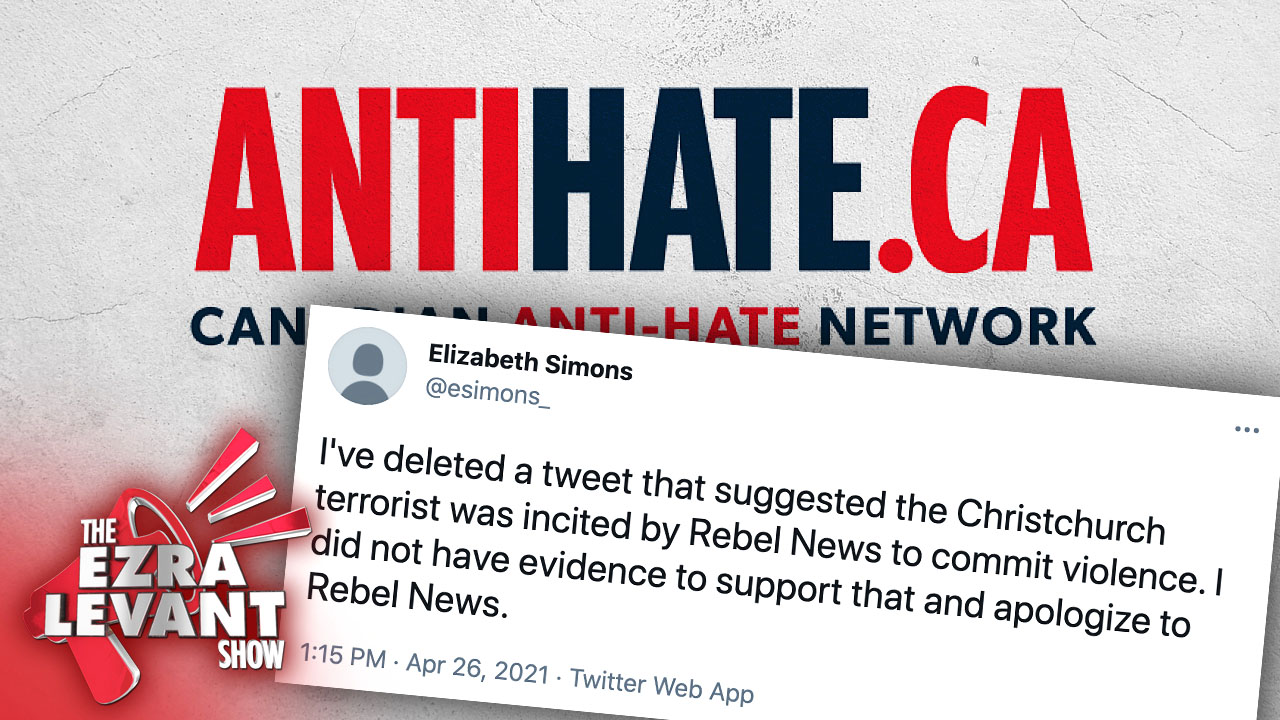 Yesterday I received an apology from someone named Elizabeth Simons. It’s very short.

Let me read it to you:

I've deleted a tweet that suggested the Christchurch terrorist was incited by Rebel News to commit violence. I did not have evidence to support that and apologize to Rebel News.

That apology went up on Twitter yesterday. She had made those disgraceful, defamatory accusations against us back in December, more than four months ago. I’m not going to read her original smear, it was so gross.

And as you can see, even she admits she just made the whole thing up. There’s a word for that: she’s a liar.

I asked her to apologize and correct it months ago. She refused. It was only after I sued her that she grudgingly admitted that she lied about the whole thing. She simply made it up. She didn’t have any evidence, other than her own hate.

What a hateful little woman. And she only gave up that hate when she realized that if she didn't admit she’s a liar now, a judge would probably come to the same conclusion a year from now.

She was holding on to her hatred for me and Rebel News so tightly it was only that fear that made her apologize. Fear and hatred.

And I tell you that, because — you’re not going to believe this — she’s the the deputy director of the Canadian Anti-Hate Network.

I know you think I must be kidding. Someone so full of hatred that she would baselessly accuse someone of being a terrorist.

Someone who hates so deeply she hangs on to a lie for four months — that’s the deputy director of something called the Canadian Anti-Hate Network? Surely that’s got to be an ironic joke?

Well, it’s not a joke, but it’s deliberately deceptive, just like the phrase Antifa — which is short for anti-fascist.

I haven’t read every word on their hate site, but they only seem to accuse Conservatives and Christians of hate (and me too, and I’m Jewish).

Never leftists — including the rising wave of anti-Semitism on the left. And in terms of extremist, they don’t have a lot to say about radical Islam, or even Sikh extremists, or Tamil Tigers. None of that. It’s almost as if they only exist just to smear, you know, Justin Trudeau’s enemies.

And it appears that way. Because they signed a contract to do so.

And I have a copy of that contract right here. For $268,000 dollars. Trudeau’s Heritage Department — that’s the one run by Steven Guilbeault, the convicted criminal, the would-be censor — he gave them a $268,000 grant. Explicitly to smear Trudeau’s enemies.

On tonight's show, I’ll take you through the contract.

Elizabeth Simons, the deputy director who personally profited from this $268,000 grant, knew exactly what her masters wanted from her: they wanted her to lie and smear and defame and discredit. Read the contract! It’s all in there. And so she did. And when faced with the prospect of a trial, she admitted she just lied and made it all up.

But really, that was her job.

If someone at my company had made such a staggering and malicious error, and called someone a terrorist and hid from accountability for months, I really think I’d have to fire them.

But of course, that’s because we don’t call people terrorists unless they’re terrorists. We’re careful with that. But the reason Elizabeth Simons has not in fact been fired from CAHN is that she did nothing wrong — other than she got caught.

You can see the notorious board of the CAHN, including Richard Warman, the censor who turned the Canadian Human Rights Commission into his own personal piggy bank, to prosecute his personal enemies for profit — his misconduct is why Parliament actually removed that censorship power from them. There’s Kurt Phillips, who we at Rebel News exposed as an Antifa supporter. It’s a group of haters. Who started their company with American money and now keep it going with Trudeau’s money. That is: with your money.

Justin Trudeau isn’t against hate. He is a financier of hate.

He isn’t against disinformation. He’s the leading customer of disinformation. And Elizabeth Simons, the confessed liar, still has her job there, with the support of that entire rotten board. And you bet they’ll get their government grant again next year. Not our veterans.

Our veterans are asking for more than Trudeau will give. But confessed liars? Who falsely smear Trudeau’s enemies? Oh, Trudeau has plenty of cash for them.

GUEST: Joel Pollak (@JoelPollak on Twitter) on the secret recording of the Iranian Foreign Minister revealing that John Kerry told him about Israeli strikes in Syria.