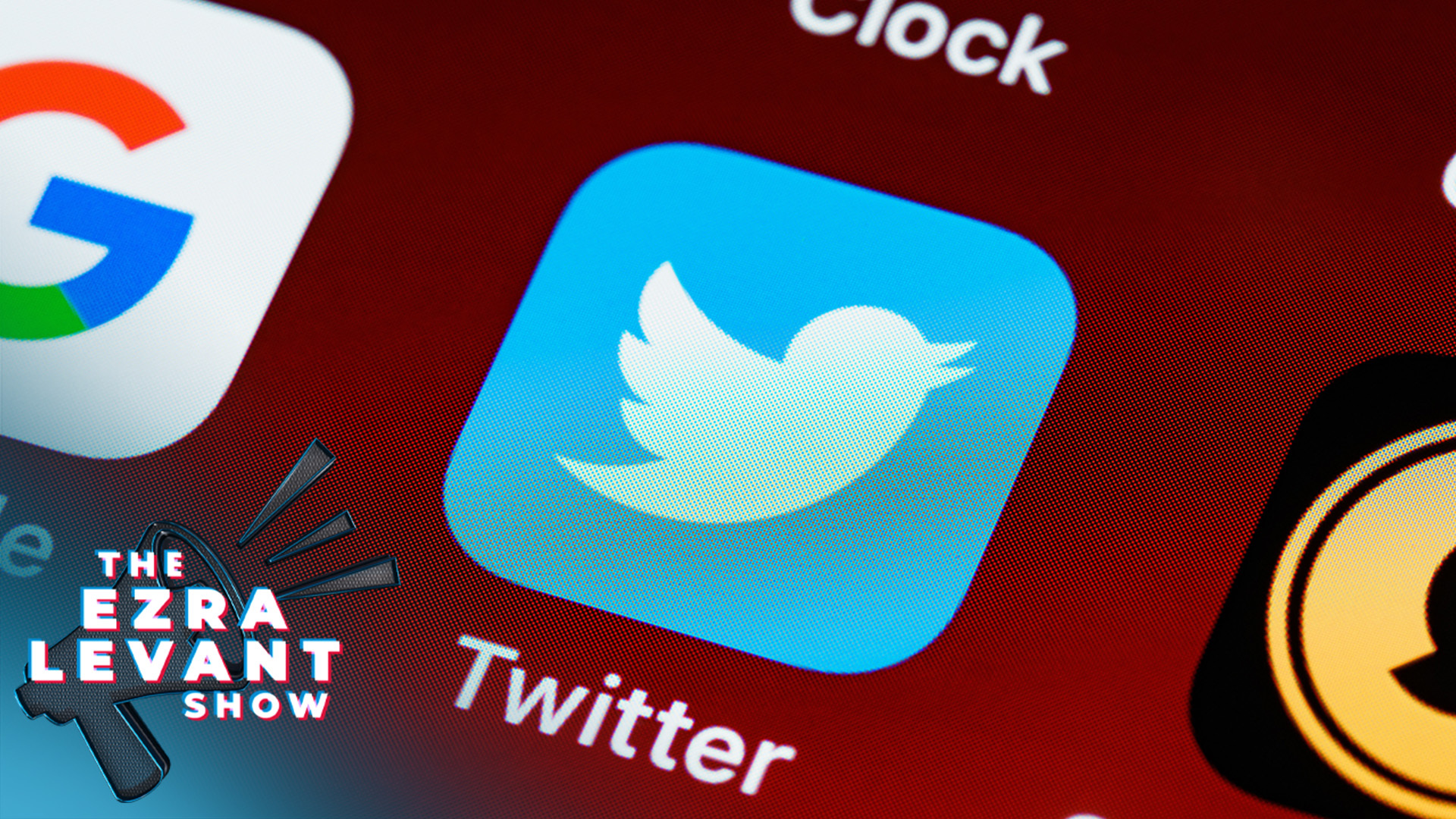 Look at this video from two days ago.

Reporter: "Do you think @elonmusk is a threat to national security?"

Biden: "It's worthy of being looked at." pic.twitter.com/x9AUeqGK3H

That’s a reporter named Jenny Leonard. She works for a news company called Bloomberg, which is course is named after its owner, Mike Bloomberg, the billionaire oligarch who bought his way into being mayor of New York, and then tried to do the same with the presidency in 2020, but he failed.

Watch the video again. I’ve seen enough press conferences to know when a question is set up, planned, orchestrated, choreographed.

So Elon Musk bought Twitter, which is basically the town square for politicians and journalists. https://twitter.com/elonmusk/status/1589639376186724354

And he made a tweet the other day “endorsing” the Republicans. Which was a pretty tepid endorsement, by the way — I don’t think it moved any votes, I think it was just Musk’s ways of signalling that he was different from the rest of the Silicon Valley left-wing mafia. He said: "To independent-minded voters:

"Shared power curbs the worst excesses of both parties, therefore I recommend voting for a Republican Congress, given that the Presidency is Democratic.”

Boy. What a radical. But actually it is radical — other than Peter Thiel, can you name a single Silicon Valley baron who isn’t a Democrat?

That’s Musk’s promise to Twitter users — that it won’t be biased to the left anymore; that it will take a lighter hand at censoring people. That it won’t pander to private interests and hidden hands — I showed you the other day how they had a whole team at Twitter dedicated to making the app compliant with the United Nations’ political agenda. Remember, Twitter is the place that banned a sitting U.S. president because of mean tweets, but lets dictators from China and Iran publish their threats with impunity.

Musk said he wanted to ease up on the politics and the censorship. Well, that can’t be allowed.

Now at the same time, Musk committed a terrible sin in the eyes of the regime — and I mean that in the sense that President Eisenhower did, when he talked about the military industrial complex. Musk said that maybe getting into a proxy war with Russia isn’t quite risk free:

If Russia is faced with the choice of losing Crimea or using battlefield nukes, they will choose the latter.

We’ve already sanctioned/cutoff Russia in every possible way, so what more do they have left to lose?

If we nuke Russia back, they will nuke us and then we have WW3.

Well, how dare you be against nuclear war, sir! You Putin apologist.

By the way, Elon Musk, who runs a satellite Internet company called Starlink, has provided free internet coverage to Ukraine to keep their Internet working despite the disruption of their infrastructure by the Russian invasion. And that’s a donation — unlike arms manufacturers who are charging for their weapons sales. I’d call Elon Musk what he appears to be: a chatty public intellectual who likes to brainstorm in public. He’s not an enemy, he’s actually quite charitable, it seems. And he believes in freedom in an old-fashioned way, even though he’s in industries that don’t.

Well, that must be stopped. You can’t let Twitter, the marketplace of ideas in the modern age, become uncensored and free! Imagine if he lets Trump back on the platform! And you can’t have people questioning the war in Ukraine — even though Musk is quite possibly the most generous person in the world in terms of his outright donations to the Ukrainian cause. Can’t have that. Thus, the choreographed question about investigating him as a foreign spy.

And that question: Musk is a threat to national security, including due to his connection with the Saudis.

And fair enough! Here’s a news story about the Saudis investing in Twitter:

"Saudi Prince Alwaleed Bin Talal has added Twitter to his long list of investments, putting $300 million into the social media company. The billionaire investor announced the move in a statement, saying the investment followed months of negotiation and due diligence.

“Our investment in Twitter reaffirms our ability in identifying suitable opportunities to invest in promising, high-growth businesses with a global impact,” Alwaleed said in a statement. It did not indicate the size of the Prince’s ownership stake in Twitter or the implied value of Twitter given the new investment.”

Definitely worth an investigation. Except can I point out the date of that article? Dec 19, 2011. Saudi Arabia has been one of the biggest owners of Twitter for more than a decade. In fact, when Elon Musk first made his bid for Twitter, the Saudis didn’t want him. Here’s what Prince Al Waleed said:

I don't believe that the proposed offer by @elonmusk ($54.20) comes close to the intrinsic value of @Twitter given its growth prospects.

Being one of the largest & long-term shareholders of Twitter, @Kingdom_KHC & I reject this offer.https://t.co/Jty05oJUTk pic.twitter.com/XpNHUAL6UX

And you can see the image appended to that tweet, showing that the Saudis had actually upped their stake in Twitter. And by the way, the Saudis used Twitter to spy on its users. Here’s a story in the Guardian just a few months ago.

So for a decade the Saudis have owned a large chunk of Twitter, and have used it to spy on users. But no problem — Twitter took out the real enemies, like Donald Trump.

But now that Musk wants free speech and endorses the Republicans, he’s a national security risk, especially for his links to Saudi Arabia. And Joe Biden says it’s worth the government looking into.

And that Bloomberg reporter, eh? What a question. She never thought to ask it about Saudi Arabia before. Or, for that matter TikTok, which is run by China as spyware on millions of westerners. Or Huawei, the Chinese telecom giant. None of that concerns Bloomberg — or Joe Biden.

Hey, I wonder if that has anything to do with the Biden family’s financial dealing with China? Hunter Biden, who has no discernible skill or experience, landed huge business deals in China. And Ukraine. And Russia. His laptop, which has been verified as accurate by the mainstream media, talks about giving 10% “to the big guy”. Gee, I wonder who that could be.

The whole world knows that Hunter Biden is for sale. Here’s the BBC. You don’t think every Chinese or Ukrainian or Russian oligarch knows the entry point into the U.S. administration? For all the allegations of Donald Trump or his family somehow benefiting financially from his presidency, there was nothing like this.

Which perhaps explains why Chinese companies like TikTok are not subject to investigations, but Elon Musk’s Twitter is. Seriously, just today, the White House confirmed it:

The Biden admin looks to be going ahead with an investigation into @elonmusk over national security. Really lame. pic.twitter.com/oEwjh4upMY

CFIUS stands for the Committee on Foreign Investment in the United States — it reviews national security threats emanating from business deals. It hasn’t investigated Hunter Biden. But Hunter Biden is a good Democrat, so why would they?

But who was that reporter who asked the set-up question? Like I say, she worked for an oligarch named Mike Bloomberg. He has some interesting views on China, where he has made huge investments. Take a listen to this. I’m going to play a full clip. This is incredible.

“Xi Jinping is not a dictator” — Michael Bloomberg. pic.twitter.com/FGFy1RBZC4

So Xi Jinping the dictator of China is not actually a dictator! And again and again he said that. It isn’t a gaffe; it wasn’t a 'mis-speak'. He’s adamant about it. I mean, he wants more money — he doesn’t have enough. And he’ll say that Xi Jinping is a great democrat, a great man of the people. Huge shout out to that reporter, Margaret Hoover, by the way, for pressing him on it.

Why is this relevant to us here in Canada?

Because most things in America are relevant to us. Because Twitter and Facebook and the rest of Big Tech dominates Canada just as much as it dominates the U.S. And because Justin Trudeau is doing the same thing — accusing his political opponents of being in league with foreign enemies. They’ve even accused us here at Rebel News of being Russian spies.

What a laugh — I remember when the media and the Democrats said that Donald Trump was the fascist bully who was threatening free speech. No — that was just them projecting. It’s Biden who is taking on all the trappings of a fascist leader. And don’t think Trudeau won’t either — as his invocation of martial law proved.