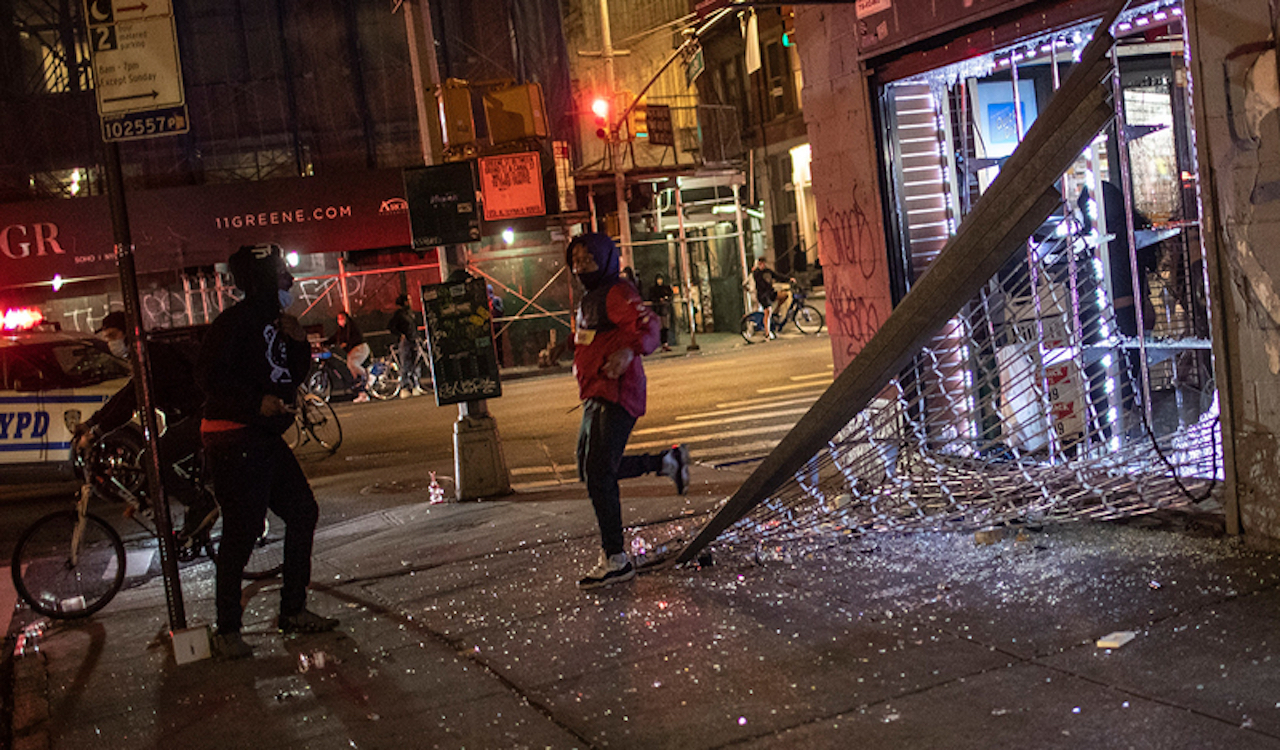 Black-clad Antifa militants flooded Brooklyn streets in New York City in a violent night of rioting on Tuesday following the shooting death of an armed black man in Philadelphia.

On Monday, police shot and killed Walter Wallace Jr., an African American man who was armed with a knife. His death, footage of which went viral on social media, caused the city of Philadelphia to erupt in violence.

New York Post reports that around 200 of the protesters met in Brooklyn’s Fort Greene Park before fanning out through city streets, vandalizing police vehicles, setting fires, and assaulting police officers. One Antifa rioter set fire to an American flag and dragged it across the road.

“Burn the precinct to the ground, every city, every town!” chanted the demonstrators.

Sources told New York Post that rioters, several of whom were armed with bats, threw projectiles at police officers.

Members of the mob vandalized a number of businesses in the area, including a Bank of America, an Investors Bank, and an Urban Outfitters outlet on Atlantic Avenue, where Antifa rioters spraypainted communist symbols and “ACAB” (All Cops are Bastards).

Protesters took to the streets of Brooklyn earlier tonite for #WalterWallace. Lots of NYPD & corporate property was redecorated & adorned with radical artwork. Big banks had an especially eventful night. pic.twitter.com/Z1NdZc7v3c

This Investors Bank got redecorated last nite too as protesters took over the streets of Brooklyn to demand justice for #WalterWallace & the abolition of police. pic.twitter.com/jSKrd1qWVm

As police attempted to quell the unrest on Atlantic Avenue, some members of the mob resisted, provoking a violent confrontation that led to 30 arrests. At the same intersection, the driver of a car who was stopped by police accelerated his vehicle, smashing through the police line. The Post reports that one officer suffered a leg injury as a result of the collision.

It is unclear if police later arrested the driver, whose windows were shattered by police who attempted to stop the vehicle from accelerating. Footage of the violence was captured and shared on social media.

As cops attempted to stop a car during a protest in NYC, they broke the windows and the car drove through the line of bike cops. We are unaware if there were any injuries. pic.twitter.com/0DPKPclJOm