We petition Jonathan Levy to stand up to bullies on social media, and withdraw his unfair condemnation of the CHAT students and faculty who met with Dr. Sebastian Gorka at the AIPAC conference.

We petition Jonathan Levy to stand up to bullies on social media, and withdraw his unfair condemnation of the CHAT students and faculty who met with Dr. Sebastian Gorka at the AIPAC conference.

April 12, 2019 - Ezra delivers the petition to CHAT, the Toronto Jewish school that reprimanded students and faculty for attending a (previously approved) talk about pro-Israel activism, by Dr. Sebastian Gorka — simply because a handful of Twitter trolls complained.

April 5, 2019 - Ezra speaks with a CHAT alumnus Noah Alter who launched his own open letter for CHAT alumnus to defend Aviva and Dr. Gorka against the odd allegations from his school.

It should have been the trip of a lifetime for fourteen students from the Community Hebrew Academy of Toronto (known as CHAT).

They were on a field trip to Washington, D.C., for a big pro-Israel conference called AIPAC.

One of the highlights of the trip was a personal meeting with Dr. Sebastian Gorka, a former deputy assistant to President Donald Trump, now a prominent political commentator. The students (and their teacher Aviva Polonsky, and vice principal Rabbi Gemara) had one hour with Dr. Gorka, and left inspired. Aviva even tweeted a “selfie” with Dr. Gorka. 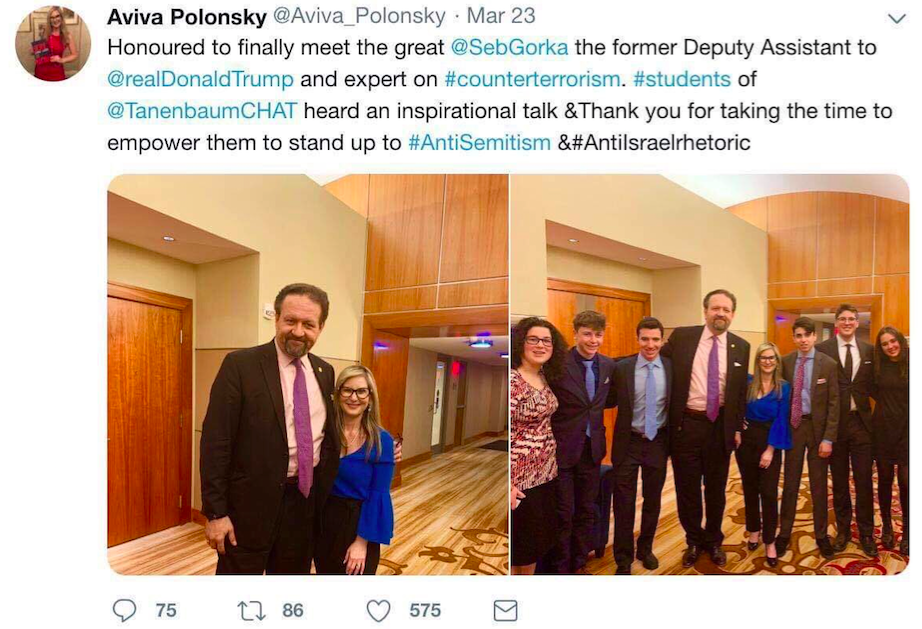 But then all hell broke loose.

A few dozen anti-Trump maniacs on Twitter claimed that Dr. Gorka was actually an anti-Semite — an absurd accusation, given that he was at a pro-Israel conference giving a pro-Israel lecture to Jewish students.

But the school’s administration panicked. They caved to the bullies. And you won’t believe what they did next.

They threw their teacher — and their great students — to the wolves. The school said that Dr. Gorka was offensive and controversial.

But that’s just not true. We know this, because we have a full recording of the talk. You can listen to it below, and you can read the entire transcript, here.

And more than that, the visit with Dr. Gorka was approved in advance by school administrators. And a vice principal attended it — and said he loved it!

So why did Jonathan Levy, the head of school for CHAT, tell anti-Trump activists that he had no idea what his students and staff had done? Why did he pressure the teacher, Aviva, to delete her innocuous tweet?

Because he caved to bullies, that’s why. But it’s just not right.

So we’re starting a petition. A few dozen anti-Trump CHAT alumni managed to push over CHAT’s head of school. So let’s get 10,000 fair-minded people to push back.

This isn’t just a petition for Jews. It’s for everyone who hates to see a bureaucrat punish students and staff for doing nothing wrong — just because online bullies pressure them.

And it’s for anyone who thinks it’s outrageous that a righteous Gentile like Dr. Gorka is smeared as anti-Semitic, when in fact he’s a great friend to Israel and the Jewish people.

Please stand with Aviva, and support Dr. Gorka by signing the petition below.

Spread the Word!
Toronto Israel
We use cookies to personalise content and ads, to provide social media features and to analyse our traffic. We also share information about your use of our site with our social media, advertising and analytics partners who may combine it with other information that you’ve provided to them or that they’ve collected from your use of their services. You consent to our cookies if you continue to use our website.
×