The urban hub is on its second weekend of huge demonstrations for the Freedom Convoy, this time attracting counter-protesters and some unsubstantiated rumours in the press. 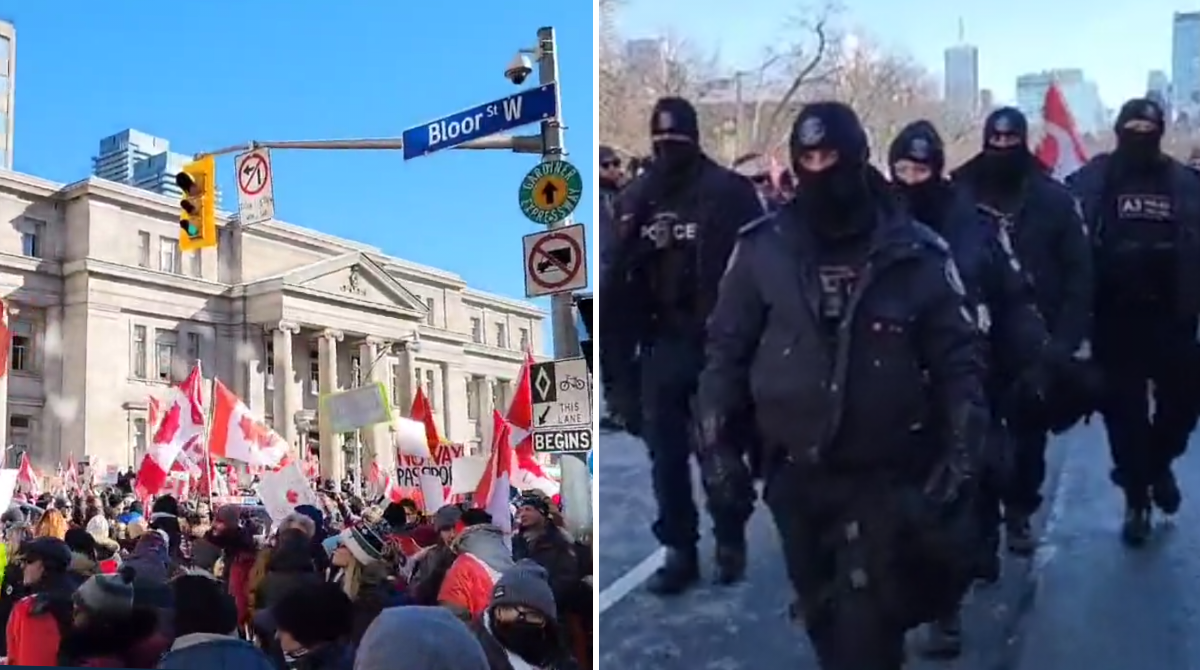 As the Freedom Convoy moves loudly into its second week, cities across Canada are once again seeing large protests and demonstrations in support of the convoy.

Toronto is one of these places, with massive events and also a strong city and police response.

Our Rebels Tamara Ugolini, Efron Monsanto and “Mr. Producer” AD are on the scene this weekend covering the events.

After Ottawa released a warning this week about a heavy police presence and potential army involvement at any upcoming protests, Toronto Mayor John Tory also announced plans to prepare for a weekend of demonstrations.

I joined Chief @jamesramertps and Staff Superintendent Pogue to provide an update on the @TorontoPolice’s operational plans for this weekend.

Tamara Ugolini reported this morning that Toronto police had indeed taken some extra measures, including blockading every vehicular access point to the protest area in Queen’s Park.

.@realmonsanto & I are here at Queen’s Park in Toronto reporting on the #FreedomConvoy2022 for @RebelNewsOnline@TPSOperations have blockaded every vehicular access point to prevent a blockade of every access point

After claims (which Rebel News has yet to substantiate) that protesters were harassing health-care workers at previous protests this week, the City of Toronto also took extra measures to prevent protesters from blocking or impeding access to hospitals, and there was even a small counter-protest made up of health-care workers outside of one hospital.

Good morning! Here's our front page for Feb. 5, 2022, on Toronto Police vowing 'strict enforcement' to protect hospitals and emergency services ahead of the planned 'Convoy for Freedom' in downtown Toronto. https://t.co/xIm6wHyPKM pic.twitter.com/Adi5n6o6RY

Getting ready for the #truckersconvoy, Toronto police have blocked University Ave as far south as Dundas to prevent trucks blaring horns from getting too close to hospitals. #onpoli pic.twitter.com/OuCaeUph87

There is a large protest right in front of a Toronto hospital. But it’s the counter protesters, made up of healthcare workers and supporters pic.twitter.com/BvHACclR5g

At around noon, tensions heightened with protesters on foot trying to get through to Queen’s Park, which was being blocked by police.

Tensions grow in Toronto at the #FreedomConvoy2022 https://t.co/eHwQe3dc5g

Some tension here as big haul trucks advance. People cheer "let them through" as police barricades block the path to Queen’s Park pic.twitter.com/YJSEciz1Rc

However this didn’t dampen the spirits of the freedom protesters — what better way to beat the tension than with some music, especially reggae? In an unexpected response, the crowd broke out into a dance to Bob Marley!

Tense situation between the #ConvoyForFreedom and Toronto police. People break out in a dance to Bob Marley.

There was one protest-related arrest reported by Toronto police at around 1:15 p.m. This was a 22-year-old man, arrested for assault with a weapon, administering a noxious substance (smoke bomb) and public mischief.

However, according to T Lee Humphrey, founder of Veterans for the Conservative Party of Canada, the police conveniently forgot to mention that the young man was actually attacking the convoy protesters by throwing a smoke grenade in the middle of a group of supporters! Rebel News is awaiting confirmation on this information.

Funny they don’t mention he was attacking the convoy protesters by throwing a smoke grenade in the middle of a group of convoy protest supporters! #yyz #TruckersConvoy2022 https://t.co/yJXKdWwyw6

The sounds of honking continue to be heard across the city, despite any efforts by police, counter-protesters or angry citizens to thwart the spirit of the protesters.

Here’s the fringe minority honking for freedom in Toronto https://t.co/jUMARsiCfa

Toronto people must really like their music and movement — there was even a friendly mosh pit at Bloor St. at one point mid-afternoon!

Heavy policing throughout the peaceful #TruckersConvoy2022.

That’s all for now — at least, at this location!

Please follow us at www.ConvoyReports.com to follow our breaking updates and to support our journalists. Unlike the legacy media, Rebel News doesn’t take a dime of taxpayer funding. We rely on generous donations from people like yourself! If you’d like to be a part of helping us bring you and the world the other side of the story during these groundbreaking protests, please consider a financial donation, or just help us out by sharing our content. Thank you SO MUCH to all of you who have supported us so far!