Single, unjabbed and ready to mingle? Yes, there's an app for that 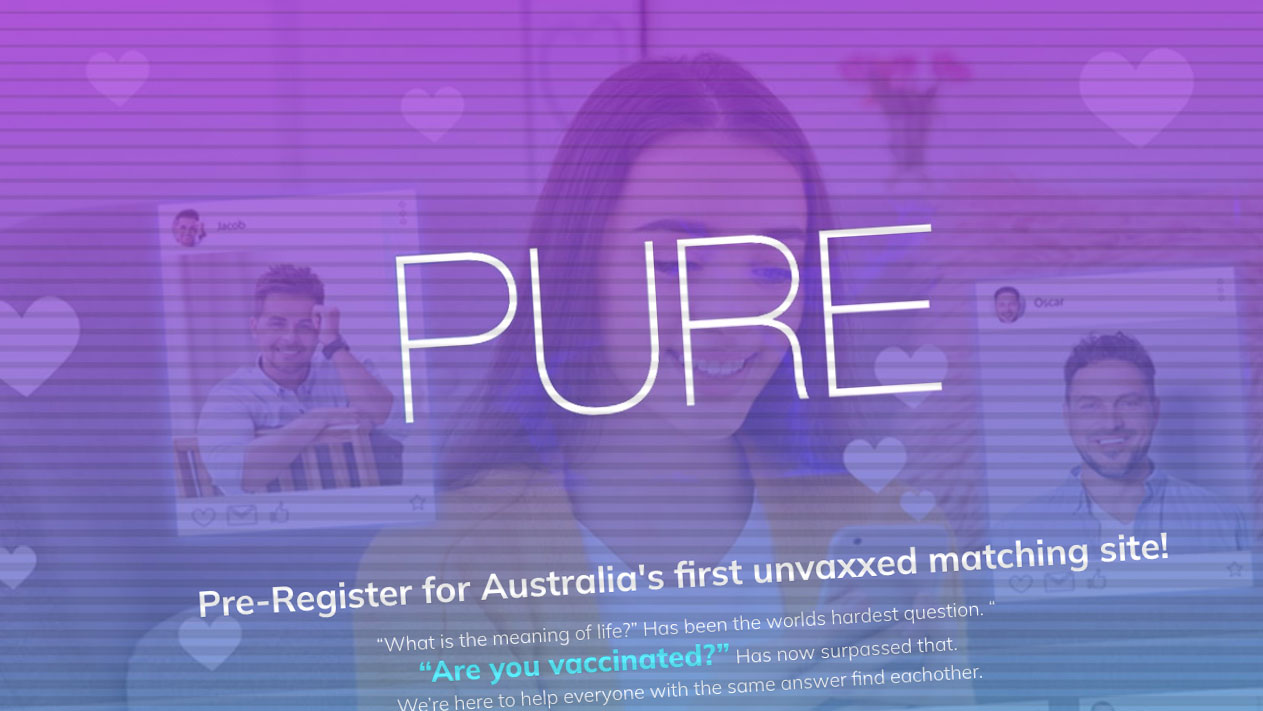 Unvaccinated singles can pre-register for a new (and almost certainly satirical) dating app.

Ads have been appearing for ‘Pure Match’ – an app that claims to be a dating service exclusively for unvaccinated Australians looking to hook up with like-minded people.

‘Vaccination status’ has become a form of virtue-signalling online where users on various platforms use images of needles in their profile names to identify themselves. Given the heavy politicisation of the topic and clear tribalism forming inside social groups, a dedicated dating app was an inevitability – even if this one turns out to be a trolling exercise.

Other vaccine-oriented dating apps have appeared, but they are routinely taken off the app store.

“We’re working hard to bring you the purest platform that we know you will love, stay tuned and stay strong,” said one message on the Pure Match site.

It appears that ‘Pure Match’ is a play on the ‘pure blood’ terminology that has emerged in a fringe part of the unvaccinated social media discussion, lending weight to the assumption that it is simply a joke.

However, the question about dating and vaccination status is not a joke to some health professionals who have advised against dating unvaccinated people – essentially excluding them from romantic relationships.

“Is it fair for me to insist that they [my potential partners] get vaccinated before we date?” asked a reader in PerthNow.

Sexologist and relationship coach Amanda Lambros quoted the Mayo Clinic and the United Nations health advice before coming to the conclusion that ‘it might not be worth it’.

“You need to decide whether the position to remain unvaccinated is a deal-breaker for you in the long run and how that decision might ultimately impact on your relationships (for example the ability to travel together),” said Lambros.

“If having a relationship with an unvaccinated person worries you enough, then it might not be worth it.”

Meanwhile, a YouGov poll in the UK revealed that 28% of adults would not date an unvaccinated person. This survey came about after the UK government joined forces with popular dating apps as part of a ‘jab drive’ to saturate the dating scene with vaccine obsession.

Dating apps added ‘vaccination badges’ and stickers to profiles in return for in-site benefits. Other apps encouraged users to display their views on mask-wearing and social distancing.

As part of the study, one user was quoted saying, “I think the new features are a good idea because they help you find like-minded people. There are still a lot of anti-vaxxers out there.”

A lonely member of the UK Government’s Scientific Advisory Group of Emergencies warned that it might not be such a great idea for the government to set up campaigns to deliberately divide young people in their social groups. Professor Susan Michie was right to worry, with society now full of people who refuse to date (or even speak to) people according to their vaccination status.

So, while the internet can laugh at the ‘Pure Match’ dating app idea, it seems that the dating app community at large is already discriminating against the unvaccinated.

Are we still laughing knowing governments around the world are launching campaigns to exclude people from normal human social interactions?