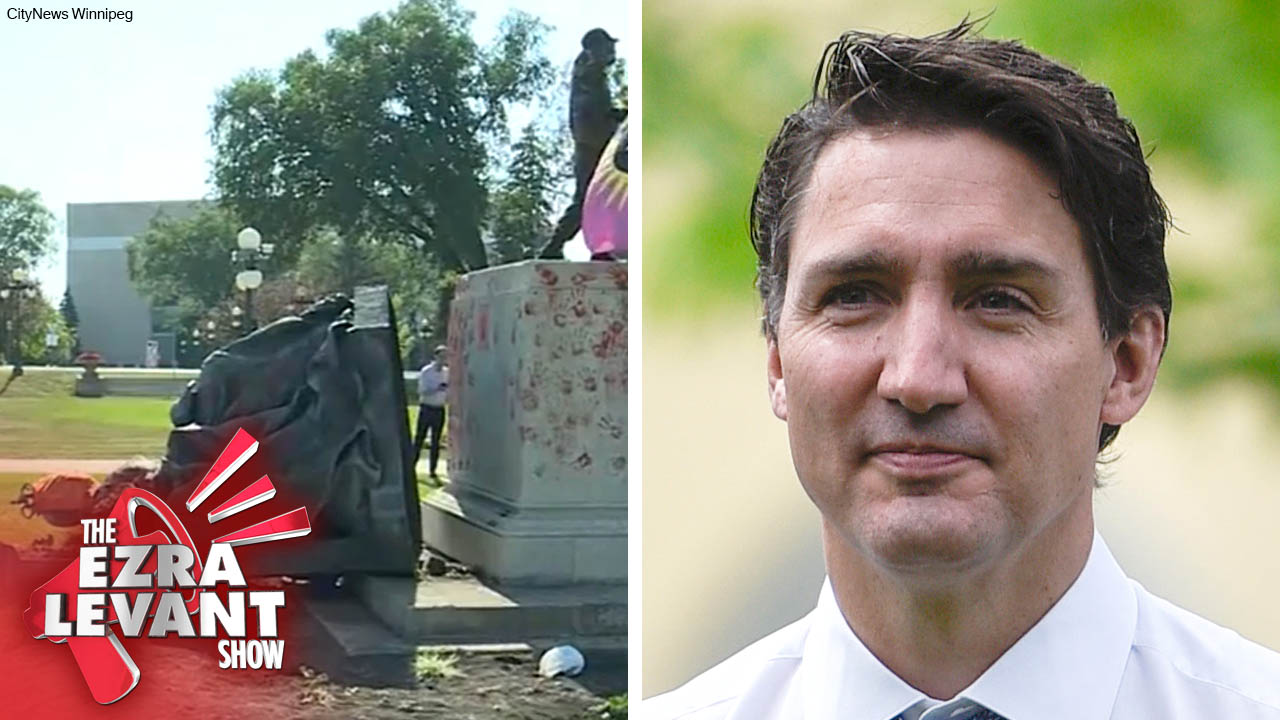 What a terrible day it was yesterday. On purpose of course.

That’s a massive mob, highly organized, with matching outfits, coming with ropes and tools, in broad daylight, not the dead of night, in the full sight of a huge police force, just tying ropes to a statue of Queen Victoria, right on the steps of the Manitoba Legislature, and just pulling it down.

That is a crime, of course.

And police did nothing but watch. Actually, that’s not quite true.

Yeah, that’s quite a headline. Because it wasn’t a statue vandal who was arrested.

It was the lone counter-protester who was against it. He wasn’t just arrested — it sounds like they Tasered him, too.

This is the same Manitoba police who arrested and jailed Maxime Bernier, the leader of the PPC party, for meeting peacefully with other skeptics of Manitoba’s lockdown?

And yesterday alone, ten churches vandalized in Calgary. Ten in one day. Don’t tell me this isn’t an orchestrated, financed, national operation.

Here’s what Calgary’s police had to say:

Officers are investigating vandalism at 10 churches.

We must never forget residential schools are a part of our legacy that destroyed the lives of so many Indigenous families. But vandalism like this only creates further division, fear and destruction.https://t.co/ufMGOlJ4X6

Not sympathy or solidarity with the vandalized churches or their congregants. Just a statement that they were vandalized.

But really, Trudeau's response was no different.

But yesterday, Canada Day, was the focus. They’re trying to turn Canada Day into a day of shame and rage.

Justin Trudeau needs a bit of that division up here. He needs a crisis to distract from his own controversies.

He doesn’t want the election to be about him and his incompetence, his cabinet fiascos, his disgraced ministers from Harjit Sajjan to Steven Guilbeault to the nearly 1,000 days China has held Canadian hostages.

Much rather to have a summer of hate, that will feed the media, distract from his own errors, but most importantly, get to his master strategy of dividing us based on sex and race and posing as the great reconciler, while accusing his opponents of being racist and sexist.

Trudeau won’t stand up for Canada — not against China; not against rioters and arsonists.

He won’t even stand up for the Queen.

Why would he? His own father mocked the queen, doing a foolish twirl right behind her back when she was repatriating the Constitution. He hated her.

Trudeau junior hates her too, hates the Catholic Church too.

He’s not going to defend them. He loves what’s happening.

Would you expect anything else from someone who idolizes Fidel Castro or Communist China?

Canada Day? If Trudeau is reelected this summer, and Erin O’Toole will ensure he is, don’t expect the holiday to survive a third Trudeau term.

GUEST: David Menzies on his recent story about a protest at a Kitchener prison demanding to change a policy allowing biological men in women’s prisons.