Why is Trudeau re-restricting handguns that have already been restricted? I have two theories 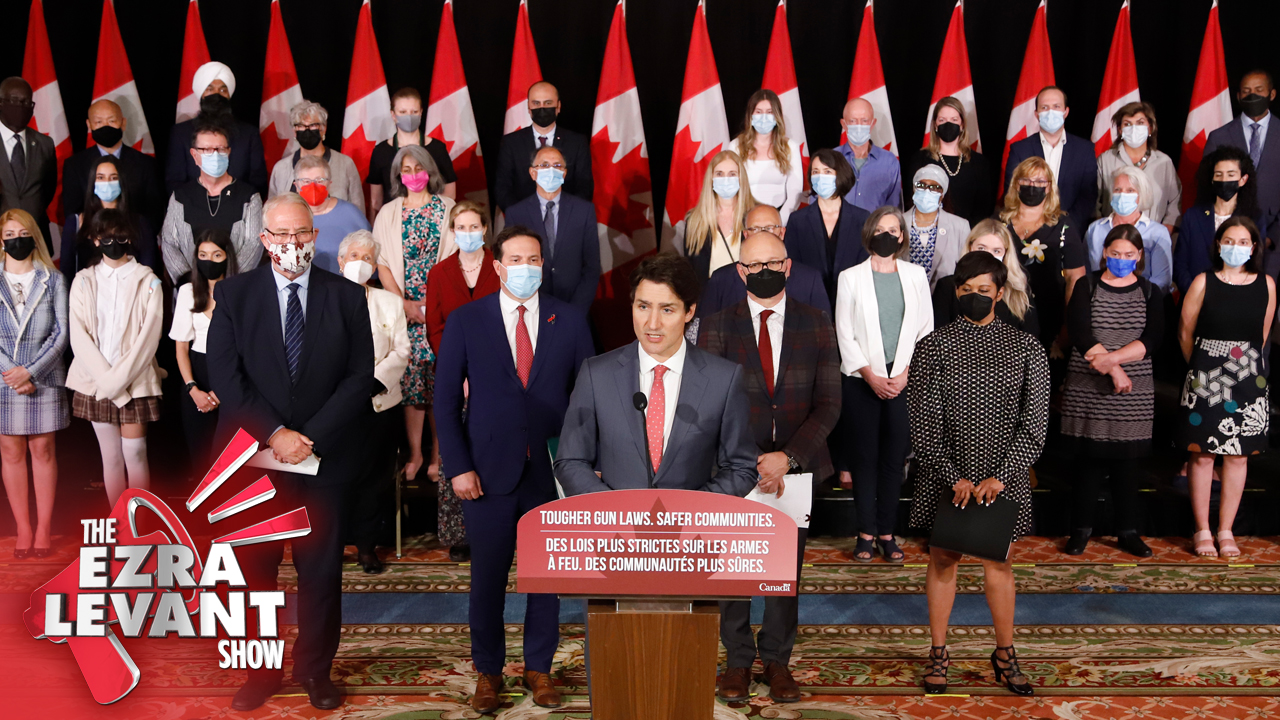 There was a mass shooting in Uvalde, Texas last week. Our reporter Juan Mendoza Diaz covered it.

A terrible, horrific story. A mass murderer, yes. But shockingly, police refused to go in. They waited outside. They didn’t go in — they literally said they were worried about being shot.

Yeah, that’s like a fireman who won’t go into a house because it’s on fire. Pretty much defeats the purpose of a fireman.

But that tragedy and horrific crime is political gold for leftists. They don’t really care about kids, sorry.

So Joe Biden is looking to capitalize on this, of course. He’s an American; gun control is a big issue there; their Second Amendment lets Americans have guns, and many do, and the summer of riots by the Democrats street gangs. Many Americans protect themselves.

Not so much in Canada. And there are pluses and minuses to that. But we already have very strict gun control. It’s almost impossible to buy a handgun in Canada — they’ve been heavily regulated since 1934.

Trudeau already announced that he intends to ban up to 1,500 different “kinds” of rifles — I don’t really think there are 1,500 kinds of rifles, Trudeau was just trying to impress uneducated journalists. I don’t think there’s a definition of an “assault rifle” — what does it mean? Something scary? Something black?

But again, Trudeau is largely re-announcing what he’s announced before. Not being able to sell or transfer a handgun is a violation of property rights of course. But again, it’s kind of a media trick — today you can’t just sell or give your handgun to anyone. They have to be licensed, too.

I’m not saying there is nothing new here; and I’m barely more educated than a “regular” journalist who knows literally nothing about guns. I’m just saying, a lot of Trudeau is just photo ops and puffery.

Here’s what he said:

Here is Trudeau announcing major restrictions on handguns. Why?Canada does not have the same problems with gun ownership!

Look at the nodding muzzled morons in the background…..

This is NWO in action. And Canadians will silently agree as their rights are removed. pic.twitter.com/B02QbnnZ60

I mean, do you really think he’d increase criminal penalties for anything — other than being a trucker who peacefully protests against him?

Well, he says he’ll increase penalties. But he’s a bit of a liar. Because there’s a bill in Parliament, right now, where he says he’ll do the opposite.

So, Stephen Harper brought in mandatory minimum sentences for many serious crimes, including gun crimes. Trudeau is keeping just a few of those — for murder, or using guns in a gang. But for everything else, he’s literally reducing prison sentences. He’s reducing them.

So you have been turned into a criminal, because Trudeau changed something on a piece of paper. You’ve been lawful your whole life; Trudeau said a piece of property you have is now banned; you might have even forgotten about it; but now you’re a gun criminal.

So real gun criminals can go free faster. Farmers and ranchers have now been criminalized. All because Trudeau saw some news in Uvalde that he knew he could exploit.

You know there’s a pattern here. I tweeted about it yesterday.

He really is like his hero Fidel Castro, isn't he? https://t.co/bcyWZr0LEA

I mean, one or two of these, that’s just bad public policy. But you look at it all — there’s a theme to it. None of this is wanted by Canadians. None of this shows up in the polls. Canadians are worried about inflation the price of gas, the price of homes, crime, the economy, millions of us are still second class citizens, our civil liberties flattened because we’re unvaccinated. And this is what Trudeau focuses on?

I really think Canada is becoming less free. Trudeau really meant it when he said he admires China — not for its culture or language or history, but for its violent dictatorship.

GUEST: Marc Morano (@ClimateDepot) joins to talk about his recent piece in the American Spectator about Navy Secretary Carlos Del Toro's take on climate change as an existential threat.