According to police, the march set foot in the neighbourhood around 1:15 p.m., where demonstrators soon tied ropes around the statue, pulling it down, before covering it in red paint. 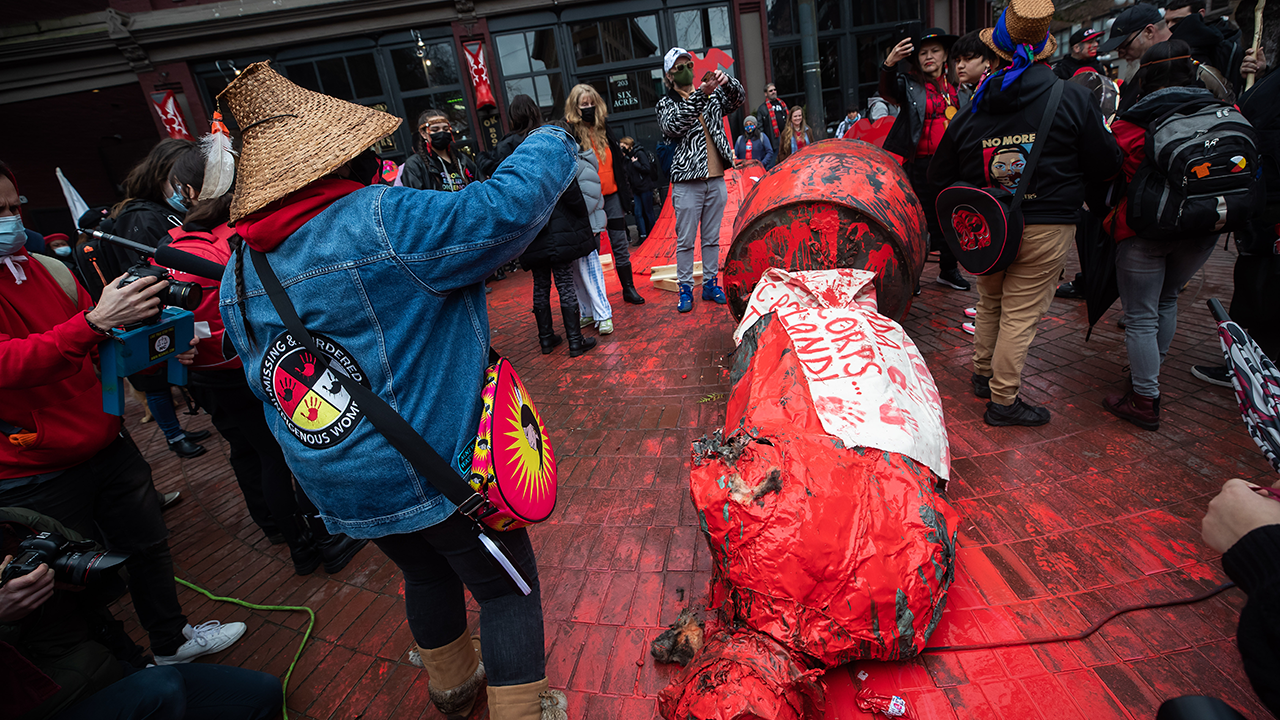 Amid days of complaints about Freedom Convoy protesters allegedly disrespecting statues and memorials in Ottawa and their failure to abide by the rule of law, left-wing activists pulled down a controversial statue of 19th-century bar owner John Deighton, also known as “Gassy Jack”, in a vigilante action on Monday.

CBC reports that the statue, located in Vancouver’s central Gastown neighbourhood, was pulled down by scores of protesters during the 31st annual Women’s Memorial March.

According to police, the march set foot in the neighbourhood around 1:15 p.m., where demonstrators soon tied ropes around the statue, pulling it down, before covering it in red paint.

Deighton, known as Gassy Jack, was a British-born bar owner who owned a popular saloon in the late 1860s.

The statue was erected some time in the early 1970s and given to the city as a Valentine’s Day gift.

Despite his popularity, the commonly told story about Deighton often neglects to mention that he was married to a young Squamish woman, and later her 12-year-old niece.

Deighton’s first wife, whose name is lost to history, died, at which point he married her niece Wha-halia, also known as Madeline. Deighton was 40-years-old when he married his child bride. The girl, who was 28 years his junior, escaped from Deighton when she was 15.

While many are supportive of the move to tear down the statue, Vancouver Mayor Kennedy Stewart said the city has been consulting with the Squamish Nation on how to remove the statue and acknowledge its subject's harmful legacy.

A spokesperson from the Squamish Nation said on social media that the discussions had arrived at the conclusion that the statue would be removed with both sides in agreement.

“The discussions were ongoing, focused on a culturally safe and respectful process that would bring dignity and healing to all involved,” said nation spokesperson Wilson Williams (Sxwíxwtn).

“The Nation was in consultation with our community and the descendants of our respected ancestor Madeline — Gassy Jack's former wife. She was a courageous woman our Nation looks up to, and today has many descendants alive in our community.”

Video of the statue’s toppling was shared on social media by journalist Chantelle Bellrichard, showing an elderly woman almost getting hit by the statue as it falls to the ground.

In a statement to the press, the mayor was not supportive of the actions taken by demonstrators to pull down the statue.

“While the statue was clearly a symbol of pain, violence and trauma associated with colonialism and violence against Indigenous women and girls, today's actions that removed it in a dangerous way undermines the ongoing work with the Squamish Nation to guide the steps towards reconciliation,” the mayor stated.