The message, written in green paint, reads: “THE REAL HEROES ARE THE VACCINATED!” 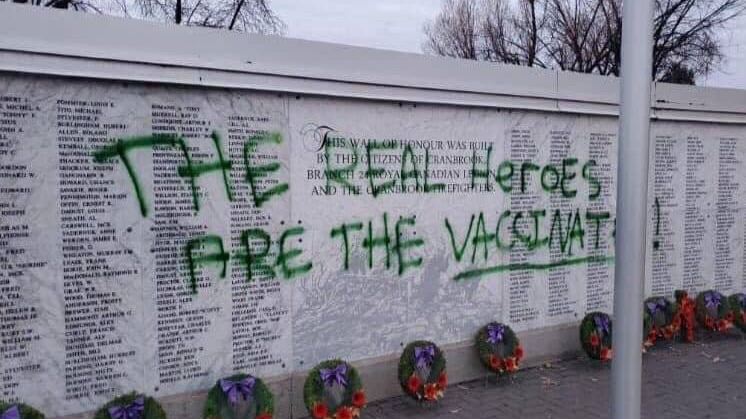 The Wall of Honour at the cenotaph in Cranbrook, British Columbia was defaced with pro-vaccine graffiti early Thursday morning, prior to the town's Remembrance Day ceremony.

The monument stands as a tribute to Cranbrook-area veterans who served in the various conflicts Canada has fought in, including the Boer War, First World War, Second World War, Korean War, Vietnam War and peacekeeping missions.

RCMP were called to the site at around 7 a.m., when a passerby noticed the graffiti sprayed across the memorial.

The message, written in green paint, reads: “THE REAL HEROES ARE THE VACCINATED!”

The Wall of Honour at the cenotaph in Cranbrook, B.C. that stands as a tribute to Cranbrook-area veterans.

This was Remembrance Day morning.

Whether this was from a pro-vax fanatic, or someone trying to make the pro-vax crowd look bad— it's truly abhorrent behaviour. pic.twitter.com/QdteG4Oxj8

“Thankfully, the Cranbrook RCMP, Cranbrook Fire Services and City of Cranbrook staff worked together and were able to quickly remove the writings before any of our war heroes and veterans were able to see what had been written”, said Cst. Katie Forgeron. “We are continuing to investigate and are looking for any information leading to the person(s) responsible”.

The City of Cranbrook also released a statement on its Facebook page:

"As a community, we are beyond disappointed by the disrespectful actions of those responsible for defacing such an important monument on such an important day for all Canadians," the city said. "This act does not speak to the character and values of our citizens and our community."

"We are grateful to the member of the community that alerted us of the vandalism early this morning. We are extremely proud of our staff, RCMP and Fire Services members who were able to quickly remove the graffiti and allow for the Remembrance Day ceremonies to go on, and remain focused on honouring all our veterans, past and present for their selfless sacrifice."

"If you have any information regarding this incident, please contact the Cranbrook RCMP at 250-489-3471."