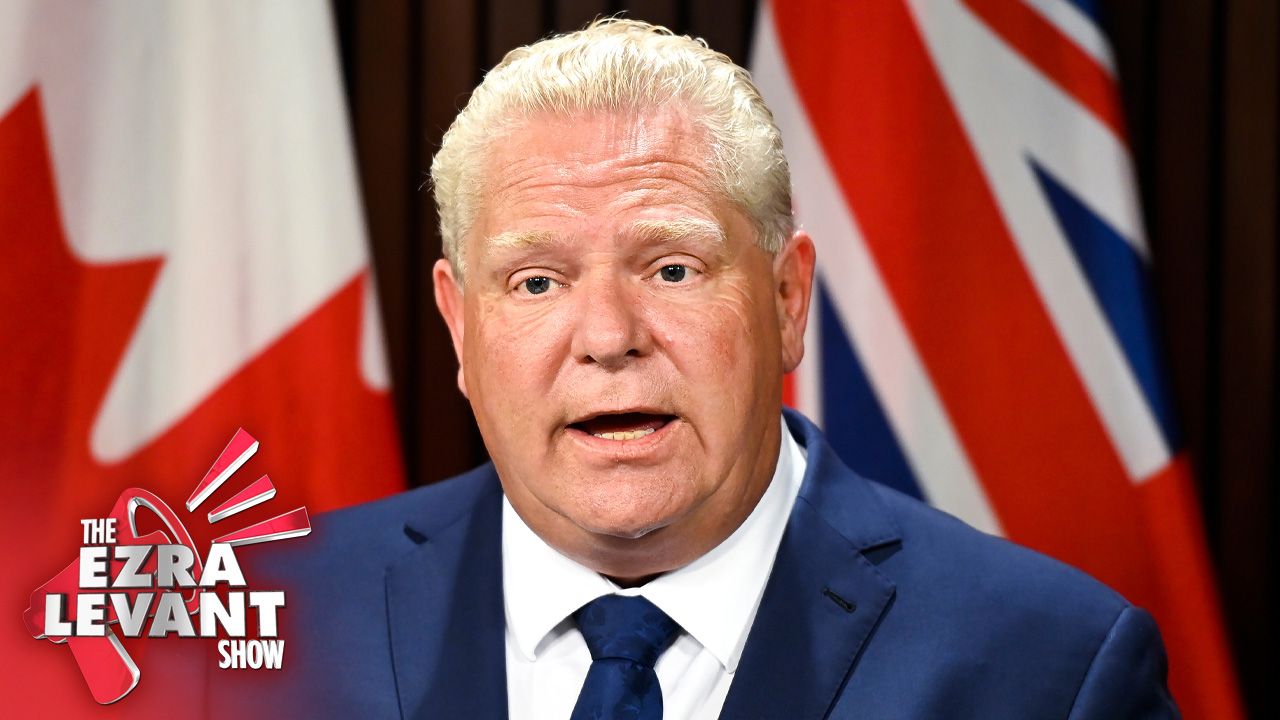 You know our Fight The Fines project. We provide a lawyer for people who get charged under these abusive, unconstitutional lockdown laws. We send a journalist to tell the story of the fine, and then we hire a lawyer and we crowdfund that lawyer’s fees.

We have made almost one hundred videos about these cases — and we have actually taken several hundred such cases, here in Canada, but also in Australia and the United Kingdom. And we’re about to launch a major expansion of this project — we’re just putting the finishing touches on it but I’ll tell you as soon as we can.

This is the home page for our project. Just type in FightTheFines.com and you’ll see it.

It shows the same image we’ve been using since last April — almost a year. These images have been seen millions of times.

No big deal, right? You’re probably wonder what my point is, right?

Well, do you see that police vest? It’s just a generic stock photo of a police vest. A few days ago I received an email from Doug Ford’s Justice Department threatening me to take it down immediately, and if I didn’t, they would sue me in about four different ways. I’m not even kidding.

We’ve been the photo for almost a year, literally millions of views, and out of the blue we get a threat letter from the Justice Department of Ontario.

Please see the attached letter on behalf of the Ontario Provincial Police for your urgent attention. I look forward to your swift action and response.

For a photo that has been up for nearly a year.

Let’s see what they say:

I am counsel with the Ministry of the Attorney General representing the Ontario Provincial Police (OPP) with respect to the above-noted issue.
This letter is with regards to a photograph that Rebel News published in multiple locations on its website, ostensibly in support of a campaign entitled “Fight the Fines Canada” and primarily located at the following URLs: https://www.rebelnews.com/fight_the_fines_canada
https://www.rebelnews.com/help_fight_the_fines

Right. That’s the photo I’ve been showing you.

Here’s another version of it. Those are the two websites in their letter. Now listen to what they say.

The photograph is also used in various other locations on Rebel News’ website as part of advertisements to raise funds from readers in furtherance of a stated goal to “[hire] a team of lawyers to defend every single Canadian who gets a lockdown ticket.”

The photograph in question is of an OPP officer in their service uniform. Presently, the origin of the photograph is unclear; however, it is being used by Rebel News without the express authorization of either the OPP or the individual officer.”

Now let me stop there. Do you see an officer?

I see a torso of an officer. With the photo cropped so as not to show his face.

So did the police officer really complain? I mean, this threat letter says the OPP complained and the cop complained — but they say they don’t know where the photo came from, and they clearly can’t see the face on it. Is this a real letter? Or a shakedown? Well, let me read more.

The officer’s first initial and last name clearly appear on their uniform in several of the cropped versions of the photograph across the Rebel News web domain, as well as on the URLs listed above, particularly when viewed from a mobile browser.

Is that true? It is not true.

There is no face — we cropped it out. You cannot read the name. I magnified it to maximum resolution, and it’s not readable. It just isn’t — do you know what that name is?

I don’t think the Justice Department lawyers do either, actually. Because they can’t even identify the photo.

But I just called up Sean White, the lawyer from the Justice Department who threatened me. And because I’m a journalist, and I’m obviously dealing with an attempt to intimidate me on the other end, I thought I’d better record things. Just for my own safety. So here’s how that call went.