'As long as we can bear arms, we will never be marched to the gas chambers again,' said Tzvi Waldman, the founder of the New York State Jewish Gun Club. 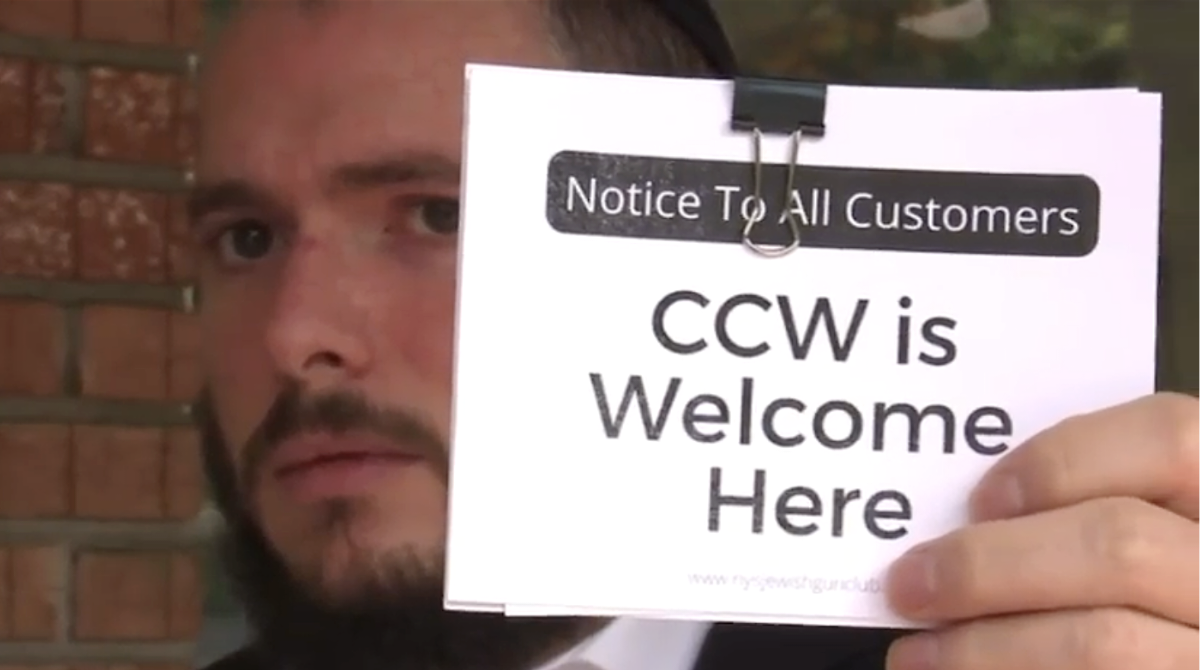 Tzvi and the NYS Gun Club are encouraging business owners in Rockland, in upstate New York, to post a sign saying "Concealed Carry Weapons Welcome Here," and to indicate that the business is armed and otherwise not a soft target for attack. Waldman is also distributing letters to local businesses and customers, explaining how Governor Hochul's new law will make the community less safe.

And the laws that the state passed will definitely be overturned."
“In a greater sense the Supreme Court ruling is a reminder of how thankful we have to be to live in the country,” says Waldman. “As long as we can bear arms, we will never be marched to the gas chambers again.

The new laws, passed by the Democrat-controlled state legislature, are in response to a recent Supreme Court ruling which overturned NYS concealed carry laws. The legislation requires those seeking a concealed carry permit to submit to a comprehensive background check, including the examination of applicants' social media accounts, and to undergo enhanced training. The law, which takes effect September 1, also bans body armour and permit holders from, well, almost anywhere except Walmart and Costco.

According to the text of the bill:

"Locations include public transit; houses of worship; schools/daycares; parks; businesses serving alcohol; hospitals; sports/entertainment venues; government buildings, homeless shelters; poll sites; and Times Square. Guns will also be outlawed in all businesses and on private property unless the owner expressly grants permission for firearms. Businesses will have to post a sign stating armed patrons are welcome."

The new gun legislation will not only limit where people can carry firearms, but will also place restrictions on who can get a permit.

It requires that applicants undergo "15 hours of in-person training at a firing range; an in-person interview; and a review of social media accounts."

A statement provided by Waldman to Rebel News explains that he will challenge the Democrat law and he is confident it will not stand:

"Even after the very clear Supreme Court ruling in NYSRPA v. Bruen, New York State Governor Hochul still cannot comprehend the meaning of 'shall not be infringed.' The disregard for the average citizen’s ability to defend themselves is just another example of how progressive ideology blinds the politicians to logical thinking.

When a politician writes laws that fly in the face of the Supreme Court, the only conclusion is that they are trying to cling onto the monopoly of power and that’s a concern. This law is not going to stand. We are going to fight it in the courts and we are going to win. Any literate person who has read the Supreme Court’s ruling can see that the new law is unconstitutional and will get overturned.

There are people with pistol permits that spent time and money and got the appropriate training to defend themselves, their family, and their fellow neighbors against violence. To charge someone as a felon if they walk into an ice cream shop with their kids while exercising their Second Amendment right is outrageous."

In January, a synagogue in Colleyville Texas, was attacked by a 44-year-old British national, Malik Faisal, who initially took four people hostage, including the Rabbi, until the shul was stormed by the FBI Hostage Rescue Team 11 hours later. Faisal was killed.

In December 2019, members of the Monsey, NY, Netzach Yisroel Congregation, were attacked by a man with a butcher knife as they gathered in the home of the rabbi for Hannukah. Five men were injured before the attacker was repelled. One man, Joseph Neumann, died of his injuries and the stabber, Grafton Thomas, has been recently ruled incompetent to stand trial.

New York is leading the country in anti-Semitic attacks:

🚨News of yet another violent, antisemitic attack in NY. Rabbi Yehoshua Lefkowitz was just assaulted in Crown Heights. NYC’s streets & subways are filled with violence, hate, & lawlessness. Many electeds empower it & the justice system remains handcuffed. This has to end NOW! pic.twitter.com/FBE1eu1xaE

The Jpost detailed some of the events contributing to the stark uptick in anti-Semitic violence in New York, including a May 2022, bb gun attack at a Brooklyn synagogue and a June arson in Gramercy Park.

Customers and businesses in New York State that want some pro-gun signage of their own can email [email protected] or visit https://nysjewishgunclub.com/ccwsigns

In Canada, Justin Trudeau is banning handguns, stripping lawfully obtained and highly regulated property away from innocent law-abiding Canadians, and scapegoating them for gang violence in Canada's big cities. To send a message to the liberals that you oppose their gun grab, sign the petition at www.handsoffourguns.ca