The attackers threw a Molotov cocktail into the office, set a wall ablaze, and left threatening graffiti which read in part, 'if abortions aren't safe then you aren't either.' 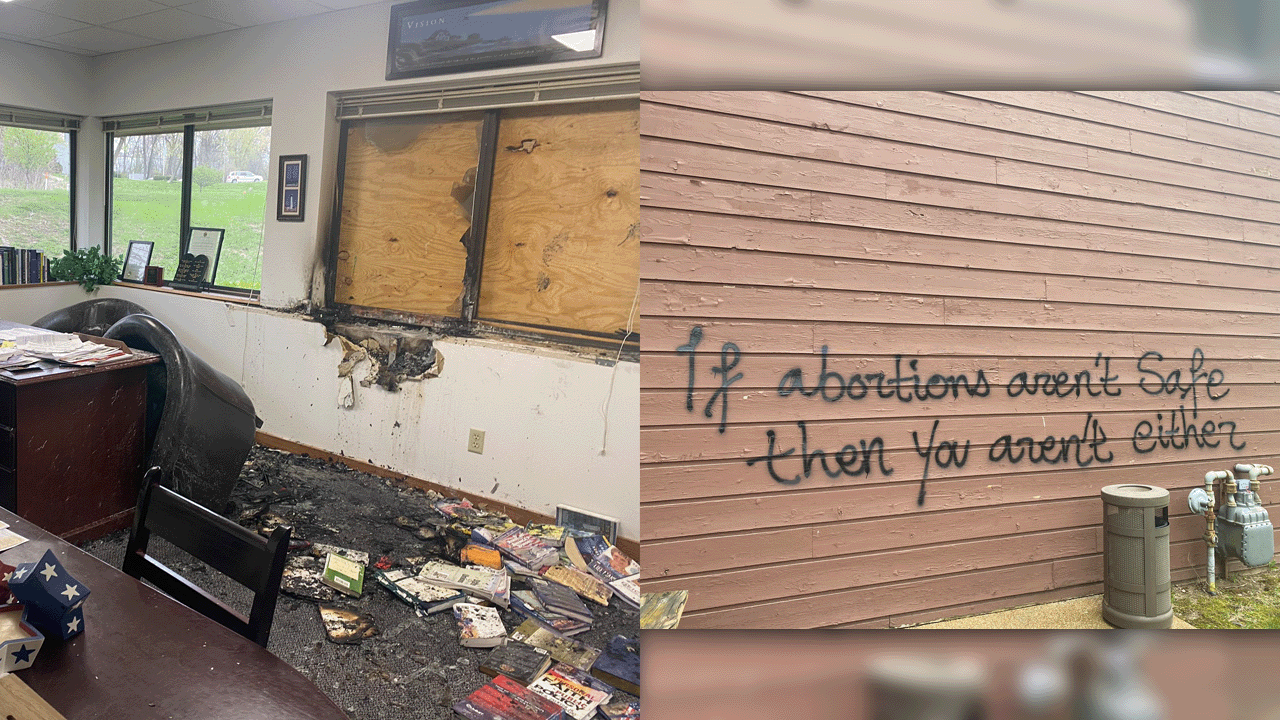 The attack, which occurred early Sunday morning, comes a week after an early draft of a United States Supreme Court majority opinion leaked, which indicated that the landmark Roe v. Wade legislation would be overturned.

While police say no one was in the building at the time of the attack, investigators say the attackers used a Molotov cocktail that was thrown through the window and failed to ignite. In addition, the attackers, who remain at large, set another fire nearby that immolated part of a wall.

Graffiti left by the attackers indicated their allegiance to the radical left-wing Antifa movement, bearing the anarchy symbol and the numbers “1312,” which stands for “All Cops Are Bastards.”

Another piece of graffiti read “if abortions aren’t safe, then you aren’t either.”

“We have made our federal partners aware of this incident and are working with them and the Madison Fire Department as we investigate this arson,” said the Madison Police Department in a statement.

Speaking to the press, Julaine Appling, president of the organization, described the attack as “a direct threat against us.”

“Imagine if somebody had been in the office when this happened,” she added. “They would have been hurt.”

Wisconsin Gov. Tony Evers condemned the attack in a statement, calling on pro-choice protesters to engage in politics without resorting to violence.

“We condemn violence and hatred in all forms, including the actions at Wisconsin Family Action in Madison last night,” Evers said. “We reject violence against any person for disagreeing with another’s view.  Violence is not the way forward. Hurting others is never the answer.”

“We will work against overturning Roe and attacks on reproductive rights by leading with empathy and compassion,” he added. “We will defend what we believe in with our words and our voices — in the streets, in halls of government, and at the ballot box. In Wisconsin, we must lead by example.”

We will work against overturning Roe and attacks on reproductive rights by leading with empathy and compassion. We will defend what we believe in with our words and our voices—in the streets, in halls of government, and at the ballot box. In Wisconsin, we must lead by example.

Posting on Twitter, Republican Sen. Ron Jonhson condemned the attack, calling it “abhorrent and should be condemned by all.”

This attack is abhorrent and should be condemned by all. https://t.co/CGnPmMJUmo

A reporter for Rewire News Group, Caroline Reilly, celebrated the attack and called for more violence against pro-life groups, as reported by journalist Andy Ngo.