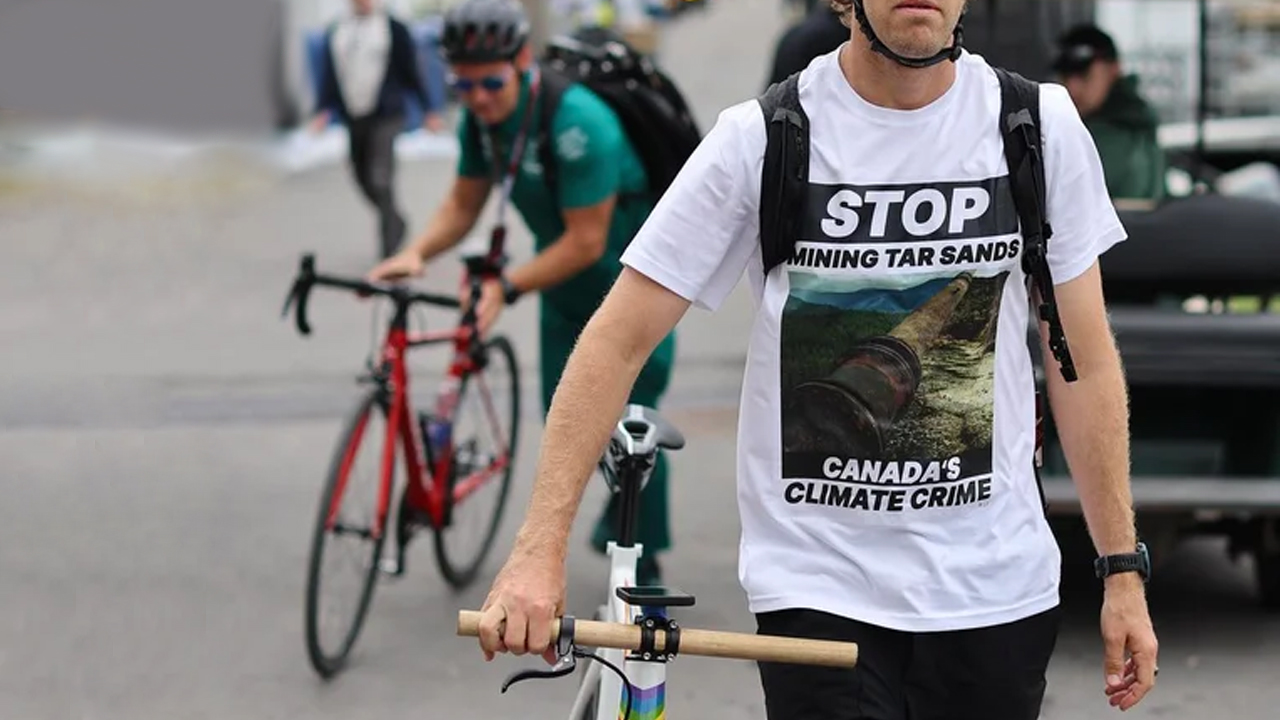 Sebastian Vettel, a German Formula One driver for Scuderia Ferrari is a four-time Formula One World Champion and regarded by many as one of the greatest drivers in the history of the sport. He is, however, not one of the brightest thinkers in the realm of motorsports.

Millionaire who drives and flies around the world for a living, and whose country is heated nearly exclusively by Russian gas, complains about ethical oil. https://t.co/DlcAro9bty

34-year-old Vettel was pictured in Montreal showing his climate street cred by riding a bike adorned with a rainbow flag for Pride Season and donning a t-shirt with an image of a pipeline which read "stop mining tar sands" and "Canada's climate crime".

While Vettel is showing his concern for Canada's so-called climate criminality, he seems unbothered by what some might consider his own. After all, he does spend all year flying first class around the world from one exotic locale to another to race high-emitting cars. This year's F1 circuit has stops in Spain, Monaco, Montreal, Italy, the United States, Australia, Azerbaijan and Saudi Arabia.

Human rights don't seem to be a consideration for Vittel, either.

The Saudi kingdom-controlled Oil Company, Aramco based in Dhahran is a leading sponsor of F1 racing. Vettel wears the Aramco logo on his racing suit.

Intrepid Twitter user points out that this guy has an Aramco label on his shirt, indicating a sponsorship by the Saudi oil giant.

He's not against oil. Just against the peaceful kind https://t.co/f2aFMdZ4f9

Saudi Arabia has been identified as one of the world's worst human rights offenders, frequently handing down lengthy prison sentences and torture on political dissidents and their families. Women in the KSA face systemic discrimination in relation to marriage, family, divorce, and decisions relating to children, including child custody. Women are also subject to strict religious dress laws.

As of 2020, Aramco is one of the largest companies in the world by revenue. In May, the state-backed company overtook Apple as the world's most valuable company after an 80% surge in profits in the first quarter of 2022, a spike caused in part by the Russian war on Ukraine.

Some, including this author, accuse Vettel's homeland of Germany of playing a major role in funding the Russian war effort through purchase contracts with Kremlin-controlled gas company, Gazprom. This fact has apparently not made its way into Vittel's dashboard. Gazprom earned more than $20 billion USD from sales to Europe in the first two months of 2022.

According to DW, Germany buys 50% of its natural gas from Russia and Germany took in 20% of all gas exports produced by the expansionist oligarchy.

In contrast, the oil sands play a role in affirming human rights and minority prosperity. A recent brief prepared by the Oilsands Community Alliance detailed the economic benefit to Canada's indigenous peoples through oil and gas partnerships.

In 2019, Indigenous companies in the Wood Buffalo region had direct business valued at $1.7 billion with oil sands operators — 22% higher than in 2018 and 45% higher than in 2017. Indigenous people made up 7.4% of the industry’s workforce in 2019 when the percentage of the Canadian population identifying as Indigenous in Canada is just 4.9%.

Vettel didn't have to come to Canada to fight for justice. He could start by looking at himself in his rearview mirror.