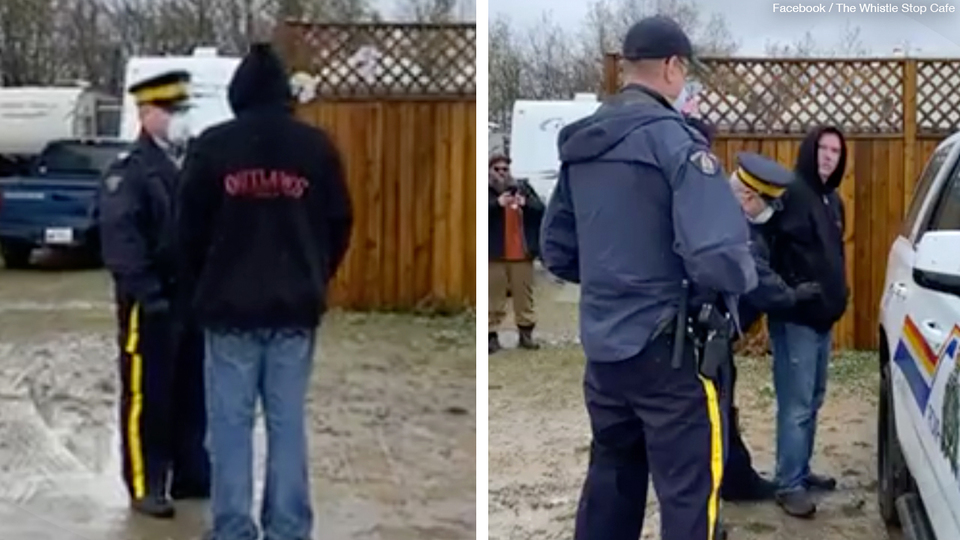 Chris Scott of the Whistle Stop Cafe is back in court today, fighting the secret Alberta court order that lead to him being jailed for three days.

Re: court today. Alberta Health Services failed to tell Whistlestop owner Chris Scott's lawyer they were seeking an order restraining Scott's charter rights. They also failed a Calgary judge that Scott had a lawyer at all Scott spent 3 days in jail because of that order.

So in Alberta, the sneaky weirdos at AHS got a court order resulting in a man's incarceration by hiding known facts from a judge while denying the man his right to be represented by a lawyer Secret courts. Secret court orders and denial of legal representation by the government

Williamson: AHS memorandum mischaracterizes the issues before the court this morning. We are here to appeal the lower courts refusal to hear our arguments on procedural fairness

Williamson is laying out how AHS got things wrong in their written submissions to the court. "We attempted twice to have the urgent aspects of our case heard." "procedural fairness was breached at the outset by AHS"
"AHS breached its sacrosanct duty to inform the court about legal representation that resulted in the incarceration of this man"
Williamson is now laying out the consequences for all of us if this sort of AHS behavior is allowed to stand, that the government can deny you legal protections in the justice system and then you have no remedy before the courts for that denial of your rights.
"The state should not be able to go into court on an ex-parte application.. knowing there is representation. This is an exceptional case because of the consequences to the justice system. This can lead to great mischief down the road."
Williamson: AHS knew Scott had representation. Proof? They got the ex parte order on a Thursday afternoon. Then they sent immediately to me Thurs night. (meaning that they knew how to get ahold of him moments after the order was granted so why not before? Sleazy business)
Correcting an earlier spelling mistake: Williamson is accusing AHS of "obscuring the existence of counsel and then subjecting this man to the consequences of that lack of representation. Then the court delayed justice by failing to hear arguments about procedural fairness"
"our appeal is based on the ruling of Justice Rooke (the lower court that granted the order) to not hear our procedural arguments on May 13." Why? asks judge "...because of the general importance to not deny the court information that there was counsel involved"
Two lawyers are up now for AHS - government sparing no expense. They will argue that Chris Scott should have no right to appeal the sneaky and underhanded way they got the order that resulted in Scott's 3 day incarceration. You can help is at http://FightTheFines.com
AHS lawyer seems to think the Scott contempt hearing was yesterday, but it was Monday. AHS is arguing AHS has legal and statutory rights to violate your rights by seeking secret court orders without telling you or your lawyer. Remember, this is a DINER not a crime syndicate
Williamson says he became aware of secret order on Thursday night from AHS (who failed to inform him before hand but could inform him after, but ok) after it was granted and worked all night Friday to prepare to get it tossed. Issuing Judge Rooke was unwilling to hear arguments
If I'm understanding this correctly, AHS isn't arguing that they weren't wrong in their behaviour, but that Whistlestop and Williamson should not be trying to have certain issues heard separately.
Williamson is noting that it is the government's behavior that made it impossible for him to be able to proceed on all issues at once. (The ex parte application left them scrambling)
Well that's it court is done. The court of appeals judge will make her decision as soon as possible, which could be weeks. If you'd like to help us stop the sneaky weirdos at AHS who are getting secret court orders against Albertans donate today at http://FightTheFines.com