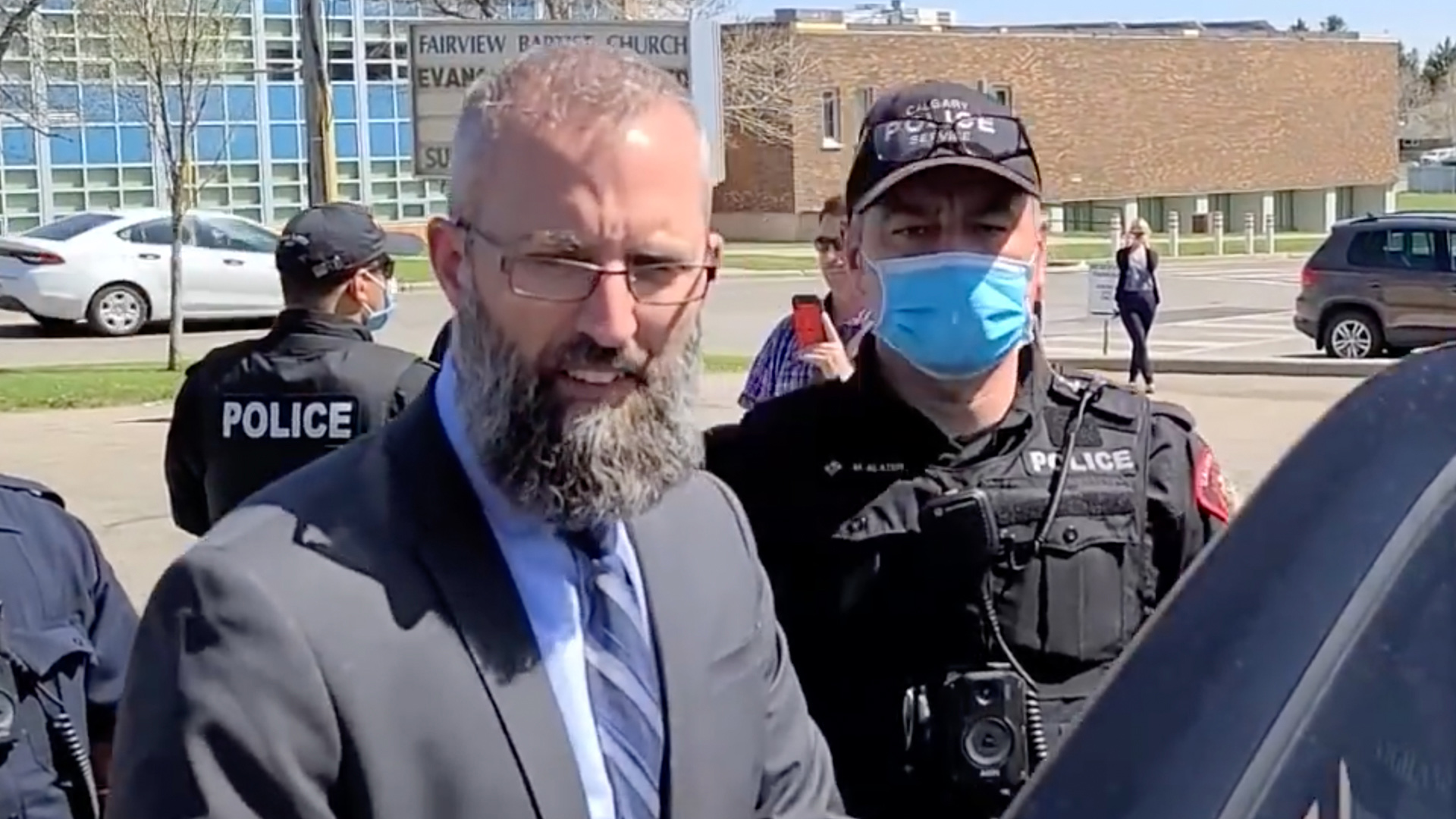 Pastor Tim Stephens of Fairview Baptist Church in Calgary has been under police and Alberta Health Services surveillance for months, because he refuses to limit his congregation and force them into masks.

This weekend, after services at Fairview Baptist, Calgary police arrested Pastor Tim in front of his wife and crying children.

Back in court for Pastor Tim Stephens this afternoon.

He was offered bail yesterday but upon seeing his conditions would not sign anything that required him to limit his congregation.

He's been held in Calgary remand since Sunday as a prisoner of conscience.

Alberta Health Services has the same lawyers as yesterday, Kyle Fowler from AHS, and the outside hired gun, J. Mark Jackson from Field Law (I wonder what that's costing us).

The amazing Leighton Grey from JCCF is back for Tim Stephens.

Stephens is in a call with his lawyer before the hearing starts.

Justice Adam Germain is presiding. He mentioned yesterday that he is tasked with expediting lockdown infractions through the court system through June.

Pastor Tim is sitting in the accused box.

Its hard to see an innocent man like this.

Blue shirt. No tie. Dress pants. Looks like the church clothes they [arrested] him in.

He has no mask on, beard on full display.

James Kitchen from JCCF is also on the call.

Fowler starts, he isn't backing down.

He wants Stephens to abide by restrictions that force him under threat of confinement to adhere to public health restrictions.

Leighton Grey "by operation of law" Mr Stephens is exempt by the May 6th order was amended by associate Chief Justice John Rooke.

"We can't have him bound by that order"... "it would be proper in law to have Pastor Stephens do that"

Leighton Grey is now saying that Pastor Stephens was never even served with the May 6 the order, even if the crown thought it applies to him.

"Before this man should be immediately released without any conditions"

Grey: "This is a... vexatious hopeless application"

"Pastor Stevens cannot have committed contempt of an order that precedes May 13th amendments."

"His Charter rights are being violated"

Grey: "I don't understand why Alberta Health Services is beating this drum".

"I don't understand why it's necessary for Alberta Health Services to demand this man be bound by conditions that require him comply with the May 6 order."

Justice Germain: is this the hill your client wants to die on?

I want to release your client. I'm the judge that's going to be hearing this on June 16.

Do we have a stand off for the sake of standing off?

Grey: "by operation of law" Mr Stephens is exempt by the May 6th order was amended by associate Chief Justice John Rooke. "We can't have him bound by that order"... "it would be improper in law to have Pastor Stephens do that"

(Fowler for AHS isn't budging. He's going to keep this guy in jail if he can. Just like Karen Thorsrud. He wants Stephens' rearrested on Sunday. That's obvious)

Grey is asking for a few minutes to talk to his client.

Justice Germain is trying to find a solution to get Stephens out today.

AHS doesn't object to allowing Grey/Stephens an opportunity to apply to amend the release order within reasonable notice.

Grey wants to be able to get instructions from his client about the wording of the release order.

Court is adjourning til 3 pm.

Justice Germain says that he waited until 6:00 last night for Stephens to agree to the conditions of his release.

Court is back in 2 mins for the bail hearing of Pastor Tim Stephens.

He could remain behind bars if his bail conditions are something he cannot in good conscience do, like turn away congregants to meet the health restriction hard cap of 15 people for a worship service.

Okay something must have happened because we're not back in court. I'm just waiting for word from the JCCF about what is happening next with pastor Tim Stephens.

He's got eight children, ages 5 months to 12 years, and a beautiful wife that he needs to be at home with.