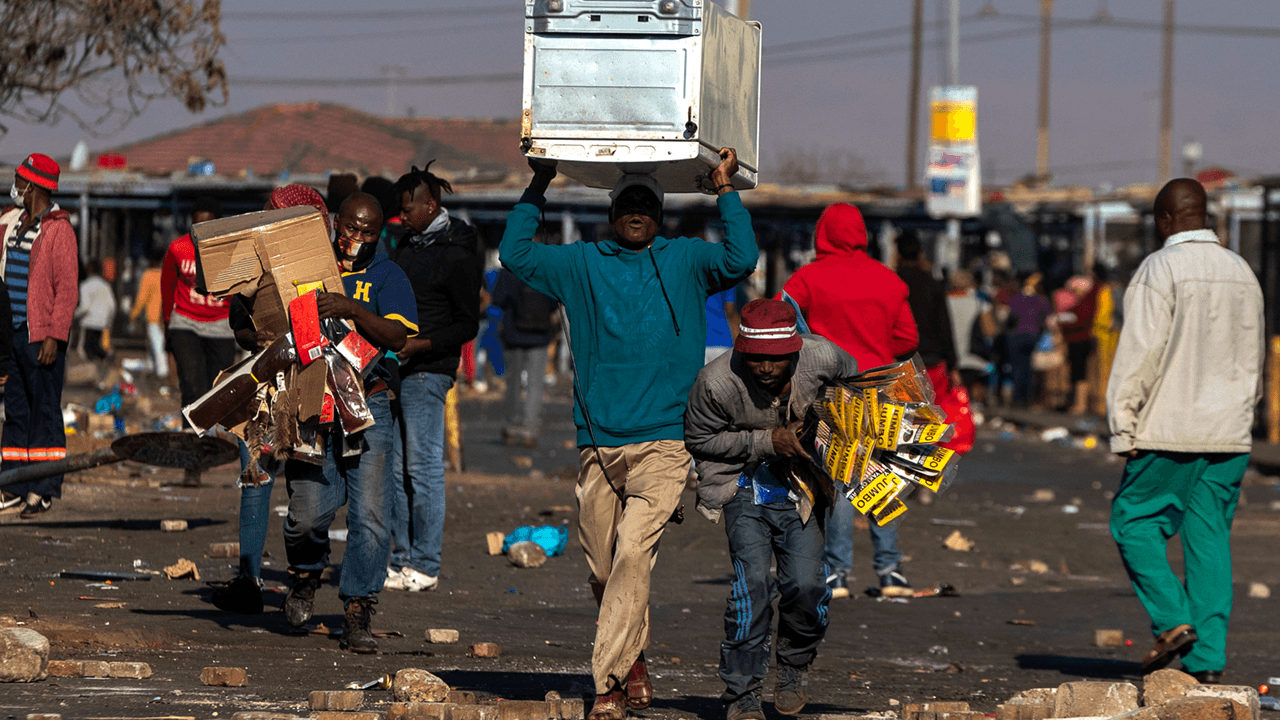 Riots have erupted across South Africa as former leader Jacob Zuma faces a 15-month prison sentence of contempt of court for refusing to testify before a state-backed inquiry into allegations of high-level corruption. Zuma, who led South Africa as its president between 2009 and 2018, is alleged to have allowed foreign nationals to pilfer state resources and exercise influence over government decisions.

Last Wednesday, Zuma turned himself in to prison to begin serving his prison sentence. Zuma continues to maintain his innocence and has asked the court to withdraw his jail sentence, based on a rule that allows judgments to be reconsidered if made in the absence of the accused. According to the Independent, legal experts say that he has little chance of overturning the verdict — a bid to secure his release was already rejected at a lower regional court last Friday.

Protesters, who took to the streets to riot over Zuma’s arrest, engaged in mass looting across the country as police struggled to contain the uprising. Protesters continue to block main roads, burning police vehicles and attacking civilians.

How private security deals with looters in South Africa. These looters should count themselves lucky they aren’t firing live rounds. pic.twitter.com/LXR0kQW1z6

As reported by local South African press, a mall in Pietermaritzburg was set on fire, while rioters looter and torched stores in Johannesburg and Durban. Police Major General Mathapelo Peters told the press that at least three officers were injured in the violence, with one requiring hospitalization from a gunshot wound.

The South African National Defence Force is also expected to deploy the military in affected provinces to quell the riots, which continue unabated. The deployment will “provide safety and a safe working environment for members of the [police] and other law enforcement agencies whilst they carry out their constitutionally mandated law and order duties,” according to a press statement.

On Sunday, South African President Cyril Ramaphosa, who succeeded Zuma in 2018, condemned the “sporadic but increasingly violent protests” and said that the government “will not tolerate acts of criminality.” Both Zuma and Ramaphosa belong to the African National Congress party in South Africa.

Despite his remarks, riots persisted overnight, and some citizens were forced to arm themselves in the absence of police. Footage of the violence has been shared all over social media, with footage of armed civilians taking up defence of their homes against rioters.

The police are unable to mount a response to the rioters in Durban. pic.twitter.com/sUmQERrIn1

South African opposition party the Democratic Alliance condemned Ramaphosa for his refusal to acknowledge the “ANC’s role in this crisis, as this is essentially their internal war being waged on our streets.”

Zuma’s foundation, which continues to maintain influence over South African politics, praised the violence, describing it as “reactive righteous anger of the people … which others have characterized as violence,” according to the Financial Times. The organization claims that the riots were in response to the “violent provocation” of Zuma’s prison sentence.

As of Monday, at least 219 people have been arrested over the riots, which saw at least six people killed.