Victorian Governor LIES to avoid the responsibility of her job

Hon Linda Dessau's office shirks its role in safeguarding the state's democracy, ignores the will of 125k+ people

The Victorian Governor has officially responded to the Rebel News ‘Kill the Bill’ petition which gained more than 125,000 signatures.

It was created in opposition to Daniel Andrews’ controversial and widely criticised pandemic legislation, which has been passed into law after weeks of political theatre in the crossbench.

The petition asked the Governor of Victoria, the Honourable Linda Dessau AC, to do two things: withhold Royal Assent and warn the Victorian Premier of the consequences of his proposed law.

After the legislation passed into law – at which point there is nothing anyone can do about it – the Governor of Victoria's office sent Rebel News a reply to their petition.

The letter claimed that the Governor does not have the power to deny Royal Assent to a bill.

“Governors are not part of that political process. As part of their constitutional duty, they give Royal Assent when a bill is presented, ensuring it is accompanied by the necessary certification that it has been validly passed by the Parliament. Because we live in a representative democracy, no Australian Governor-General nor Governor has ever denied Royal Assent in the history of the Westminster system’s operation in our country.”

Twice in the 1850s, the Victorian Governor withheld Royal Assent (Oaths of Office Bill 1857 and the Duration of Parliament Bill) and then again in 2005 when Royal Assent was temporarily withheld on advice from the Premier for the Racing and Gambling Acts (Amendment) Bill.

This is in addition to five Bills that have been reserved by the Governor. 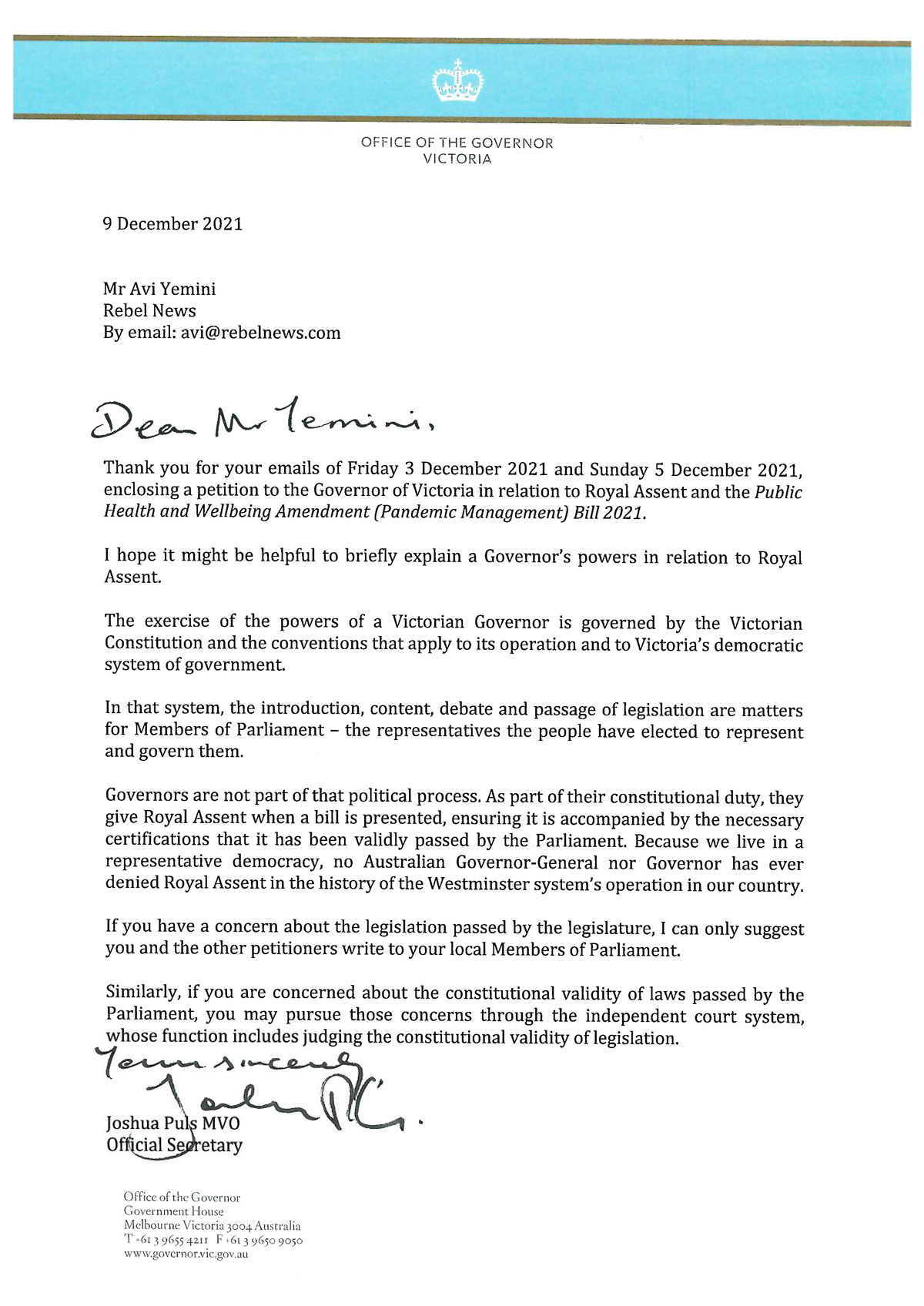 While it is not a convention for the Governor to contradict Parliament, the ability to do so is the primary function of their role – the rest of which is largely ceremonial. State Governors and the Federal Governor-General are a power-check against Parliament that exists to ensure the spirit of the Constitution is maintained by the laws which Parliament passes.

If a piece of legislation violates the Constitution, it is the job of the Governor to withhold Royal Assent to prevent it from becoming law. This is the chief mechanism that prevents Australia from dissolving into a dictatorship, even in the presence of a bad batch of politicians.

In the case where hundreds of thousands took to the streets of Victoria to oppose a Bill which over 60 high-ranking members of the Judiciary described as ‘giving the Premier dictatorial powers’ – it would be a reasonable expectation that the Governor would enter the public discussion.

Although the Governor does not exercise their Reserve powers very often, the 2005 denial of Royal Assent reopened the legal discussion.

It was found that after the Australia Act of 1986 was passed, the power of Royal Assent was transferred from the Monarch directly to the Governor (unless the Queen was physically present in Victorian Parliament). Because of that decision, when the Constitution Act of 1975 references ‘Her Majesty’ in section 15, it is actually referring to the Governor of Victoria.

The legal debate concluded that there was no doubt that the Governor has the power of Royal Assent and therefore, by reasonable assumption, the converse power to withhold Royal Assent – with or without the Premier’s advice.

If the Governor of Victoria refuses to take an active interest in the one responsibility that her Office is designed to carry out, why is the taxpayer forking out hundreds of thousands of dollars a year for her salary?