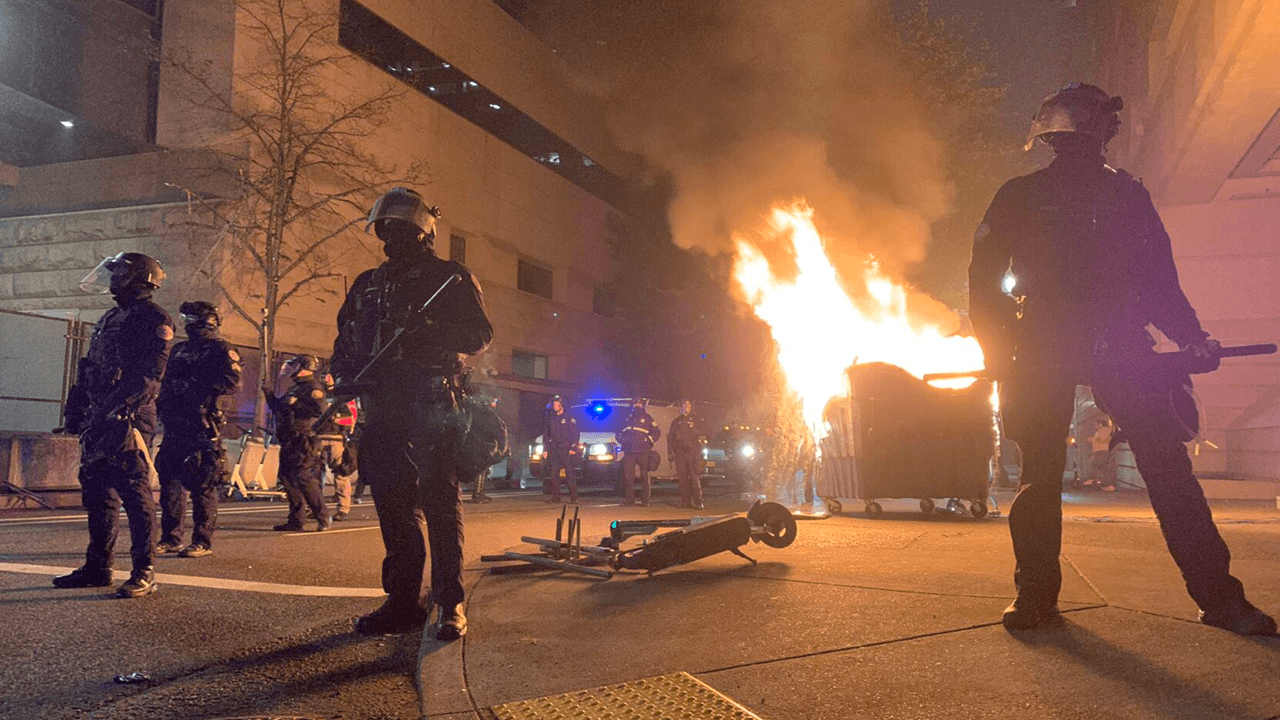 The riot took place after a separate peaceful rally that took place earlier in the evening, Portland police said that the activists had been “sing[ing] and chant[ing] as they walked peacefully.”

Shortly after the peaceful protest took place, a group of people “wearing helmets and carrying gas masks, backpacks, and tote bags” arrived. Portland police declared a riot and described the events that unfolded as reported by the Daily Wire:

Portland #antifa tried to burn down the Justice Center tonight to commemorate their burning of the same occupied facility a year ago. #BLM pic.twitter.com/jZW8mIwIl1

Watch with the sound on: #Antifa in Portland continue their rampage through downtown, smashing up windows on businesses indiscriminately. The riot was organized to honor the life of amateur adult film performer #GeorgeFloyd on the anniversary of his death. pic.twitter.com/9jSpGNFOBd

#Antifa set off a smoke bomb to conceal themselves before proceeding to smash up Portland City Hall at the #GeorgeFloyd riot tonight. #PortlandRiots pic.twitter.com/HYMOvzL3op

Portland #antifa smashed up another Starbucks & threw a firework inside to try and set the place on fire. pic.twitter.com/Yu1L0x6ItS

#Antifa in Portland vandalized a driver’s car & slashed his tires at the riot tonight. Police aren’t making any arrests so far. pic.twitter.com/GPUTBgPYIj

As the #antifa have dispersed to other parts of downtown Portland tonight after setting the fire & smashing up city hall, they’re now targeting businesses again. They’re breaking into stores so that others will loot them.pic.twitter.com/2uQrKSvqiJ

Portland Police were hit with mortar fireworks from #antifa when they retreated from the riot. Antifa set a large fire on the side of the Justice Center that required police & the fire department to respond. pic.twitter.com/DzALkqfniP

Police have retreated from the #antifa riot in downtown Portland. The rioters then marched across park to smash up City Hall again. They have done this repeatedly & even forced their way inside last year. #BLM pic.twitter.com/pdDRsmEts8

Attorney General Merrick Garland was questioned during his Senate confirmation hearing in February if he regarded the extremist violence throughout Portland as “acts of domestic extremism, domestic terrorism.”

“Well, senator, my own definition, which is about the same as the statutory definition is the use of violence or threats of violence in an attempt to disrupt democratic processes,” Garland responded. “So an attack on a courthouse while in operation, trying to prevent judges from actually deciding cases that plainly is, um, domestic extremism, um, domestic terrorism.”

“An attack simply on government property at night or any other kind of circumstances is a clear crime and a serious one and should be punished,” Garland responded. “I don’t mean, I don’t know enough about the facts of the example you’re talking about, but that’s where I draw the line when it one is, both are criminal, but one is a core attack on our democratic institutions.”