Interim Chief: 'vast majority' of officers have been 'extremely professional'

Steve Bell, the interim chief of Ottawa police, stood by the conduct of his officers during the operation to clear the Freedom Convoy out of the nation's capital. 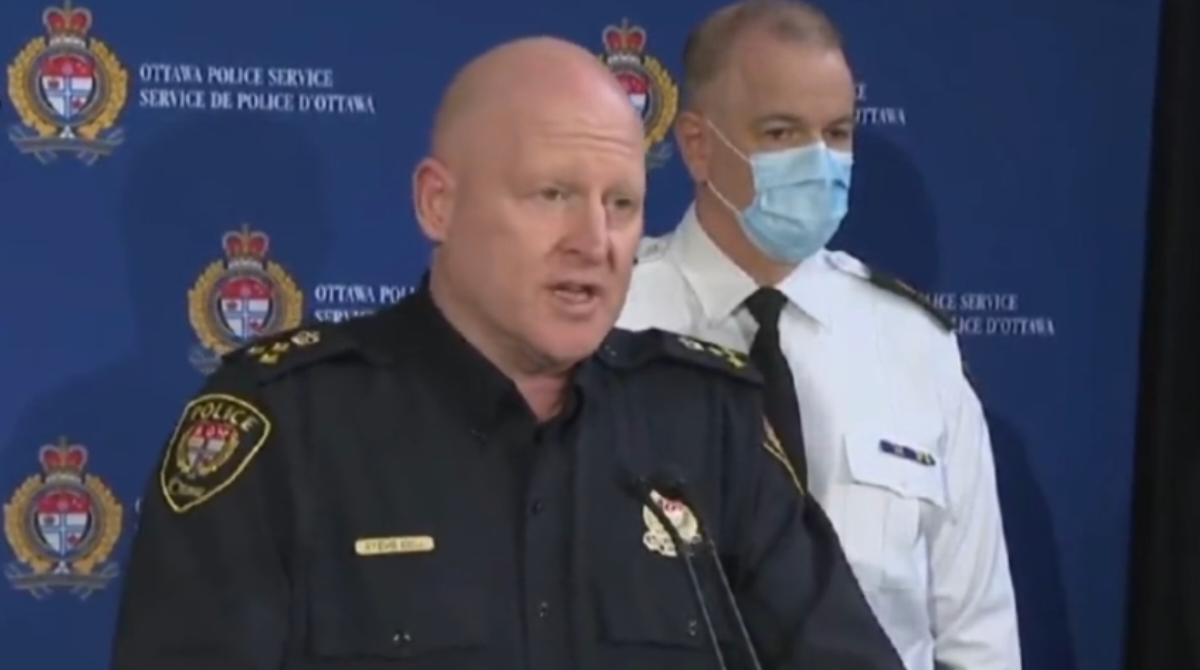 Interim Ottawa police Chief Steve Bell credited his officers for their professional conduct during clashes with protesters while attempting to disperse the Freedom Convoy.

Speaking at a press conference Sunday afternoon, Bell fielded a question from Rebel News reporter David Menzies regarding the use of force against another Rebel reporter, Alexa Lavoie, on Saturday.

Rebel's @TheMenzoid asks Interim Police Chief why one of his officers shot @ThevoiceAlexa point blank with a riot control gun:

"I'm unfamiliar with the incident."

Support her legal fight at https://t.co/CRh7x7FBqjpic.twitter.com/v3Ym0Jb4Ne

“So I'm unfamiliar with the incident your speaking of,” the interim chief said of the video which has been viewed more than 100,000 times on Twitter.

“[T]he vast majority of our members have been extremely professional,” Bell said. “They have executed an extremely methodical plan that has been focused on the safety the residents, the safety of our officers and the safety of the people engaged in the protest.”

Rebel News boss Ezra Levant declared his intentions to sue the Ottawa police for their conduct in a post on Twitter yesterday, saying:

I have spoken with Alexa and with legal counsel. We will sue the police on Alexa's behalf. I know the rest of the Media Party is delighting at Trudeau's brutality and martial law. But we still believe in peace and freedom.

Asked by Menzies about whether he thought the situation in Ottawa warranted the invocation of the never-before-used Emergencies Act, Bell said that he felt both provincial and federal emergency orders were “absolutely supportive to helping us end the illegal occupation of our streets.”

.@TheMenzoid asks Steve Bell, Ottawa's interim Police Chief if Trudeau's invoking of the Emergencies Act was needed. He said it was:

"extremely beneficial in us being able to be where we are today"https://t.co/Ku03mvgT40pic.twitter.com/Rm1ztw9qsb

“What could be described as bylaw infractions were actually terrorizing moments for the city, the residents and the communities that came around those areas,” Bell stated. The legislative backing, the interim chief said, were “extremely beneficial” in helping clear the streets.

Numerous instances of violence happened between police, protesters and journalists, most notably with the trampling of protesters by mounted police yesterday. Ontario's Special Investigations Unit, the police watchdog, announced it was investigating a serious injury reported yesterday during the protest, CBC reported.

Ottawa Police lied. This was the elderly woman trampled by the horses. pic.twitter.com/FGmPoSj9F9

Meet Candy. She’s the Mohawk elder who stood with the Freedom Convoy protesters in Ottawa who was trampled by police horses. She is currently hospitalized. This interview was taken four days ago. pic.twitter.com/GzKZY9wrn0

Another incident saw an officer repeatedly knee an individual who had been detained.

In another occurrence, a heavily armed riot officer stood on a Canadian flag.

A statement posted online by Ottawa police warned protesters that they would be actively tracking down individuals involved and targeting them with financial sanctions and criminal charges.

If you are involved in this protest, we will actively look to identify you and follow up with financial sanctions and criminal charges. #ottawa #ottnews pic.twitter.com/Ic6Q9byfvY

Rebel News journalists have been in Ottawa since the convoy arrived. To support our independent journalism, and to see all of our reporting on the Freedom Convoy, visit ConvoyReports.com.