A decision will be handed down today which may very well send Pastor Artur back to prison once more. 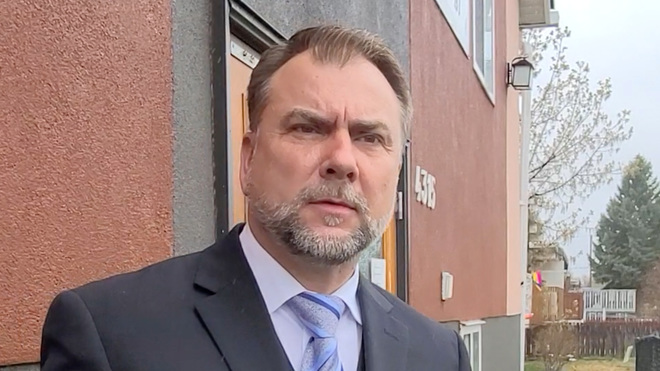 Pastor Artur Pawlowski is back in court today for the final hearing in his contempt of court case. A decision will be handed down today, which may very well send Pastor Artur back to prison once more.

Today's decision will set a legal precedent for other pastors in Canada facing legal battles of their own.

In court this morning on the sentencing of Pastor Art Pawlowksi and restaurant owner Chris Scott. Both men face 3 weeks of jail time for breaking the same court order that closed Art's church and restricted Chris' right to hold a protest against AB govt lockdown restrictions.

Both Scott and Art and David Pawlowki are being helped by the Democracy Fund, a registered Canadian charity. To donate, pls visit FightTheFines.com or SaveArtur.com. Sarah Miller is representing Pawlowski. Chad Miller for Scott.

Justice Adam Germain is handing down the sanctions. He has been tasked with handling most of the high profile so-called covid scofflaws - which in Alberta means pastors who don't kneel before the golden calf of govt and biz owners who don't go broke quietly enough.

Jessica Simpson (Yaniv), the high profile trans litigant who dragged several female estheticians before the human rights tribunal in BC, is on the webex call for Pastor Art and Chris Scott. I overheard Jessica Simpson has asked for transcripts of this hearing for some reason.

Sounds like Chris Scott will be hearing his fate first. Chad Williamson says he has no further submissions to the court.

Germain notes that Chris and Art breached the same court order at approximately the same time. And he says there is an obligation for parity.Germain is rehashing the facts of the Rooke order - that is the one that restricted protests and limited church. Now moving onto Gates order - the one that allowed the unfettered inspection of the Art's street church by health inspectors and police.

Germain is rehashing the facts of the Rooke order - that is the one that restricted protests and limited church. Now moving onto Gates order - the one that allowed the unfettered inspection of the Art's street church by health inspectors and police.

Germain says currently Alberta is in the worst shape ever regarding covid 19. Says Art and Chris are also responsible for the state of covid crisis in Alberta because they caused the public to doubt the severity of the pandemic.

AHS wants 21 days plus costs for Chris Scott and Pastor Art. Dawid Pawlowski is threatened with 10. AHS wants costs at a two and a half times multiplier. Lawyers for Scott and Pawlowskis say jail is inappropriate. Costs are not justified.

Judge says he will particularly consider deterrence as a reason for his sentence. I think this is going to be bad.

Someone is now praying aloud with their microphone on. Sarah Miller reminds everyone to turn their mics off.

The judge is citing cases that imposed jail as a means to force ongoing compliance.

Judge is talking about fines. Concludes fines could be paid regardless of amount (I guess referring to the public's support for Scott and the Pawlowskis). Which I think means jail is a sure thing.

Germain: breaches like this "challenge the authority of the court and bring the administration of justice into disrepute." Cites the court's right to "protect its own dignity." "All 3 breaches are in this more serious category."

Germain is citing the KJJ contempt case - it was a negotiated settlement. He received a sentence of 40 days and costs of 20k, placed on conditions to stay in Alberta until he paid fines. Considers this a more serious case than what he's dealing with today.

Germain now citing the 48k in fines and 68k costs judgement against the Church of God in Aylmer, Ontario as a contemporary decision.

Germain says the Pawlowskis "reveled in their arrest" .....after just saying the men were "arrested in a spectacle" like what we may see in a "third world country" when people protest.

Germain just said the sacrifices of the Rooke order - that outlawed protests - would not offend the charter of rights and freedoms.

Germain says that Art's previous statement to the court as a taunt. Says he made himself a martyr, parlayed his title of pastor into a speaking tour. Germain is upset that Pawlowskis went to the United States to tell their story. (if you protest here, they put you in jail BTW)

Germain is saying Pawlowski has no right to refer to health officials as Nazis - Pawlowski is a POLISH IMMIGRANT.

Germain is upset that Pawlowski went on Fox News and embarrassed the govt and the court system in the land of the First Amendment and Religious Freedom.

Germain says Pawlowski's "vicious" statement to the court was a "cry for jail" and he will paint himself as a "martyred Christian." Cites Pawlowki's ability to raise.

Holy moly. Germain is saying that the men cannot publicly criticize the public health orders unless they provide the other side of the debate - this includes social media posting.

Art Pawlowski sentence: 3 days already served in jail. $3000 for breaching Gates order, $20,000 for Rooke order and service hours (which should be easy enough), and probation.

Germain is giving the 3 men a specific script that they are obligated to post every time they express a view contrary to AHS on social media or anywhere else - regarding masks, distancing, and vaccines.

Judge thanks the lawyers for their professionalism.

No one is going to jail today unless they fail to pay those fines in 36 months.

Written ruling will be available tomorrow at end of business day.