In this Rebel News exclusive, we see what informed consent looks like at COVID vaccination sites in Canada.

On June 30, the federal government of Canada issued an order to print information about “myocarditis” and “pericarditis” onto COVID vaccine labels after reports of heart inflammation exceeded expectations.

Hundreds of thousands of Canadians who belong to the age group most effected have been injected with Moderna's vaccine without knowing the risks of heart inflammation, including those in the Canadian Armed Forces.

Today, Ontarians who belong to that same age group can still get the Moderna vaccine with informed consent.

A “privilege” that was not granted to people who got it before June 30th.

The state-sponsored restrictions on the skeptics of authority range from not being allowed to watch their kid's hockey match to being denied organ transplants. To simply put it, the political scene in Canada is this: 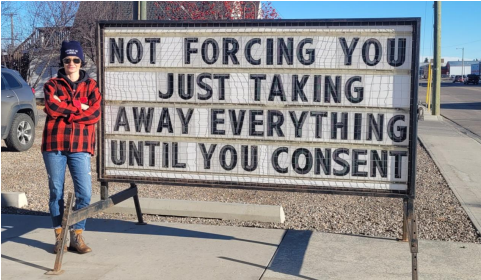 The voluntary consent of the individual is not only being violated, but it’s not even being sought after.

The Nuremberg Code, a set of ethical research principles which was established after Nazi atrocities during the Second World War, demonstrates how vital the voluntary consent of the individual is:

“1. The voluntary consent of the human subject is absolutely essential. This means that the person involved should have legal capacity to give consent; should be so situated as to be able to exercise free power of choice, without the intervention of any element of force, fraud, deceit, duress, overreaching, or other ulterior form of constraint or coercion...”

The clinical trials aren’t done yet and we are only discovering the vaccines varying side effects and the duration of their efficacy as we speak.

French public health authorities recently joined the growing list of European nations which do not recommend Moderna's vaccine for people under the age of 30 due to heart inflammation.

In the United Kingdom, AstraZeneca's vaccine is also not being recommended for people under the age of 30 due to blood cloths.

On the other hand, the immunity of the vaccine by Pfizer, the company that has paid the largest criminal fine for fraudulent marketing in history, has been discovered to wane after two months or so.

While it may not be clinical, the trials appear to be continuing.

Some people are unfortunately experiencing the consequences of this first hand, consequences such as heart inflammation — especially among young men, who are one of the least vulnerable age groups when it comes to COVID-19 deaths, ICU admissions and hospitalizations.

At the end of the day, based on what these vaccine administrators have told us, each individual body could react differently. There is always a risk of developing a heart condition, that we should all be concerned since every day something different comes up, as we approach the second year of “two weeks to flatten the curve.”

DISCLAIMER: No Rebel News employees were forced to take a COVID vaccine in the making of this video. We believe in medical privacy and leave that choice to the individual.