White House Press Sec. regurgitates Biden's claim that 'MAGA Republicans' are 'semi-fascists' who are 'attacking our democracy, taking away our freedom'

In an interview with CNN’s Don Lemon, Jean-Pierre was asked to clarify what President Joe Biden meant when he referred to Trump-supporting Republicans as 'semi-fascists' and 'a threat to our democracy.' 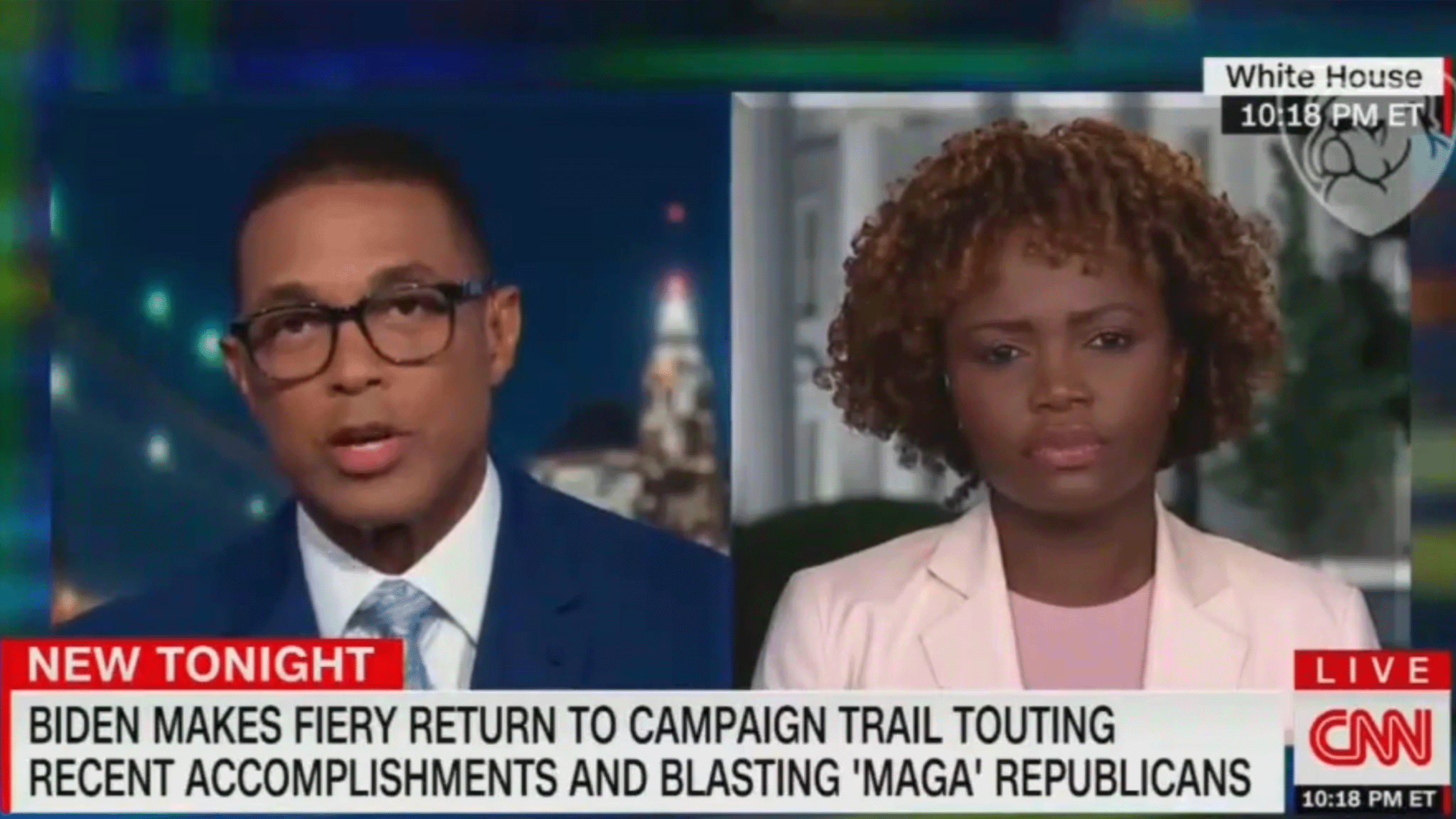 White House Press Secretary Karine Jean-Pierre had no way of answering Don Lemon’s questions about Biden’s incendiary remarks about Republicans, sidestepping the host’s questions by snapping at him for having the audacity to demand clarification.

In an interview with CNN’s Don Lemon, Jean-Pierre was asked to clarify what President Joe Biden meant when he referred to Trump-supporting Republicans as “semi-fascists” and “a threat to our democracy.”

In his speech, Biden claimed that MAGA supporters “embrace political violence.” He did not elaborate on what he meant.

“The MAGA Republicans don’t just threaten our personal rights and economic security,” he said, declaring that “MAGA Republicans” are “a threat to our very democracy. They refuse to accept the will of the people. They embrace — embrace — political violence. They don’t believe in democracy.”

“It’s not hyperbole,” Biden added. “America is at a genuine inflection point. It occurs every six or seven generations in world history. What we’re seeing now is either the beginning or the death knell of an extreme MAGA philosophy… It’s not just Trump, it’s the entire philosophy that underpins the — I’m going to say something — it’s like semi-fascism.”

Following Biden’s remarks, Don Lemon took Jean-Pierre to task to demand clarification for what he meant by “semi-fascism.”

He asked: “The President likened what he called extreme MAGA philosophy to semi-fascism. What exactly is semi-fascism, Karine?”

Jean-Pierre immediately evaded the subject, prompting Lemon to interject and state, “with all due respect. We have a short amount of time. I want to get to all those things  But if you’ll answer my question, we can get to those things.”

“What exactly is semi-fascism?” Lemon repeated.

Unable to answer the question, Jean-Pierre sidestepped Lemon’s remarks to state “by having this back and forth we are actually taking away from the time.”

Instead of providing a definition for semi-fascism, Jean-Pierre repeated Biden’s remarks about the “MAGA element of the Republican party,” whom she claims are “attacking our democracy, they are taking away our freedom.”

Karine Jean-Pierre is struggling to answer Don Lemon's question about what Joe Biden meant by Republicans being "semi-fascists."

She is so terrible at her job. If you can't even handle Don Lemon as a Democrat flack, you are beyond incompetent. pic.twitter.com/vUmI3h9IdX