The convoy has entered Ontario and is closing in on the final stretch to Ottawa. 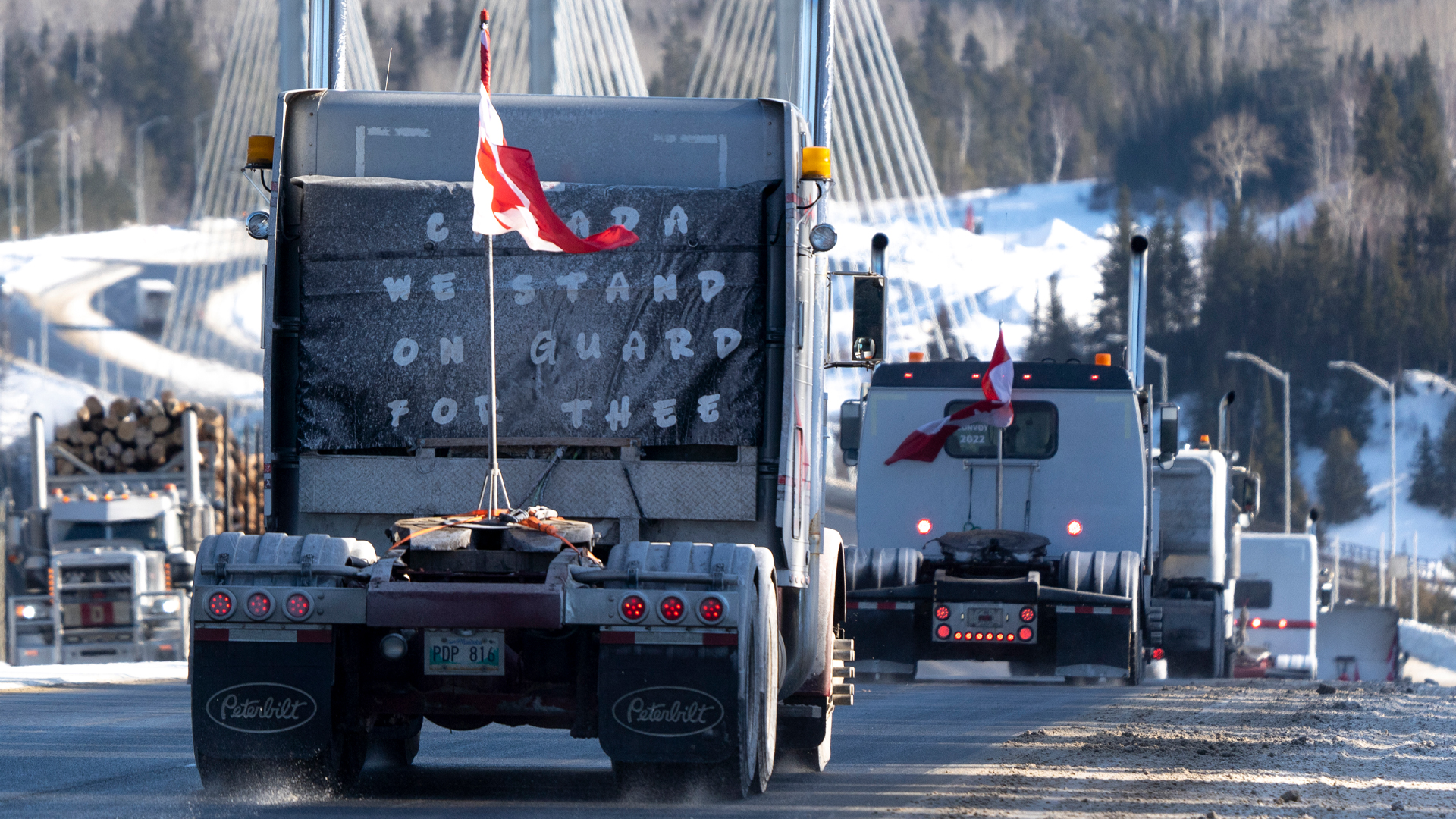 Ready for another Canadian convoy update? Grab a coffee and let’s take a peek at what we are seeing both on the road, and from the desks of public officials and media outlets.

Despite the recent words from Prime Minister Justin Trudeau which labelled the Freedom Convoy as a “small, fringe minority” with “unacceptable views” — among other very negative rumours and articles now circulating — the truckers indeed have kept on truckin’, and continue their journey east!

This morning, the part of the convoy that Rebel reporters Mocha Bezirgan and Selene Galas are embedded with left Thunder Bay, Ontario early in the morning while it was still dark.

HAPPENING NOW:
The western part of the #ConvoyForFreedom2022 is about to hit the road in Thunder Bay to continue towards Ottawa.

Go to https://t.co/Apz9xNQUhJ for more and support our convoy coverage if you can. pic.twitter.com/4GmTPHnhqY

They hit a bit of a snag on Highway 17, but that's no surprise since Canadian weather always presents a unique set of challenges to long highway drives at this time of year!

The highway partially reopened, but there is now a delay for their next stop at Sault Ste Marie.

The #FreedomConvoyCanada from the west has arrived to Nipigon, ON. However, there is uncertainty on the ground regarding the highway closure. https://t.co/Apz9xNQUhJ pic.twitter.com/pUrKSPGKnC

Update:
Part of highway 17 is now open just after the arrival of the #FreedomConvoy2022

Unless the other part of the highway reopens, there will still be a 3hr delay to Sault Ste. Marie, ON.

Update from the convoy:
This is the route the convoy will be taking while traveling towards Sault Ste. Marie, due to the road closure on Hwy 17

We will update more as we come unto new information from our inner sources #FreedomConvoy2022 #TruckersForFreedom @BezirganMocha pic.twitter.com/FZBXKAoPOg

Further east, in another leg of the large and continual line of truckers, Toronto also offered an enthusiastic reception — with a unique display of boom trucks showing their support!

Massive turnout in Toronto for the #ConvoyForFreedom2022.

Citizen journalist catches the state broadcaster(CBC) turning their cameras away from the large crowd.https://t.co/cTm6cKHpsA pic.twitter.com/FKl3EfLI11

Cambridge, London and Port Hope are also representing, with people braving the wind and cold to show their appreciation for the convoy.

Supporters currently gathered at a highway 401 overpass on the east-end of Cambridge, ON to greet and cheer on the truckers' freedom convoy.

Local OPP are friendly and supportive, on scene to direct traffic and ensure no vehicles block the overpass.https://t.co/KMTIfkoh9C pic.twitter.com/iYcssoN2Ap

HAPPENING NOW: Canadians are out in London, Ontario supporting The Trucker's Convoy!

Check out https://t.co/DEN7zzSz9G for more.

As for what reactions we are seeing to the convoy, let’s start with Canadian Prime Minister Justin Trudeau.

Today, Trudeau announced that he has been ”exposed to COVID-19” and, despite a negative rapid test and having no symptoms, as well as Ontario rules not requiring fully vaccinated, symptomless individuals to isolate, the prime minister is isolating for five days and working from home.

Last night, I learned that I have been exposed to COVID-19. My rapid test result was negative. I am following @OttawaHealth rules and isolating for five days. I feel fine and will be working from home. Stay safe, everyone – and please get vaccinated.

Trudeau has weaponized police forces against the peaceful trucker convoy.

Trudeau himself has made an excuse to hide from the media for five days -- he's triple-vaxxed and had a negative Covid test, but he's hiding.

He'll let his cops block democracy. That's how Castro does it.

Then, there is NDP leader Jagmeet Singh.

Well, it appears when Jagmeet Singh takes a break from Tik Tok he can get something done. After publicly condemning his own family member, his brother-in-law suddenly claims to have not understood where he was donating THIRTEEN THOUSAND DOLLARS to. pic.twitter.com/DUQzP0xQr0

As for politicians who support the convoy, a few are speaking up.

Of note is Conservative MP Pierre Poilievre who pointed out hypocrisy in the mainstream media regarding how they’re labelling the convoy participants as “extremists.”

Conservative MP Pierre Poilievre pointed out that CBC employees have accused the company of systemic racism, "and yet we don't see the media here generalize the CBC as racist."https://t.co/j8qGanSZ1L

Canadian mainstream media and many politicians continue to condemn the convoy, claiming it is full of bigots and racists, among other labels. However, in a small win, one statement as reported by Parliament Today from national security expert Jessica Davis warning those who donate to the convoy that they may be supporting ‘terrorism,’ has been removed.

Despite the loud criticism from some angry keyboard warriors, though, support continues from all over the world. Podcasters, pundits, and even folks who don’t give a darn about politics are talking about this massive protest.

Elon Musk even weighed in to throw some support behind the truckers!

For up-to-date information, please continue to check www.ConvoyReports.com where we will let you know what is happening as the epic journey continues!

Also feel free to tune into the recording of today’s livestream with Sheila Gunn Reid and Matt Brevner as they discuss more of what is going on with the truckers protest for freedom.