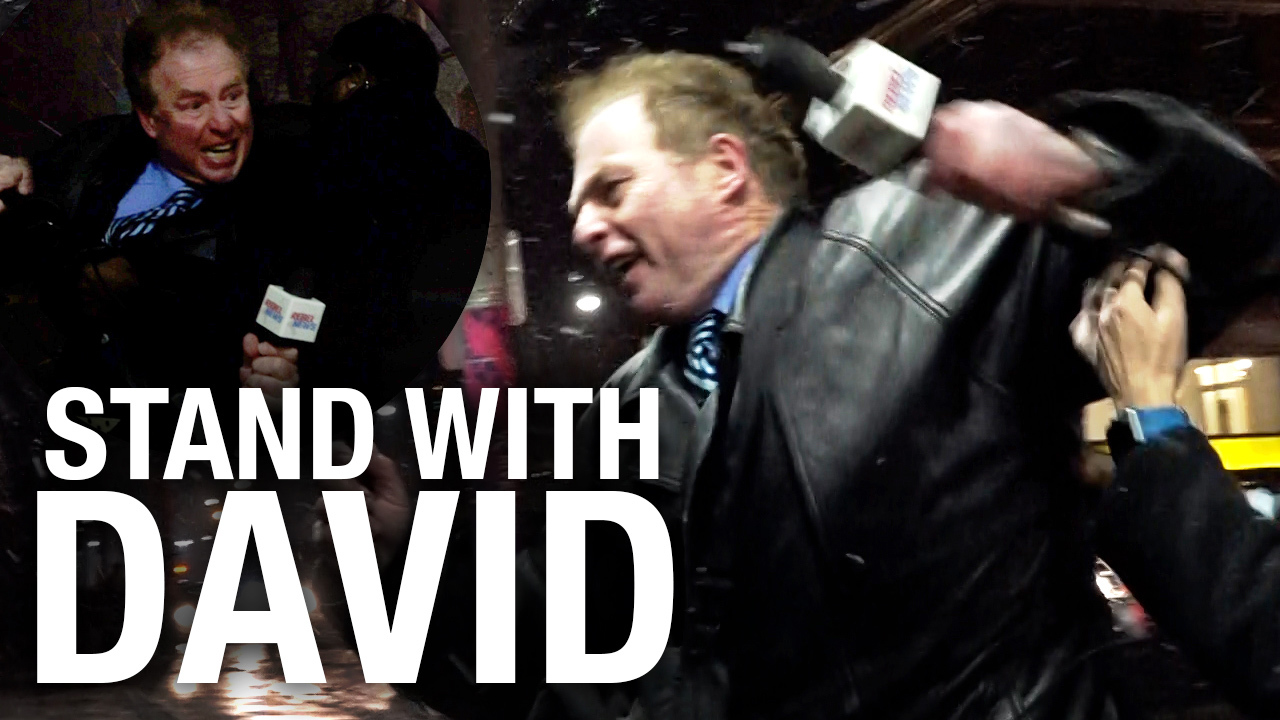 If you agree that the RCMP has no right to treat innocent journalists like criminals, please sign the petition on this page.

If you agree that the RCMP has no right to treat innocent journalists like criminals, please sign the petition on this page.

David was standing on a public sidewalk outside a public event where Trudeau was going to a Liberal Christmas Party. David was doing what all media do — waiting patiently to call out a question to Trudeau as he walked in.

But then, a not-so-funny thing happened when Justin Trudeau's carbon-spewing motorcade pulled up to the Brickworks Ciderhouse. David was swarmed by several members of his Royal Canadian Mounted Goon Squad. In fact, so fast and so vicious was the assault that he never even caught a glimpse of the PM.

He was manhandled, he was shoved, his head was slammed into a wooden fence, his hands were cut open, and his equipment (and wristwatch) were damaged.

David had to go to the doctor later that night — his ears were still ringing, and he was bloodied and cut.

There is no excuse for this.

The crime was committed by Trudeau’s thuggish bodyguards — who knew they were doing something evil and refused to tell David their names, despite the legal requirement to do so.

They beat him up just because he was with Rebel News, and Trudeau has let the world know Rebel News does not deserve respect.

This is the worst thing that has happened to a Rebel News reporter in our seven years. We’ve had street thugs and Antifa members attack our reporters. But never a government bodyguard.

The Toronto Police Service came quickly, but they refused to lay charges against Trudeau’s thugs, despite the assault being caught on video. They know it would be career suicide to cross Trudeau.

So, we have to go to court ourselves. We filed a lawsuit on behalf of David. Click here to read it for yourself.

Please help us fight back for David. It’s not just David who got beat up by Trudeau; it’s the very idea of a free and independent press, and the right of non-government journalists to ask questions of our political class.

If you agree that the RCMP has no right to treat innocent journalists this way, please sign the petition on this page.

You can also chip in to cover our lawsuit against Trudeau — we’re suing the RCMP, the three officers involved.

This lawsuit is easily going to cost over $75,000. But this isn't about making money for David Menzies, it is about principle. You can chip into our legal fund by clicking right here.