Positivity abound in Ottawa and beyond: A quick look at today's events

After a week of immense anticipation, the convoy arrived in Ottawa to massive crowds and support, and was backed by cross-country solidarity protests and convoys. 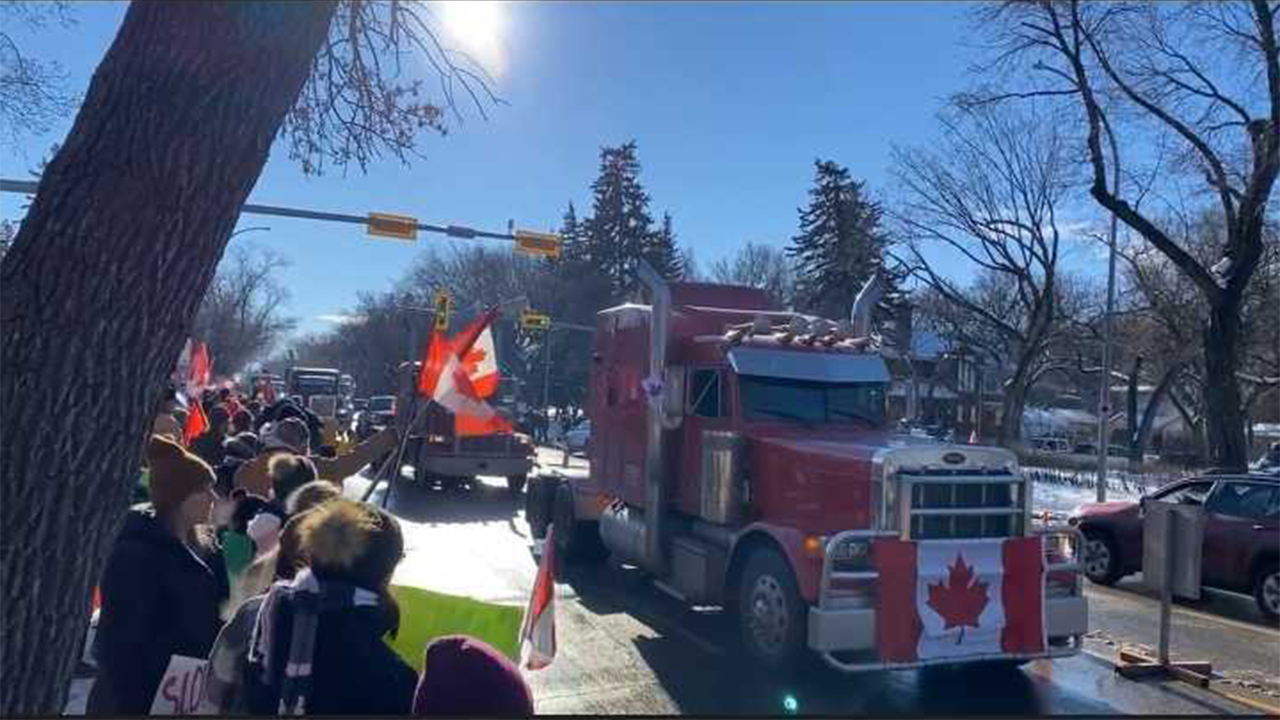 It isn’t so simple to pick out just a few highlights from today’s events at Parliament Hill and around the country, but here are some of the gems.

Let’s start off with a big “win” in the Canadian freedom battle overall.

The Rebel convoy livestream hosted by Sheila Gunn Reid kicked off at 12:30 p.m. ET (it has been viewed by over 250,000 people as of time of this report, and counting!).

Saskatchewan reporter Kelly Lamb hopped on near the beginning to join Sheila in announcing some amazing news: Saskatchewan Premier Scott Moe has released a statement strongly supporting the truckers in their wish to end the cross-border policy for proof of vaccination. This letter included the shocking announcement that due to the COVID-19 vaccine’s limits in reducing transmission, “in the not-too-distant future” he will end the proof-of-negative test/proof of vaccination policy in Saskatchewan.

That is good for morale, eh?!

Today, trucker rallies are being held at many locations across the country, including on Parliament Hill in Ottawa and in various communities in Saskatchewan.

Here is my message to Saskatchewan and Canadian truckers: pic.twitter.com/LifQ2FK23b

So now to Ottawa, where the many Rebel reporters enthusiastically were live on the scene, despite extremely cold temperatures.

Between the cold and the massive crowds, tech issues were common, but that didn’t damper our reporters spirits! The energy was magnetic and contagious from the get-go.

As outlined in yesterday's compilation article, many protesters arrived a day early on Friday to start up the big events. Our journalists and staff worked hard well into Friday night and into the wee hours of Saturday morning, either speaking with people or editing.

Our team was out on the streets of Ottawa or working on stories/editing well past 2:00 a.m. They're back out there again this morning

It's a big job telling the other side of the story and counteracting the lies of the MSM/politicians about the convoy.

I couldn't be prouder.

Early this morning, Ezra Levant was out showing some of the lengths the City of Ottawa had gone to in an effort to manage this protest.

Streets had been blocked off, at times quite garishly with equipment like a street scraper, ensuring the truckers could not enter certain areas.

Also, the Centennial Flame had been turned off despite frigid temperatures of about -22°C.

Why? Who knows, but perhaps they weren’t too keen on keeping the protesters warm. Certainly, other regions have gone to great lengths to stop people from supporting this convoy, such as in Nova Scotia.

"The officials are doing everything they can to make this convoy ineffective."@EzraLevant is live in Ottawa with many other Rebels to bring you the other side of the story!

"It's -22°C and they turned off the Centennial Flame because they don't want the protesters to say warm."@EzraLevant is live from Parliament Hill in Ottawa.

A few photos took the Internet by storm early on in the day, including this one of a Confederate flag, which many used as an opportunity to “prove” that this convoy is full of racists and bigots. Many speculate it was planted; others recognize it is one photo of many. Sheila took it in stride with her typical witty sarcasm.

The smear campaigns continued throughout the day from media, politicians and citizens alike.

We won’t waste precious time on the negative since the positive overwhelms it, but of note is NDP leader Jagmeet Singh, who posted a statement about the commemoration of five years since the Quebec City mosque attack, using this to smear the convoy, claiming it is “led by those that claim the superiority of the white bloodline and equate Islam to a disease.”

Today we commemorate 5 years since a terrorist attacked and murdered Muslims in a Quebec City Mosque.

And, today Conservative MPs have endorsed a convoy led by those that claim the superiority of the white bloodline and equate Islam to a disease.

In contrast to Singh's words, an abundance of footage of the amazing diversity in this convoy is readily available online to disprove him.

Very small opposition to the freedom convoy has arrived in Ottawa.

Indigenous #ConvoyForFreedom2022 supporter in Hamilton on the movement:

"never in history, when rights have been taken away, have they ever been given back willingly. We are fighting for the freedom of everyone in Canada."

The media has been getting desperate lately, including the CBC now adding to the usual “racist” narrative to one that many haven’t heard since the “Russian Collusion” hoax in the 2016 U.S. presidential election.

But in reality? This movement is full of real people with real concerns! And there are a LOT of them. Check out this footage from Lincoln Jay, Alexa Lavoie, Dakota Christensen and Mocha Bezirgan:

Despite freezing weather (-23) a “small minority” of #TruckersForFreedom2022 and tens of thousands of supporters across Canada have come to show their opposition to Trudeau’s “immoral” infringements on their freedoms.
The atmosphere of unity keeps them warm. More are on their way pic.twitter.com/ER3FtbXmP5

This is what is happening right now in Ottawa!
This is completely crazy. Thousands and Thousands of people are there!

This is crazy. Absolutely packed outside of parliament in Ottawa. I haven’t seen streets this packed in Canada since the Toronto Raptors won the NBA finals. #ConvoyForFreedom2022 https://t.co/8hpC710hZK@RebelNewsOnline pic.twitter.com/Pqc7v90yZT

The crowds in front of parliament in Ottawa right now.

The streets are PACKED with vehicles and crowds of supporters.

The energy in the air is palpable.

All peaceful, all positive — and oh-so-polite amongst the mobs of people.https://t.co/KMTIfkoh9C pic.twitter.com/mztxNeqdXJ

"I'm here to stop all mandates and have @JustinTrudeau put all his stuff in the back of my bin... We're not going until it's done."

Check out https://t.co/Apz9xNQUhJ for more and donate to support our independent journalism. pic.twitter.com/dL3KNL1qJo

Meanwhile, Prime Minister Justin Trudeau continued to stay out of dodge, which was reported worldwide by a number of outlets, who liked to focus on the “security concerns” — despite the event being extremely peaceful and well attended by Ottawa police.

A Parliament of cowards is hiding from its voters. pic.twitter.com/Vunt7TyQW6

As I said, there are too many highlights to cover even a fraction, but here are a few great examples!

Tens of thousands started to gather in the nations capital to protest vaccine mandates pic.twitter.com/qIgoji7oXK

A ‘small fringe minority’ you say?

WATCH: Defiance and resistance at Parliament Hill — but no anger or rage in the 17°C air! Ezra Levant is live from Ottawa.

A very nice family let me into their mobile home, parked with all the trucks on Wellington St. just down from parliament.

They're here with the convoy for the long haul.

Everyone on the ground is so positive and so amicable.

Coffees, pocket warmers, Tim Hortons gift cards, and homemade goods brought from all across Canada are among the things being disturbed to the truckers.

The truckers say they are here to stay and not leaving until segregation is abolished.

Droves of police out and about, all of the one's I've seen are supportive and peaceful.

Says he's just here to keep the peace and make sure everyone stays warm and safe.

But they're enjoying this I think. Closeted supporters IMO.https://t.co/KMTIfkoh9C pic.twitter.com/vahzAaFLAU

Around the country while this was going on in Ottawa, supporters gathered in all kinds of protests.

In Calgary, reporters Kian Simone and Adam Soos captured some of that action on the ground where around 4,000 people gathered.

Calgary standing in solidarity with the truckers. The energy here is amazing.

Our team is around the country covering these protests.

Truckers who couldn't make it to Ottawa are circling Calgarians who stand against mandates. pic.twitter.com/mJpT4Hv8Fs

The scene in Calgary right now! Thousands rallying in solidarity with the truck convoy as it pours into the streets of the capital. This is the biggest "fringe" I have ever seen.

The thousands of Canadians in Calgary sing the national anthem.

You could likely almost hear them in Ottawa.

Like the convoy, for as far as the eye can see Calgarians take the streets.

Meanwhile, at the U.S./Canada border at Coutts, Alberta truckers clogged up the border in support of the convoy.

Trucks in both countries clogged up the Coutts, AB border crossing today in protest of the vaccine mandates on truckers in Canada and the United States.

We aren't just united as Canadians. We are united as free people everywhere. #freedomconvoy22

Hamilton, Ontario also saw a crowd of supporters, as covered by Efron Monsanto:

The scene in Hamilton, Ontario right now. Supporters of the #freedomconvoy22 have gathered outside city hall in solidarity.https://t.co/cTm6cKHpsA pic.twitter.com/QKQNwyhIDZ

In Saskatchewan, there were gatherings, which included a large protest and convoy that headed to Regina to the Legislative Building. The Prairie folk really brought their spirit with them!

Some footage from the Regina #TruckersForFreedom2022 convoy today, with a big thank you to Keely in southern SK for the footage!

More photos and videos to come over the next few hours and days.

The whole country is abuzz. pic.twitter.com/DTiizcLjNp

Some photos from the Regina #TruckersForFreedom2022 protest footage.

Back in Ottawa, Rebel boss-man Ezra Levant gave an inspirational speech to a cheering crowd:

I was invited by the truckers to give a short speech. Here’s what I said: pic.twitter.com/ZYclZwDBtH

And the energy in the city continued! Protesters filled restaurants and establishments, with the police not bothering to enforce proof-of-vaccination policies or masks in most places. Something has shifted in Ottawa!

The convoy has brought democratic opposition back to Ottawa. It has revitalized the moribund hotel industry. And 100,000+ freedom lovers have de facto ended mask and vax passport rules. I’m “illegally” eating in a packed restaurant. Police are turning a blind eye. pic.twitter.com/vjjbnGa5Pt

This just a tiny slice of the incredible footage that Rebel obtained over the course of the last 24 hours.

More footage will be coming out in the coming days, so please make sure you’re following our reporters on social media, and head over to www.ConvoyReports.com to support our journalism and keep up with what we are up to while this continues to unfold. 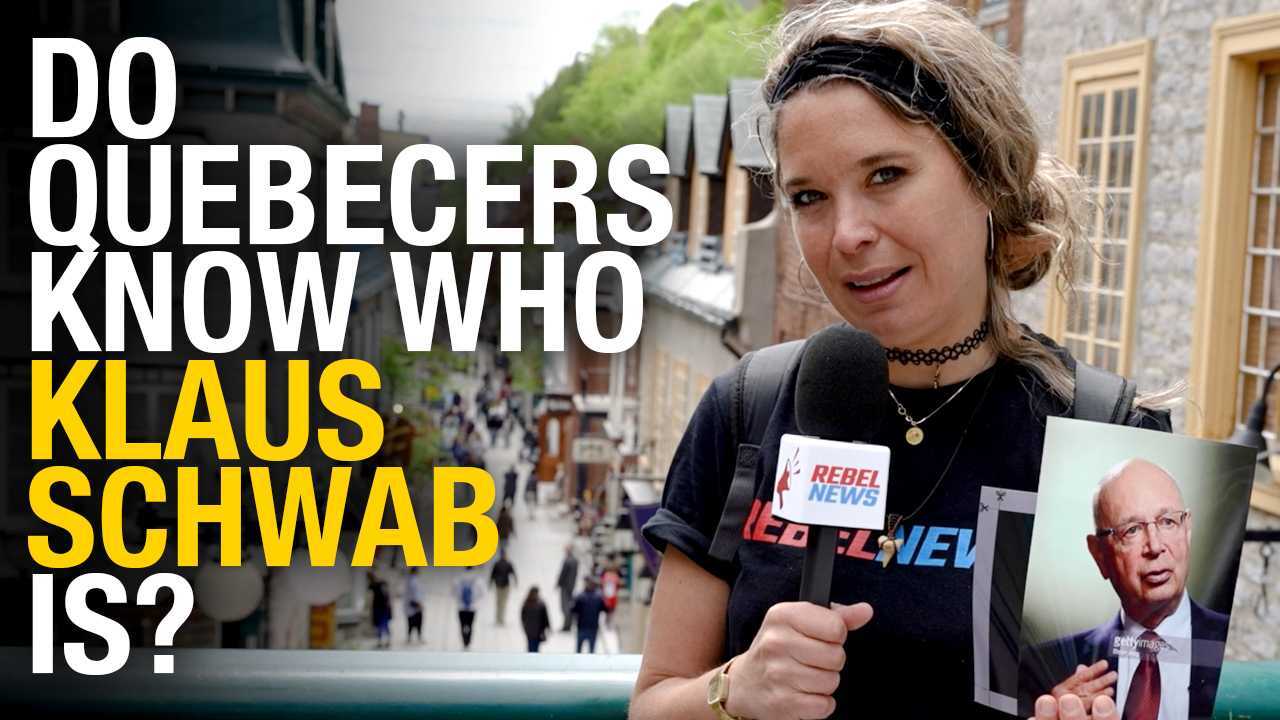