Trudeau's announcement of $1 billion in federal funding for provinces to implement a COVID vaccine passport was the main issue for many protesters. 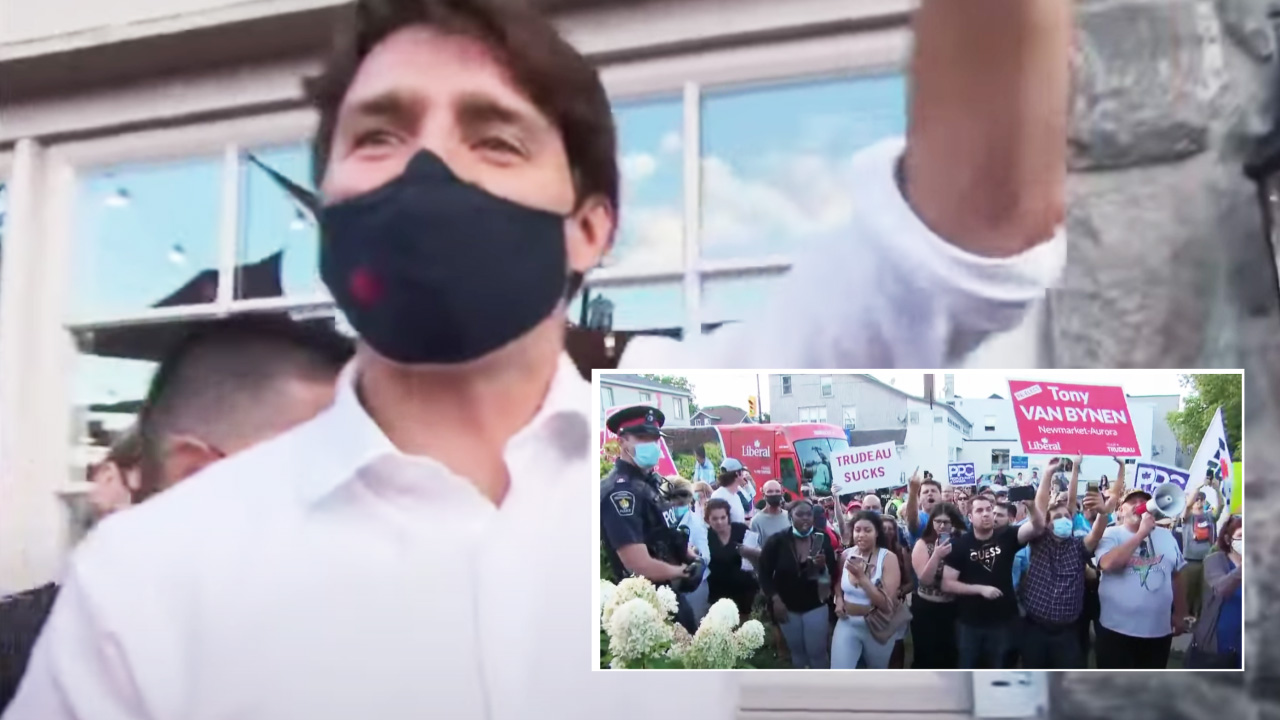 Learn More
Remove Ads
Justin Trudeau has recently stopped appeared in public spaces, due to being heckled constantly while on the campaign trail. His recent visit to Newmarket, Ont. was the first in over a week where he met with his supporters in the open, not behind closed doors and with limited access to the public.

Trudeau is heckled whenever he shows his face in public. This time at his campaign stop in Newmarket Ontario. He has announced a billion dollars to prop up vaccine passports all over Canada.

Trudeau's announcement of $1 billion in federal funding for provinces to implement a COVID vaccine passport was the main issue for many protesters. Trudeau has also openly called for and proudly supports the medical segregation of the unvaccinated.
Advocates for vaccine passports for commercial flights and interprovincial trains say the implementation of such a policy will avoid putting vaccinated travellers "at risk," despite reports that indicate that fully vaccinated people can still spread COVID regardless.
Trudeau calls these restrictions of liberty in Canada "consequences" for not making the "right choice." He added at a gun policy announcement that it is "unfortunate" that the unvaccinated are "clogging up" medical resources and taking them away from those who "did their work," i.e. got vaccinated.

EXCLUSIVE: Trudeau booed mercilessly as protestors congregate in front of Liberal Party tour bus in Newmarket. Some PPC signs seen but I’m sure this is Stephen Harper’s fault. #TrudeauHeckled pic.twitter.com/HcaXVgrgZ8

Trudeau has been met across the country by protesters who are against his policies and hypocritical campaigning during an alleged fourth wave of COVID-19. Rebel News' Tamara Ugolini was up close and personal with him at a campaign stop in Coburg, Ont. where the heckling was first seen by the public.
Chief Videographer Mocha Bezirgan reported on indigenous activists physically blockading the prime ministers' campaign bus, forcing Trudeau to evacuate and change his schedule.
Video journalist Matt Brevner asked several hard-hitting questions directly to Trudeau in White Rock, B.C. when the locals there ran the prime minister out. Reporter Drea Humphrey was also barred by a Liberal staffer from speaking to Trudeau as a member of the media at a different B.C. campaign stop.
The leader of the Liberal party only responded to our Quebec-based reporter, Alexa Lavoie. In response to Alexa asking how long the proposed vaccine passport is meant to be in place for, Trudeau told her to "get vaccinated." Apparently, Trudeau doesn't like to answer questions from media outlets that haven't been bought and paid for.

Trudeau heckled as he ends his campaign stop and walks back to his bus.

After demonizing the protesters as "those people" in a speech last week, Trudeau has tried to not show his face in public as it draws large crowds of hecklers. In the above clop, Trudeau quickly touches elbows with Liberal supporters at a local restaurant in Newmarket, Ont. In the background, you can hear the roar of protesters. As he drives off in his motorcade, the crowd shouts out "Coward!"

Despite the media's attempt to demonize any critics the prime minister faces in person, in response to his announced policies, there have not been any acts of violence at any of the protests. Throughout this past summer, however, there were over 50 churches burned down in response to news of the unmarked graves on the grounds of former residential schools in B.C. Trudeau's former principal secretary and best friend, Gerry Butts, called the arsons "understandable." Trudeau himself, after several churches had burned, was pressured into make a statement after receiving backlash from Canadians. As of now, there is no current federal investigation into the churches that were burned.

No Terry, it is not. Though it may be understandable.

Head over to RealReporters.ca to see how you can support our 2021 Canadian election coverage! We will show you the other side of the story, which the bought and paid for media will never do.
Spread the Word!
Justin Trudeau Canada Liberal Party of Canada Canadian Election 2021